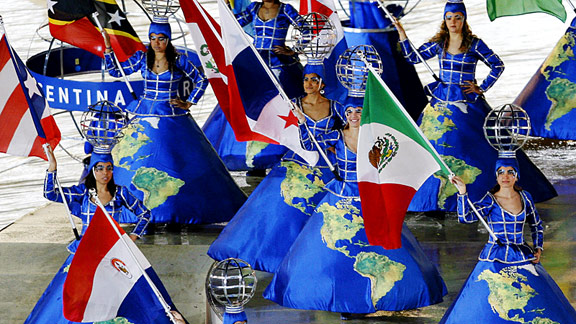 The Pan American Games (more commonly known as the Pan Am Games) is an Olympic-style sporting event staged every four years that features athletes from countries throughout the Americas in various sporting competitions.

Organized and overseen by the Pan American Sports Organization (PASO) -- made up of 42 nations from South, Central, and North America as well as the Caribbean -- the Pan Am Games includes hundreds of events in more than 30 different sports, with medals awarded to the top three finishers in each competition.

The first edition of the Pan Am Games was staged in Buenos Aires, Argentina in 1951, but the concept for such an international competition had been under consideration for decades before its inception.

During an Olympic Congress held during the 1924 Summer Games in Paris,members of the International Olympic Committee from Cuba, Guatemala and Mexico proposed the creation of a similar, regional sports event in which Central American countries would participate.

Two editions of the Central American Games were held -- in Mexico City in 1926 and Havana in 1930 -- before another proposal was introduced during the 1932 Olympic Games, when representatives of Latin American delegations suggested a regional games for all the Americas. That proposal led to the establishment of the Pan American Sports Congress, which held its first meeting in 1940 and selected Buenos Aires to host the inaugural Pan Am Games in 1942, but World War II caused the games to be postponed.

Interest in staging the Pan Am Games picked up again after the war; a second Pan American Sports Congress, held during the 1948 Olympic Games in London, set up plans to give Buenos Aires another chance to serve as initial host, and in February of 1951, 22 countries and over 2,500 athletes participated in the inaugural Pan Am Games. Host nation Argentina topped the medals table, claiming 68 gold medals and 154 total medals throughout the two-week competition.

Set up to be held every four years (in the year prior to each Summer Olympics), the Pan Am Games then moved to North America for its next two editions -- with Mexico City hosting the event in 1955 and Chicago staging the games in 1959 (replacing original host Cleveland, Ohio). The U.S. team collected over 100 gold medals in dominating the medals awarded in events encompassing 18 different sports that year.

The competition began to grow in scope and popularity during the 1960s, as Sao Paulo, Brazil and Winnipeg, Canada took turns at hosting the regional event. The sixth edition of the Pan Am Games, held in July and August of 1971 in Cali, Colombia, marked the first time that more than 30 nations participated in the competition.

In 1975, Mexico City became the first city to host the Pan Am Games for a second time. Santiago, Chile had been originally been awarded the games, but had to withdraw for financial and political reasons. Fourteen years later, Winnipeg became the only other city to host a second time, when 42 nations and approximately 5,000 athletes took part in the 1999 edition.

The U.S. team has continued to dominate the medals awarded in competitions at each Pan Am Games, consistently outdistancing other countries in the medal counts at each event. Besides the inaugural edition, the only other time the U.S. did not capture the most gold medals was in 1991, when host nation Cuba collected 140 to the U.S. team's 130 golds.

The number of participants and medal events continues to grow with each edition. The 2007 Pan Am Games, with a budget of 2 billion dollars, was the most expensive in the event's history and helped host city Rio de Janeiro, Brazil complete successful campaigns to gain hosting duties for the 2014 World Cup and the 2016 Summer Olympics.

Guadalajara, Mexico is the capital of the state of Jalisco, and is located in the western part of the Mexican Republic, in Jalisco's central region. Founded in 1542 and recognized as one of Mexico's most influential cultural, industrial, and economic centers, Guadalajara is renowned for its traditions and for its artistic, cultural, and recreational attractions.

Known as the "city of eternal spring," Guadalajara has hosted a number of international events, including the first Ibero-American Summit in 1991; the Latin America, the Caribbean and the European Union Summit in 2004; the North American Leaders' Summit in 2009 and the International Telecommunication Union Plenipotentiary Conference in 2010. Guadalajara was named American Capital of Culture in 2005 and Educator City in both 2006 and 2010.

Guadalajara will be the host of the 2011 Pan Am Games, the international sporting competition held every four years. Beaten out by Santo Domingo, Dominican Republic in the host city election process for the 2003 Pan Am Games, Guadalajara was awarded as 2011 host at the Pan American Sports Organization's general assembly meeting in June 2006. Organizers have since constructed new sporting venues, convention centers, hotel space and improved transportation to prepare for the Pan Am Games.

The Omni Life Stadium in Guadalajara, home of the Chivas football/soccer team, will host the opening and closing ceremonies of the 2011 Pan Am Games. Other sites in Guadalajara that will host various competitions throughout the event include new aquatics, volleyball and gymnastics centers, along with a basketball arena and a covered velodrome. Nearby cities and towns where other events will be staged during the 2011 Games include Tapalpa, Cuidad Guzman, Lagos de Moreno and Puerto Vallarta.

Sports and Events at the 2011 Pan American Games