I will still always remember her sitting in that news conference in Sydney, trying to tell everyone that her husband, C.J. Hunter, could be trusted, that he was a truth teller. He was trying to talk his way out of those positive doping tests, trying to spare America's golden girl guilt by association.

And nearby, there was a stranger to the public standing with them.

His name was Victor Conte.

As it turned out, he was practically part of the family. 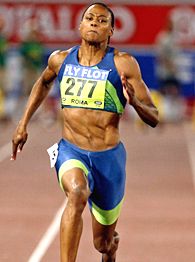 He was telling the truth about Hunter in 2000.

But then lying about Jones later, too.

So Jones' "B" sample has returned negative, contradicting her "A" sample test for EPO last month. What does that prove? Here's what it proves: At 30 years old, out of contention as a world-class athlete, out of BALCO's world, she isn't using performance-enhancing drugs.

She's clean now. Good for her, I guess.

Yet, you have every right to doubt the prime of her gold-medal-winning career. Since her husband (Hunter), boyfriend (Tim Montgomery) and coach (Trevor Graham) were implicated in major drug scandals, you have every right to wonder whether she was something more than an innocent bystander. Her life has been so intertwined with drug cheats, with dealers, that it's impossible to ever believe she was pure. That's just a fact.
It is ridiculous to suggest that there's any test in 2006 that's going to exonerate Marion Jones' legacy. Truth be told, that test doesn't exist in the real world. You refuse to believe Hunter and Conte when they detail her alleged drug use? When they give times and places and exact details, when the documentation was all over BALCO files? Come on.

Who else do you think would have firsthand, eyewitness accounts of her alleged usage?

Well, yes, of course it's Hunter. And it's Conte. They were her partners in everything.

They were her life.

These passages come right out of "Game of Shadows," the devastating, groundbreaking book by authors Mark Fainaru-Wada and Lance Williams: "Hunter said he watched Jones inject herself with drugs at the residence they shared in Australia. After an injection, Jones would flush the syringe down the toilet. The steroids caused Jones to break out in acne, Hunter said. To hide it, she began wearing makeup, something she had never done before.

"...Conte also appeared to be pretesting Jones to ensure she wouldn't fail a drug test at the Games. According to BALCO documents, a urine sample from Jones was sent by overnight mail to Quest Laboratories in San Diego two days before the Opening Ceremonies."

And there was this: "Like Montgomery, Marion Jones continued to use banned drugs in 2001, according to accounts by Conte and Hunter and BALCO documents with her name on them. On April 21, 2001, Conte said he met with Jones at the Embassy Suites hotel in Covina in Southern California. Jones came to his room so he could show her how to inject growth hormone with a new instrument, a $1,000 NovoPen injector. Conte said he watched Jones inject 4.5 units of Growth into her quadriceps."

What's more, the book detailed, "The doping calendars laid out, via Conte's alphabetical code, Jones' use of The Clear, EPO, Growth and insulin."

So, there was a problem with her test in 2006. And now the "B" sample clears Marion Jones for this year. It allows her to compete. That's nice and all, but there's no test that exonerates her legacy. Her lawyers don't get to issue a statement, as they did Thursday night, and make that right again.

She made her reputation.

Whatever she thinks, Marion Jones still gets to live with it.

Adrian Wojnarowski is a columnist for The Record in N.J., and a regular contributor to ESPN.com. He can be reached at ESPNWoj10@aol.com.