LAUSANNE, Switzerland -- Liu Xiang of China set a world
record in the 110-meter hurdles on Tuesday, breaking the record he
shared with Britain's Colin Jackson. 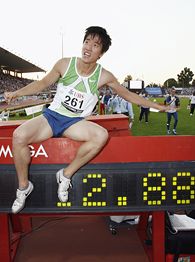 Liu's time of 12.88 seconds at the Athletissima Grand Prix
meeting was .03 better than the record he matched in winning gold
at the 2004 Athens Olympics. Jackson ran 12.91 in Stuttgart,
Germany, in August 1993.

Marion Jones won again in the women's 100, her sixth victory in
eight meets this season, leading a U.S. sweep of the top four
places in that event. In the men's 200, American Xavier Carter ran
the second-fastest race in history.

Dominique Arnold of the United States was second in the hurdles
in 12.90, also faster than the previous record.

Liu, who also holds the world junior record of 13.12 set in July
2002 in Lausanne, ran a victory lap -- shirtless and waving to the
crowd -- before sitting on the track clock that showed his record
time.

"It is my place of good luck and joy," Liu said. "It is where
I won four years ago with such a good time. I always feel so good
here."

Liu's record performance came three days after he struggled to a
fourth-place finish at the Gaz de France meet outside Paris.

"I can't believe it, I can't express it," Liu said through a
translator.

"I had a good start, and after the first five hurdles it was a
perfect race," he said. "I wanted to break the record last year,
but it wasn't working. I think I can still run even faster."

Jamaica's Sherone Simpson, the only woman who has run faster
than Jones this year, withdrew hours before the race because of
injury. Organizers said she did not give details about the injury.

Countryman Tyson Gay was runner-up with a personal best of
19.70, while Usain Bolt of Jamaica, the junior record holder, was
third in 19.88, also a personal best.