"Have you been reading the paper?" Whetstine asked.

"Not really," Aviani replied. "Not really at all."

"Well," Whetstine said, "they're blaming me."

The phone went silent, until Whetstine finally went on to explain that Gatlin's coach, Trevor Graham, had accused Whetstine of purposely rubbing a testosterone-laced cream over his client's body at the Kansas Relays in April, which Graham said prompted Gatlin's positive test for testosterone or related substances.

Aviani, who works with '96 Olympic gold medalist Allen Johnson (110-meter hurdles) as well as a number of University of South Carolina athletes, couldn't believe it. He still can't. In fact, almost a week after the story broke, few in the track and field community are buying into Graham's conspiracy theory, in which he alleges Whetstine held a grudge against Gatlin and so used the testosterone-laced cream without Gatlin's knowledge as an act of sabotage.

"He's the scapegoat," Aviani said about Whetstine. "And for all the years he's spent in the business, for all the time he's worked with Justin and other Nike athletes, that's a shame. Chris is a good guy. And Trevor Graham is just tossing him under the bus."

Aviani isn't alone with that opinion. The number of people with an intimate understanding of what takes place behind the scenes at a world class track meet is limited; but ESPN.com spoke to several of those individuals this week and few buy into the "massage therapist with a grudge" theory.

"Justin has been a gold mine," said massage therapist Benny Vaughn, who has worked in the field for 30 years, including stints with USA Track and Field at the '96 and 2004 Olympic Games. "Why would you blow up the gold mine? Why would you even think of that? If I had an investment that had a great return going, why would I mess with that? It just doesn't make sense. I can't see Chris making a mistake like that."

The 42-year-old Whetstine has worked with elite athletes for over a decade. He traveled with Marion Jones during 1998-2001 and with Gatlin since 2003. He's also worked with professional golfer Ben Crane, and he helped Sean "Puff Daddy" Combs prepare for the 2003 New York Marathon. But he's best known for his work with Gatlin; in track and field circles, he's known as, "The Nike guy" or "Gatlin's guy."

"Chris would just follow [Gatlin] around," said Dr. Peter Grimes, a sports performance chiropractor who worked with Gatlin at the World Championships in 2003 and the Olympic Games in 2004. "That's what it looked like -- 'Justin's in there, then I'm going with him.' We would laugh, 'Here comes the dog and he's pulling his followers.' It cracked us up. But there was never anything negative. And with that relationship, this is so far-fetched for me. I couldn't see him doing that to Justin."

Perhaps that's part of the reason Gatlin's Manhattan-based attorneys have distanced themselves from Graham's accusations, saying earlier this week that, "Trevor's comments didn't come from us."

And perhaps that's the reason Whetstine, according to his attorney, Elizabeth Baker, has met with Gatlin's investigative team and is providing any explanations and materials -- including lotions and creams he used in his massages -- that they have requested.

"He is fully cooperating," Baker said of Whetstine. "But it's very difficult with all these people involved. It's difficult to comment on what all these third parties are saying. And in this case, there are a lot of third parties."

None more important than Graham, the controversial track coach. In an interview with ESPN.com's Mike Fish this week, Graham, who has coached at least six athletes who have received drug suspensions, said he believes someone may have paid Whetstine to sabotage Gatlin's career. 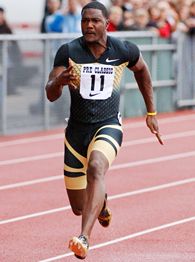 "We're looking at everyone," Graham said. "Right now, everyone is a suspect."

Graham contends that at the Kansas Relays, Gatlin was heading for doping control when Whetstine intervened and insisted the sprinter needed a quick massage. Graham said Whetstine then pulled a tube out of his pocket with a crooked "S" on it and applied the cream to Gatlin's inner thigh and the back of his knee.

"I walked over to him and just gave him this look like, 'What the hell is going on?'" Graham told ESPN.com. "He turned his back and kept turning around. So we went on to doping. I looked back at Chris and Chris is packing up his table real fast, trying to get out of there."

In response to Graham's claims, Baker said, "You have to look at who's doing the talking."

But is this even possible? Could that even happen? Possibly yes, but likely no.

Grimes is one of the few people who has been inside Gatlin's prerace circle. He has been in the sprinter's secluded Nike tent, massaging and fine-tuning Gatlin's sculpted body. Grimes describes a scene that has the track star lying on a table, listening to a Walkman and seemingly oblivious to the outside world.

As Grimes sees it, Gatlin's laid-back, ultra-focused prerace ways might have made him an easy target.

"If I was working with Justin, doing some soft tissue work, he wouldn't have any idea what I was using on him. He would never know," Grimes said. "If you were setting someone up, that would be the perfect person to do it. There's no way if an athlete would know if it's homeopathic or something illegal."

In addition, Grimes said, competition is tense. People are always gunning for the man on top. Behind the scenes, it isn't unusual for competitors to argue with one another or play mind games with their opponents.

"At that level, people want to take shots at you any chance they get," Grimes said. "There's not a lot of room at the top; so if somebody feels they have an edge or can do something to pull somebody back, that might occur. That's why the athletes only work with people they trust."

According to Grimes and others, the fortress built around Gatlin before he runs makes it unlikely that a foreign substance could come from anywhere besides Gatlin's inner circle. Strangers don't get anywhere close to Gatlin before he runs. And massage therapists are extremely particular about their lotions and creams; even the slightest change in consistency would raise a red flag.

"Justin is so protected; he's so covered," Vaughn said. "You can't hardly get near Justin at a track meet. They set their table up way off from everybody else. You start approaching and their people get up and try to block you. He's just so covered."

Said Aviani: "There's no way this was something that was slipped in. That's not possible."

But that hardly means Whetstine is responsible. As Nike marketer and famed distance runner Alberto Salazar points out, Graham would have intervened as soon as he noticed anything even slightly suspicious.

The incident allegedly occurred on April 22, but Salazar contends that Whetstine continued to work with Gatlin leading up to the U.S. Track and Field Championships in June.

"Trevor is a world-renowned, legendary coach," Salazar said. "Right then and there, if he sees somebody acting strange and putting something in his pocket, he's going to put a stop to it and figure out what the heck is going on. It wouldn't go any further than that. And Chris would never get close to Justin again."

Beyond that, there are questions about when Graham and Gatlin found out about the positive test. According to the approximate timelines and notices for a positive test on the USADA Web site, Gatlin and Graham likely heard of the first positive "A" sample anywhere from two to six weeks after the test was administered on April 22. So then why did Graham allow Whetstine to work on Gatlin prior to the U.S. Championships, as Salazar said Whetstine did?

"It's ridiculous," Salazar said. "He never would have gotten anywhere near Justin."

About the supposed grudge, Salazar confirmed that Whetstine had a business dispute with Nike last winter over some unspecified contract issues. Graham and Gatlin weren't happy about the situation, Salazar said, but it was resolved.

"And Chris went back to work on Justin," Salazar said. "It was all over. And any grudge wasn't even with Gatlin -- it was with Nike."

The bizarre saga took another twist on the night of June 22, when Whetstine says he was assaulted by Nike representative Llewellyn Starks outside the Westin Hotel in Indianapolis. According to police documents, the two had been exchanging words when Starks became irate and attacked Whetstine. The masseur was taken to a nearby hospital with a broken nose, a dislocated thumb, a sprained ankle and a concussion. The thumb injury required surgery, and Whetstine has yet to return to work. Detective Skye Griffin of the Indianapolis Police Department says the investigation is still underway.

"He told me he's not sure if he's ever going to be able to return to work again," Aviani said. "He may never be able to do a massage. He told me he might be heading back to school to study something else."

"He's having a very difficult time right now," Baker said. "This is professionally stressful, personally stressful. Aside from all this, he's pretty physically overwhelmed as well."

Several people close to Whetstine said they don't believe there's a link between the alleged incident at the Kansas Relays in April and the altercation with Starks in Indianapolis in June. But that doesn't keep them from scratching their heads and wondering about this strange chapter in one of the more bizarre tales in recent sports memory.

The masseur with a grudge.

"You can't help but laugh," Salazar said. "It's just preposterous on so many fronts. I guess anything's possible, but it just doesn't make sense. There's no way in the world."

Wayne Drehs is a senior writer at ESPN.com. He can be reached at wayne.drehs@espn3.com. ESPN.com investigative reporter Mike Fish also contributed to this report.