ZURICH, Switzerland -- Asafa Powell needed three days to get to this meet because of all the airline disruptions in Europe. 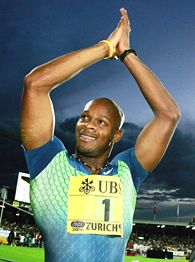 When he finally arrived, he was as fast and flawless as ever.

The Jamaican equaled his 100-meter world record at the Weltklasse Golden League meet on a balmy Friday night, the third time he has run the distance in 9.77 seconds.

"I knew I had something special, but I didn't know so fast," Powell said. "I'm the only one who has ever run 9.77 three times. I ran a world record three times. If I'm going to continue to run 9.77 for the rest of career it's not a bother to me."

Still, he's confident he can go even faster.

Powell led from start to finish and was followed by two Americans -- Tyson Gay in a personal best of 9.84 and Leonard Scott in his season-best 9.97.

Just getting to Zurich was an ordeal for Powell. His trip from Jamaica took three days because of disruptions caused by the alleged terror plot to blow up trans-Atlantic flights from London. He left Jamaica on Saturday and went by train from Paris to his summer training base in Italy.

Powell set the world record in Athens in 2004, with Justin Gatlin equaling the mark in May. Powell matched the record again a month later in Gateshead, England.

Gatlin was not at Weltklasse after testing positive for doping following a relay race in April. If Gatlin is found guilty, his world record would be stripped.

Powell has won all four of his Golden League events and is among nine athletes vying for a share in the $1 million jackpot. The prize is awarded to any athlete who wins his or her event in all six meets in the series.

Jones has raced five times in Europe this season, winning the 100 meters in Paris and Lausanne. She had been set to race in Zurich for the first time in two years after having been snubbed by the meet for her connection to the BALCO steroid scandal. Jones denies ever using banned substances.

American Sanya Richards, runner-up at the 2005 worlds in Helinski, also stayed in contention for a share of the Golden League booty, winning the 400 in 50.18. Olympic and world champion Tonique Williams-Darling was fourth.

Jeremy Wariner posted the second-fastest time this season in the 400, winning in 44.20. It also marked his fourth win in the series.

World champion Tirunesh Dibaba of Ethiopia kept alive her chances for a cut of the full jackpot, winning the women's 5,000 in 14 minutes, 45.73 seconds.

"The race wasn't easy," Dibaba said. "My time is not bad, but it was not really important, was it?"

Panama's Irving Saladino won the long jump for his third win in four Golden League events. He still has a chance of a cut of the smaller $500,000 jackpot, which requires athletes to win only five of six events.

Saladino won with a leap of 27 feet, 5¼ inches. South Africa's Mohamed Salman Al-Khuwalidi was second at 27-4½ while American Dwight Phillips was third at 27-0 3/4.

Ethiopia's Kenenisa Bekele won the 5,000 with a season world best of 12:48.25. Bekele shaved 3.08 off the previous world-leading time he had in Saint Denis last month.

Sweden's Susanna Kallur fell out of contention for the small jackpot after finishing fifth in the 100 hurdles. American Michelle Perry won in 12.65, followed by Jamaica's Brigitte Foster at 12.80 and Damu Cherry at 12.83.

Qatar's Saif Saaeed Shaheen, who had been hoping to break his own steeplechase world record of 7:53.63, won but failed to approach his mark of 7:56.54.