Justin Gatlin chose to cooperate with the U.S. Anti-Doping
Agency, a move that could help the sprinter's reputation but still
imperils his eligibility for the Beijing Olympics.

USADA handed down an eight-year ban to Gatlin on Tuesday, the
result of an agreement in which Gatlin accepts his positive tests
for testosterone or other steroids but retains his right to appeal
to an arbitration panel.

"We want to know how [the drugs] got there and see if it leads
to other people and other convictions. For us, that's the key
issue," IAAF spokesman Nick Davies told The Associated Press on
Wednesday. "We would accept eight years or even less in that case
-- but four years would be the minimum."

Even if Gatlin's suspension were reduced to two years -- a
possibility if arbitrators agree with his arguments -- it wouldn't
be in time for the 2008 Olympic Trials.

"We're shooting for something way less than two years," said
Gatlin's attorney, Cameron Myler. "The goal is to have him back on
the track as soon as possible."

World Anti-Doping Agency code calls for second-time offenders to
receive a lifetime ban. The eight-year penalty was handed down
because Gatlin's first positive drug test, five years ago, was
deemed an honest mistake and because he promised to cooperate with
other investigations being conducted by doping authorities.

The eight-year penalty was a small compromise by USADA,
considering Gatlin is 24 and would be too old to compete when the
ban is over. The Olympic and world champion will also lose the
world record he tied in May when he ran the 100 meters in 9.77
seconds

And when he appeals for a lesser penalty -- some time in the next
six months -- he cannot argue the test was faulty. 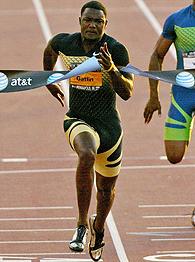 "To his credit, it's recognition that the science is
reliable," USADA general counsel Travis Tygart told The Associated
Press. "Instead of wasting a bunch of resources attempting to
create smoke where there's not any, he's acknowledging the accuracy
of the positive test, and in exchange for his agreement to
cooperate, we've recognized the nature of his first offense."

The first offense occurred while Gatlin was in college. He
stopped taking medicine to treat attention-deficit disorder a few
days before competition, but it didn't clear his system. He
received a two-year ban for that test, which was reduced by a year
because of the "exceptional circumstances" of the offense.

"The nature of Gatlin's first offense for use of his medication
puts this violation in a unique category," USADA chief executive
officer Terry Madden said.

Gatlin has said he didn't know how steroids got into his system
this time.

One of his attorneys, John Collins, said Gatlin would spell out
his case at the arbitration hearing. He wouldn't discuss strategy.

"The last time this happened, he went to the panel and
explained he neither cheated nor intended to cheat," said Collins,
who helped get that first ban reduced. "This time, we'll explain
the full stack of circumstances and everything around it and,
hopefully, we'll get a similar result."

He said the circumstances "indicate he deserves something far
less than eight years, if anything."

Collins wouldn't confirm the argument would be based on claims
by Gatlin's coach, Trevor Graham, who has contended Gatlin tested
positive after a vengeful massage therapist used testosterone cream
on the runner without his knowledge. Graham has been involved with
at least a half-dozen athletes who've received drug suspensions and
has been barred from U.S. Olympic Committee training sites.

The leader of USA Track and Field called Gatlin's case "a
setback for our sport."

"While we are glad Justin has taken responsibility for his
positive test and will cooperate in USADA's anti-doping efforts, we
are sorely disappointed in him," USATF chief executive officer
Craig Masback said in a statement.

USOC chairman Peter Ueberroth, meanwhile, said the penalty can
be a positive.

"Since becoming an elite-level athlete, Justin has talked about
the importance of eradicating doping in sport," Ueberroth said.
"By acknowledging his doping positive and agreeing to work with
USADA, Justin now has an opportunity to put those words into
action. He can play a meaningful role in solving a problem that is
reaching a crisis level in American sport."

USADA looks at this as a significant compromise.

The policing organization has a history of offering leniency to
those who help in its fight against doping. Though the agency
doesn't name names, Gatlin could possibly help USADA by providing
information on Graham, who has denied any direct involvement with
performance-enhancing drugs.

"He accepted liability," Tygart said. "He agreed not to raise
technical arguments or frivolous defenses. He has an opportunity to
go to a panel of arbitrators and argue exceptional circumstances."

In this case, the exceptional circumstances could be that he was
sabotaged, or has no idea how the steroids entered his system.

And if that defense doesn't work, Gatlin's willingness to
cooperate could also be viewed in a positive light.

"As Trevor has stated publicly, he completely supports Justin
Gatlin and Justin's cooperation with USADA and efforts to get
reinstated," Zeszotarski said. "Trevor knows he has done nothing
wrong in his relationship with Justin or any of his athletes, and
only wants the truth to come out."