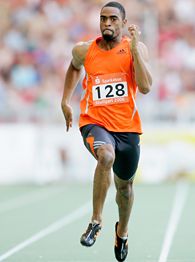 Tyson Gay joined exclusive company Sunday when he won the 200
meters at the World Athletics Final in 19.68 seconds. Only two men
have run faster times: the 19.63 clocked by fellow American Xavier
Carter earlier this year and the decade-old 19.32 mark Johnson set
in winning at the Atlanta Olympics.

"I believe it is attainable," Gay said of Johnson's record.

In the 400, Jeremy Wariner has been steadily closing in on the
seven-year-old mark held by Johnson, who is also his manager.

"Michael Johnson wants me to break it. I know he does. We will
see about that in 2007," Wariner said after winning the 400
Saturday to remain unbeaten this season.

However, all eyes were on Gay on Sunday.

After finishing third in Saturday's 100, Gay was blisteringly
fast through the turn and kept accelerating in the straightaway to
finish in a time also run by Frank Fredericks of Namibia.

"That was kind of crazy -- I never heard a crowd scream that
loud," Gay said of the reaction of the 30,000 fans during the
race.

Gay says staying healthy has been the key to his recent fast
times.

"I haven't been injured and I've been training consistently,"
Gay said.

The competition is heating up in the 200, especially after
Carter's 19.63 in Lausanne earlier this season.

"All the guys are motivated now," Gay said. "There should be
no ducking, no hiding."

The American is happy with his start and finish, but needs to
work on the bit in between.

"It is something in the middle that is missing," Gay said.

Poland's Monika Pyrek was second at 15-3.

Isinbayeva, who complained of fatigue, has three competitions to
set a 20th overall world record.

"With one week's rest," she said, "I won't feel tired at the
World Cup in Athens" next weekend. "I still have the world record
in mind."

Kenenisa Bekele put complaints about a long season aside to
cruise to victory in an exceptionally slow 5,000. The Ethiopian
took the lead one lap from the finish and kicked with 250 meters to
go, finishing in 13 minutes, 48.62 seconds -- 0.83 seconds ahead of
Kenya's Edwin Cheruiyot Soi.

Tatyana Lebedeva became the only double-winner of the two-day
event, adding the triple jump to her long jump title from Saturday.
Lebedeva won with a mediocre 48-7½, but it was good enough to beat
Chrisopiyi Devetsi by 9½ inches.

"I wanted to jump farther, but I just could not find the
adrenaline," Lebedeva said.

The best duel of the weekend ended in a draw Sunday. After world
champion Tirunesh Dibaba beat Meseret Defar by 0.01 seconds in
Saturday's 5,000, it was payback time in the 3,000.

Again, the Ethiopians were neck-and-neck over the last lap, but
this time Olympic 5,000 champion Defar had the freshest legs,
winning in 8:34.22 to beat Dibaba by 0.52 seconds.

In the concluding 100, Jamaica's Sherone Simpson kept a
near-perfect season going with a win in 10.89, edging Torri
Edwards, Allyson Felix and Me'Lisa Barber.

In the 400 hurdles, European champion Periklis Iakovakis of
Greece surged past Bernshawn Jackson on the finishing straight to
finish in 47.92 seconds. Jackson faded fast and L.J. Van Zyl of
South Africa beat him at the line in 48.08, with the American .16
seconds behind.

Panama's Irving Saladino won the long jump with a leap of 27-7¼,
holding an edge of just 2¾ inches over Saudi Arabia's Mohamed
Salman Al Khuwalidi. Louis Tsatoumas of Greece was third with a
jump of 27-2½.

World champion Zulia Calatayud won the 800 in a tight finish
with Janeth Jepkosgei, the season's top performer so far. The Cuban
crossed in 1:59.02, holding off the Kenyan by .08.