NEW DELHI, India -- An Indian runner who won a silver medal
in the women's 800 meters at the Asian Games failed a gender test
and was stripped of the medal. 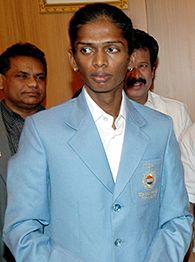 The test reports sent to the Indian Olympic Association on
Sunday said Soudarajan "does not possess the sexual
characteristics of a woman," The Times of India reported. The test
was administered by a medical commission set up by the games'
organizers.

The Indian Olympic Association said Monday it has been told by
the Olympic Council of Asia that the 25-year-old runner was
disqualified.

"IOA has asked the Athletic Federation of India to return the
medal as desired by the Olympic Council of Asia," the Indian
Olympic group said.

The IOA also asked its medical commission to inquire into
Sounderajan's case and report within 10 days.

There are no compulsory gender tests during events sanctioned by
track and field's international ruling body, but athletes may be
asked to take a gender test. The medical evaluation panel usually
includes a gynecologist, endocrinologist, psychologist and internal
medicine specialist.

An Indian athletics official who spoke to The Associated Press
on condition of anonymity because he was not authorized to speak to
the media said Sounderajan almost certainly never had sex-change
surgery.

Instead, the official said Sounderajan appeared to have
"abnormal chromosomes." The official also said the test revealed
more Y chromosomes than allowed.