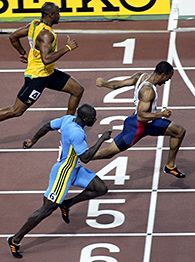 In a 100-meters final that delivered all it promised Sunday, Gay
was slower out of the blocks. Once his legs got pumping, he caught
and surged past Asafa Powell to claim his first gold medal at a
major international championship in 9.85 seconds.

"After 60 meters I saw that I could catch him -- and it
worked," the former Arkansas Razorback said. "I stayed relaxed and
believed in my top speed even though I had a bad start."

Powell, sensing defeat, was passed by Derrick Atkins of the Bahamas at the tape in 9.91. Powell was third in 9.96, and even though he is co-holder of the world record at 9.77, admitted he ran scared.

Gay, unbeaten this year coming into the championships, felt his
composure beginning to slip Sunday morning. "I was wondering,
'Will people still respect me if I lose?"' he said. "I was
wondering if anyone would still love me."

A call from his coach, Lance Brauman, who is nearing the end of
a prison sentence for embezzlement, theft and mail fraud, calmed
his nerves.

"This morning he called me around 11. He told me basically that
he knows in the morning when he gets up that I'll be world
champion," Gay said.

"She talked to me and made me a believer. That's something I
wasn't doing," he said.

Watched under a full moon by Japanese Emperor Akihito, Empress
Michiko and some 40,000 fans at the Nagai stadium, Gay pumped his
arms, beat his chest and shouted in delight in the victory that
ended weeks of nervous preparations.