CHICAGO -- A Michigan police officer died and dozens of
others needed medical care while running the Chicago Marathon as
record heat and smothering humidity forced race organizers to shut
down the course midway through the event. 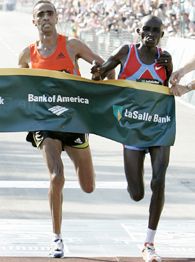 Chad Schieber, 35, collapsed Sunday while running on the city's
South Side and was pronounced dead shortly before 1 p.m. at a
hospital, according to the Cook County Medical Examiner's office.

An autopsy on the Midland, Mich., man was scheduled for Monday.

"Obviously very sad news, and our thoughts and prayers are with
the individual's family," said Shawn Platt, senior vice president
of LaSalle Bank, the marathon's sponsor.

Schieber was a 12-year police veteran in Midland, a city of
about 42,000 in central Lower Michigan. He worked as a field
training officer and community relations officer and implemented
the department's child DNA identification program, the Midland
Daily News reported.

At least 49 people were taken to hospitals, while another 250
were treated onsite, many for heat-related ailments. Chicago Fire
Department officials said they used 30 ambulances from area
suburbs. Three people were in critical condition at Northwestern
Memorial Hospital late Sunday, according to spokeswoman Jennifer
Monasteri.

Also on Sunday, an unidentified runner died during the Army
Ten-Miler race in Arlington, Va., near the finish line at the
Pentagon. The runner collapsed about about 200 yards from the
finish line. Medics responded immediately and took the runner to
George Washington University Hospital. The cause of death was not
known.