SAITAMA, Japan -- One semifinal winner danced in a circle at
midcourt. The other carried off their best player.

Spain beat Argentina 75-74 on Friday night to guarantee itself
its first medal ever in a FIBA world championships. The win came
about three hours after Greece upset the United States 101-95. 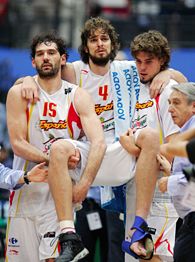 The all-European final, however, will apparently go on without
Spain star center Pau Gasol, who injured his left foot in the
game's final minute and had to be carried off the court after the
game.

"We are extremely happy but it is not full happiness, there is
bad news about Pau Gasol," Spain coach Pepu Hernandez said. "He
has a serious injury and therefore our happiness is not complete.
We want to come out on Sunday and get the win for him.

"I am not sure what the injury is. He hurt his foot and it may
be the same injury he had in the season."

Gasol, who plays for the Memphis Grizzlies, was slowed at the
end of the regular season with a sore left foot, but did return for
the playoffs. Hernandez said Gasol would have tests on Saturday,
but he didn't sound very optimistic.

"There is a large difference in us without Pau Gasol," he said
of the 7-footer who averaged 21.3 points and 9.4 rebounds in the
tournament. "We have to keep going and keep our confidence. We
have to try the same things we did to get here only with 11 players
and maybe that will be enough."

Gasol, who had 19 points and 11 rebounds, was carried off the
court by two teammates with his foot wrapped in tape with ice. They
placed him in a wheelchair to be taken to the locker room.

Jose Calderon made one free throw with 18 seconds left and Spain
(8-0) held on for the victory over Argentina and will face Greece
for the gold medal on Sunday night.

Greece (8-0) beat the United States 101-95 in the other
semifinal, meaning a team from Europe will win the world
championship for the third straight time. Yugoslavia won it all in
1998 and 2002.

"Greece has shown they are a fantastic team, they are the
current European champions so it will be difficult," Spain guard
Sergio Rodriguez said. "What is most important for us is that we
don't lose our composure and believe in ourselves."

Calderon, who plays for the Toronto Raptors, missed the first
and made the second. Argentina came down court and Andres Nocioni,
who plays for the Chicago Bulls, got off a 3-point attempt from the
left corner with three seconds left. It bounced off the rim and
while players from both scrambled for it above the 3-point line,
the buzzer went off.

"I decided to foul Calderon because he didn't play a lot of
minutes tonight and maybe he would go to the line without big
confidence," Argentina coach Sergio Hernandez said.

The win was the 17th straight for Spain this summer, including
two over Argentina in exhibition games leading to this tournament.
Spain now holds a 17-2 advantage over Argentina, including the last
seven in a row.

Argentina won the silver in the 2002 worlds and followed it with
the gold medal in the Athens Olympics. To get a bronze medal, the
South Americans must beat the United States (7-1) in the
third-place game on Saturday.

"We had a very tough game. We were so close to making it to the
finals so it's going to be really hard for our heads to be ready to
face a great team like the USA," said Argentina guard Manu Ginobili, who plays for the San Antonio Spurs. He had 21 points on
6-for-21 shooting, including 4-for-9 from 3-point range. "Forget
about what happened today, come tomorrow ready to get that bronze
medal."

The game was close as expected -- neither team led by more than
five points over the final 6½ minutes -- and physical. Calderon and
Argentina's Pepe Sanchez got into a pushing match with 7½ minutes
left in the third quarter and there were 51 fouls called in the
40-minute game.

Jorge Garbajosa, who signed with Toronto this summer, had 19
points for Spain, which was 25-for-33 from the free throw line.