Phil Kessel has hat trick as U.S. sails to quarterfinals

SOCHI, Russia -- Phil Kessel is the first American in more than a decade to score a hat trick in an Olympic hockey tournament.

He's more interested in something no American has accomplished on Olympic ice since 1980 -- winning a gold medal.

Kessel scored two of his three goals within the opening five minutes to lead the U.S. to a 5-1 win against Slovenia on Sunday. The U.S. is undefeated through three games and if it can win three more, the nation will celebrate its first Olympic championship in hockey since the "Miracle on Ice" at the Lake Placid Games.

On the heels of Phil Kessel's hat trick, the U.S. is sizzling heading into the elimination round, writes Scott Burnside. Story

"It's about the wins, right?" Kessel asked, rhetorically. "We just want to win games."

No member of Team USA was alive when the U.S. beat the Soviet Union in 1980 in one of the biggest upsets in sports history. But if they end up with gold around their neck on Sunday, this title won't be regarded as a miracle.

Kessel and his teammates earned an automatic spot in the quarterfinals of the 12-team tournament by routing Slovenia and Slovakia, and outlasting Russia in a shootout, to finish atop their group. They've scored 15 and allowed only four goals so far.

Kessel scored 1:04 after the puck dropped, removing any thought the Americans would have a hangover after their much hyped victory against the host Russians on Saturday.

"I was certainly concerned after the emotional game," said coach Dan Bylsma. "We were fortunate that we got right out of the gate with a couple great plays."

Kessel's third goal midway through the second period made him the first U.S. player to score a hat trick at the Olympics since John LeClair did it on Feb. 15, 2002, against Finland.

"I was saying right before the game, I hope somebody does something pretty cool, so that some of the focus gets off of me and onto someone else," said T.J. Oshie, who scored on four of six attempts in an eight-round shootout against Russia. "He didn't need six shots in the shootout to do it. He did it in regular time."

"Yeah, I definitely had some nerves," Miller said. "It was an important game to ensure that we're at the top of our pool."

With plenty of support at the other end of the rink, the 2010 silver medal winner didn't need to worry.

"They were stronger on the puck," Slovenia coach Matjaz Kopitar said. "They're strong. They're fast." 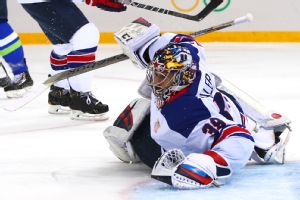 Ryan Miller, in his first start of the Games, had 17 saves as the U.S. beat Slovenia.

Ryan McDonagh scored about a minute after Kessel's third goal to put the Americans up 4-0. David Backes gave them a five-goal cushion early in the third.

Kessel is the first American to score four goals in the three-game preliminary round of the Olympic tournament since Bill Cleary and Roger Christian in 1960. Fittingly, the native of Madison, Wis., and his teammates were sporting throwback jerseys in the style Cleary and Christian wore at the games in Squaw Valley -- "USA" from right shoulder to left hip.

"We've got grit and determination throughout the lineup, but that's the type of speed and skill we need," Bylsma said.

The U.S. also has two goalies, Quick and Miller, who are potentially great, and a good one in Jimmy Howard. Who will be in net for the quarterfinals, when it's win-or-go-home?

"I'm not going to tell you that now," Bylsma said after Sunday's game.

Will No. 2-seeded Team USA men's hockey take the top prize in Sochi? Who will grab silver and bronze? Vote! »

Luka Gracnar made 23 saves for Slovenia, who play in the qualification-playoff round Tuesday after beating Slovakia and losing to the U.S. and Russia.

Even if Slovenia doesn't win another game, it has been a successful appearance for a country that earned a surprising spot in the Olympic hockey tournament for the first time.

Slovenia has just one NHL player, Anze Kopitar of the Los Angeles Kings, and he didn't play in the third period of Sunday's game because flu-like symptoms, according to his father and coach.

"He don't feel good, because he has something with the stomach," Matjaz Kopitar said. "He didn't feel well. He was without the power. Hopefully, he's going to be better."

Slovenia was also without another key player, forward Sabahudin Kovacevic, who was suspended for one game for swinging his left elbow and landing it on the head of Slovakia's Tomas Kopecky.