SOCHI, Russia -- Alexander Radulov pumped both fists and let loose a jubilant scream, and a hockey nation exhaled for a day.

Although the Russians are undeniably laboring through their home Olympics, a few timely goals and two brilliant goalies are keeping them alive in their hunt for gold.

Radulov had two goals and an assist, and Russia survived its first elimination game in Sochi with a 4-0 victory Tuesday over Norway in the qualification round.

Sergei Bobrovsky made 22 saves in the second straight shutout victory for the fifth-seeded Russians, who earned a meeting with Finland in the quarterfinals Wednesday. 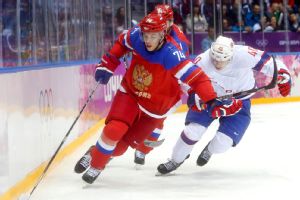 "It is do-or-die games right now," said Alex Ovechkin, who hasn't scored in three games. "We don't have much time to prepare ... but I'm pretty sure everybody on Finland is going to be ready, and we're going to be ready as well."

Ilya Kovalchuk and Alexei Tereshchenko also scored, but the Russians knew they barely survived another tense afternoon at the Bolshoy Ice Dome. Russia was clinging to a 2-0 lead before doubling it in the final 1:07.

After failing to earn a bye to the quarterfinals, Russia must win four games in six days to claim its first hockey gold medal in 22 years. The Russians were forced into two shootouts in the preliminary round, losing to T.J. Oshie and the U.S. before squeaking out a 1-0 win over Slovakia.

The powerful Russian lineup struggled early against winless Norway, but Radulov's soft backhand beat Lars Haugen early in the second period. The crowd gave a cathartic roar as Russia's scoreless streak ended at more than 101 minutes -- an astonishing number for a team with Ovechkin, Evgeni Malkin and Pavel Datsyuk in its lineup.

The much-criticized Radulov came through where his NHL teammates couldn't, and Kovalchuk also scored late in the second period when a rebound kicked off the back of Haugen's leg.

"We scored a couple lucky goals," Ovechkin acknowledged. "Everybody knows we have such a good, talented team on offense. We just try to keep our energy and keep our emotion. It's working, and [on Wednesday] we're going to have emotions and strength for the quarterfinals."

Haugen stopped 27 shots for Norway, which has never beaten Russia in a major tournament.

Russia's strength in Sochi has been its goaltending, and coach Zinetula Bilyaletdinov continued to rotate his netminders after Semyon Varlamov shut out Slovakia two days ago. Bobrovsky played well in the Russians' loss to the U.S. but yielded four goals to Oshie in the shootout.

Bilyaletdinov wouldn't say who will start against Finland. But with Bobrovsky's blanking of Norway, Russia hasn't allowed a goal in 140 minutes, 33 seconds.

"Maybe Russia goes on a roll now," Norwegian captain Ole-Kristian Tollefsen said. "After beating us and scoring a few goals, they'll have a good feeling."

Norway hasn't won an Olympic hockey match since its home Lillehammer Games in 1994, and the team finished last in group play in Sochi with three losses of declining quality. The Norwegians also faced Russia without Mats Zuccarello, their only NHL player. The New York Rangers forward watched from a suite with a bandage visible on his left hand.

But this imperfect, top-heavy Russian team faces incalculable pressure in Sochi, with everyone from President Vladimir Putin on down eagerly anticipating a medal run in the nation's first home Winter Olympics.

Although Norway was unexpectedly tough, Finland presents a formidable challenge with its veteran-laden roster and strong defensive play.

"To be honest, to beat Canada, to beat Sweden, Finland, they need to be more compact as a defensive unit," said Norway's Patrick Thoresen, Radulov's former Kontinental Hockey League teammate. "If they can come together defensively, I have confidence that they can go all the way. Until I see that, I'm not so sure."

After Bobrovsky was forced to make several tough saves in a scoreless first period, Radulov got the Russians' first goal since the third period of their loss to the Americans. The former Nashville forward circled the net and flung a backhand at the feet of Haugen, who probably should have stopped it.

Late in the period, Radulov drove the net again and put a shot off the post. Kovalchuk swatted home the rebound off the back of Haugen's leg.

"He was playing dynamically," Bilyaletdinov said of Radulov, who received pointed criticism from his coach earlier in the tournament. "Efficiently, more important. I can't say anything negative about him."