SOCHI, Russia -- Teemu Selanne led his team around the ice, with a bronze medal draped around his neck, after he finished off his sixth Olympics with a sweet victory.

If the Finnish Flash is retiring and hanging up his skates after the NHL season, he picked a pretty good way to go out on the world's stage.

The Americans' collapse means they will return home without a medal, a sting that will be felt for a long time, writes Scott Burnside. Story

The final game at the Olympics turned out well for Finland's Teemu Selanne, who will go out on a high note, writes Pierre LeBrun. Story

Selanne scored two goals and Tuukka Rask had a 27-save shutout, helping Finland rout the United States 5-0 Saturday to win hockey bronze at the Sochi Games.

Selanne and his teammates were not finished, scoring three goals in the third against a team that looked like it would rather be at home.

"It was just something special," Selanne said. "I'm so proud."

The Americans, meanwhile, were humiliated.

Selanne has helped Finland win four medals in the last five Olympics, more than any other nation in the NHL era.

Before the match became a rout, it was a game of missed opportunities for the Americans.

Patrick Kane couldn't convert on a penalty shot in each of the first two periods. He missed the net to the right on his first one-on-one duel and hit the right crossbar on his second.

"Just didn't really capitalize on anything," he acknowledged.

Kane, who also missed a breakaway in overtime against Russia, said Saturday's setback was one of the most frustrating games of his career.

"Whether it was confidence or not getting enough chances, who really knows at the end of the day," he said. "I thought I had opportunities. ... You think you're in three times against the goaltender alone and hopefully you could score a couple of times out of that. It just wasn't meant to be." 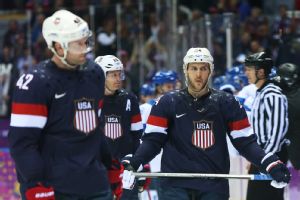 The U.S. dominated in the preliminaries but couldn't get it going during the medal rounds. The Americans finished a disappointing fourth.

The Americans wasted a chance to earn medals in consecutive Olympic hockey tournaments for the first time since winning gold in 1960 and silver in 1956.

Finland, meanwhile, took advantage of two power plays in the third period with goals to put the U.S. away in a game it didn't look interested in after falling behind 2-0.

If the league and players' union do not let the world's best players go to South Korea in four years, Kane and Co. may never get a shot to help the Americans win gold that has been elusive since the 1980 "Miracle on Ice."

Jonathan Quick, starting ahead of silver-medal winning goaltender Ryan Miller, stopped all eight shots that got to him in the first before giving up five goals on just 21 shots over the last two periods.

"Absolutely not second-guessing the decision to go with Quick in net," U.S. coach Dan Bylsma said. "He was our best player in the semifinal game.

"He was excellent again tonight. He made five, six or seven excellent saves in the first half of this game. And no, I did not consider pulling him as the game went to four and five."

Selanne, who has said he will retire after playing for the Anaheim Ducks this season, skated off the ice in Sochi for the final time with 20 seconds to play and hugged two teammates on the bench before leaping back over the boards at the final buzzer.

From the ice, Selanne reached over the boards to embrace every assistant coach and executive on Finland's bench. The popular player got lifted off his skates more than once by hugs.

"Maybe this was his last game for national team and as a captain," Finland coach Erkka Westerlund. "It was excellent game to finish."

Finland won bronze for the second straight Olympics and third time since 1998, the first with NHL players. It lost to rival Sweden in the 2006 gold-medal game and in Friday's semifinals.

The Finns were fired up for the consolation prize and weren't satisfied with a two-goal lead after two periods, pouring it on with Juuso Hietanen's goal 6:10 into the third -- as a penalty on Kane was expiring -- and Selanne scored for a second time less than two minutes later.

Selanne, the oldest player in the tournament, extended his Olympic record to 43 points with another fantastic game.

The U.S. seemed set up to end its Olympic hockey championship drought, or at least come home with a medal, with a group of talented players in their prime.

It started well, routing Slovakia, outlasting the host Russians in an eight-round shootout and cruising past Slovenia and the Czech Republic by a combined score of 20-6.

The Americans were humbled by defending champion Canada, which also beat them in the gold-medal game in 2010, with a 1-0 win that was more lopsided than the score indicated.

Then, they got schooled by Finland, a team that wanted to win more than they did.