SOCHI, Russia -- Sidney Crosby skated in alone on Henrik Lundqvist, faking Sweden's goalie to the ice with a textbook-quality deke and sliding a perfect backhand into the net.

Canada did everything by the book at the Sochi Olympics, winning all six games with a ferocious commitment to defense and discipline. When Canada's captain finally got his first goal of the Games Sunday, it had none of the dramatics of Crosby's last Olympic goal four years ago in Vancouver.

Winning in Salt Lake ended a half-century slump. Winning in Vancouver was the party of a lifetime. But winning in Russia finally killed the perception that Canada couldn't win on big ice, writes Pierre LeBrun. Story

But it was every bit as golden.

Jonathan Toews scored in the first period, Carey Price made 24 saves in his second consecutive shutout, and Canada defended its Olympic men's hockey title with a 3-0 victory over Sweden.

"We're just an amazing team to watch, the way we work together," Toews said. "We were just all over them. It's fun to be a part of."

Chris Kunitz also scored as the Canadians confirmed their worldwide dominance in their national game by winning the gold for the third time in the last four Olympics. No team in the NHL era has controlled a tournament like this group, which allowed just three goals in six games and never trailed at any point in the 12-day tournament on the shores of the Black Sea.

"Not quite as dramatic as the other one," Crosby said. "Just real solid all the way through. We knew the way we wanted to play, and the last couple of games, we were solid. With each game, we seemed to build more and more confidence."

By the final event of the Sochi Olympics, that confidence was unshakable. Canada became the only repeat Olympic champ in the NHL era and the first team to go unbeaten through the Olympic tournament since the Soviet Union in Sarajevo in 1984.

The Canadians didn't allow a goal in their final 164-plus minutes at the Bolshoy Ice Dome after the first period of the quarterfinals against Latvia, shutting out the U.S. and Sweden.

Steve Yzerman, the architect of this roster for Hockey Canada, called it the greatest display of defensive hockey by any Canadian national team. Yzerman also said he's stepping down as Canada's Olympic executive director.

The Swedes also were unbeaten until the final, but they couldn't compete with Canada's formidable defense and Price, a first-time gold medalist who played splendidly in Sochi, allowing three goals in five games.

"That was the hardest-working team I've ever seen," Price said. "I really can't say enough about that group of defensemen and that overall team in front of me. Our work ethic was what won us this championship." 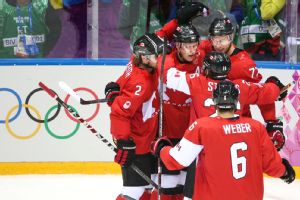 Canada defended their gold medal with a dominating win over Sweden.

The Canadians exchanged hugs and leaped over the boards at the final horn, gathering at Price's net for a celebration that had seemed inevitable since Crosby scored in the second period.

Toews, who scored on a first-period tip-in, and Crosby are among Canada's 11 returning players from the 2010 championship team. Kunitz, widely criticized for failing to finish chances earlier in Sochi, capped the scoring with a vicious wrist shot in the third.

If these games were the last with NHL players joining their national teams, Canada's pros put on a landmark show. The NHL won't decide for several months whether to allow its players to go to Pyeongchang.

"It is amazing to see the guys that have the raw talent and ability commit themselves to doing all the little things right," said Toews, who has two Stanley Cup titles and two Olympic gold medals at 25. "We knew that's what it was going to take in this tournament to win the championship, and guys were willing to do that."

While Canada got goals from its two best centers, Sweden had to play without its top three centers. With Henrik Sedin and Henrik Zetterberg already out for the tournament, Nicklas Backstrom was scratched shortly before game time. Swedish Olympic officials said Backstrom had a positive drug test because of an allergy medicine.

"With all the turnovers, Hank could only do so much for us," Sweden captain Niklas Kronwall said. "We thought that if we played a perfect game, we'd have a chance. ... It doesn't feel great. I didn't feel like we gave ourselves an honest chance."

After both teams hit a post in the opening minutes to put a little buzz into the quiet Russian crowd, Canada went ahead nearly 13 minutes in when Jeff Carter threw a quick pass in front to Toews, who deflected it underneath Lundqvist for his first goal in Sochi. Toews also scored Canada's first goal in the gold-medal game in Vancouver.

Late in the second period, Crosby scored after forcing a turnover at the Canada blue line. Loui Eriksson couldn't catch him, and Lundqvist couldn't stop the backhand with his sprawled toe.

When Backstrom was ruled out shortly before game time, Sweden was left without its top three pivots. Jimmie Ericsson attempted to fill in between Daniel Sedin and Eriksson, but he's not a natural center, and he lost all six of his faceoffs in the first period.

"They had a good game plan against us, and they stuck to it," Sweden defenseman Erik Karlsson said. "We couldn't really break through a brick wall."