What's it like to wait a lifetime for an Olympic moment and then fall in front of millions? 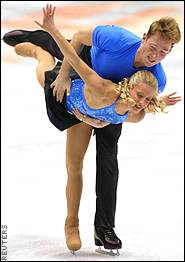 American Tiffany Scott took the ice beaming Saturday night. Dressed in a blue sequined top and a black miniskirt, she strode to her starting position, looked into the eyes of pairs partner Philip Dulebohn and smiled so widely that her face broke into a giggle.

Scott dipped a sultry shoulder. She swiped playfully at Dulebohn. The crowd at the Ice Center buzzed. The music built: Heartbreak Hotel.

Scott and Dulebohn oozed chemistry. That happens when you spend years waiting tables, picking up stray dumbbells at a gym in your Delaware hometown and teaching kids to skate -- all to pay the hefty tab your dreams run up. Scott showed up for work at the diner one day only to find it had shut down. She never got her last paycheck. For a time, Dulebohn worked seven days a week -- four days at the Melting Pot and three at the rink.

Those were the good times.

The bad times came last year, when Dulebohn fractured his hip and could do no manner of work or play for four months. He would come to the rink and watch his partner skate by herself. He could only cheer and wonder.

"It was a very, very difficult summer," Dulebohn said. "I didn't know if I would skate at all this year."

Even when he returned to the ice, his sense of timing lagged badly. She was an Olympian-in-waiting. He was back on training wheels. Scott and Dulebohn had three weeks until the U.S. nationals.

And then, somehow, they silvered. It was by no means perfect, but it was enough. They made it.

The pair opened their short program Saturday night with a side-by-side triple toe-loop. Scott loves this jump. In practice just the other day, she nailed it perfectly. Scott gathered herself in with her arms and spun -- but too tight. Scott rotated into a tilt. And she knew. They both knew. She could not land it.

Scott got up quickly from the fall, but the brilliance of her smile had waned. Another playful slap at her partner came without conviction. Her concentration had ebbed. Next: the triple salchow. Another lift, another throw and this time Scott did not overrotate. She held her spin perfectly and reached back with her skate for the ice behind her. But her edge caught, and she fell again. The crowd allowed a soft groan.

The rest of the program, Mrs. Lincoln, went smoothly. The music stopped. The couple sighed. Dulebohn kept his posture. Scott forced a smile -- as good waitresses will do.

But judges don't tip. What little wind remained in Scott and Dulebohn got sucked out by a seemingly endless row of 4.4s and 4.5s. With glistening but dry eyes, the pair met the press.

"I thought I landed it," Scott offered in a clear voice. "My arms were too far back."

"It was a flukey mistake," Dulebohn said, back arched. "Things happen."

"I want to go do it again right now," she said.

"We want to fight all the way to the end of the long program," he said.

Scott and Dulebohn did not fight off the icy cold realization that their Games were over. That truth could only share space with the warm and still fresh thought that they had just skated in the Olympics.

"We will leave the Games with a good feeling," Dulebohn insisted.

The pair spoke next about the journey -- about all the hours in the restaurant and the rink. "Last year," Dulebohn said, "was much harder than this. So much harder."

So what's it like to wait a lifetime for an Olympic moment and then fall in front of millions?

Not bad. Not bad at all.