SALT LAKE CITY -- Michelle Kwan's lifelong hopes of etching herself into Olympic lore were reduced to the fitful dream of a child. Wrapping herself tightly in a black scarf, Kwan hunched over at the press conference, harkening back to a nightmare she had years ago as a kid. 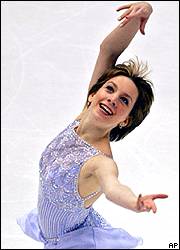 "I was sleeping before a competition in Las Vegas and I was talking in my sleep 'It's OK, It's OK,'" Kwan recalled, her eyes shrunken with tears. She had been dreaming about skating and being nervous before the event. "Today, that's what I have to remind myself, It's OK, It's OK."

The gold medal was Kwan's to lose, and despite all her experience and all the changes she made, firing her coach and choreographer and striking out on her own, she faded on the most important night of her life. Her performance had the feel of Katarina Witt's last Olympic free skate: too slow, too old, too conservative.

The plastic gold medal, given to Kwan by Dorothy Hamill, shone brighter than the bronze weighing heavily on her chest. Kwan was clearly touched by the gesture, wearing the toy proudly around her neck. But somehow it seemed to make her much younger.

So perhaps it was appropriate a kid trumped Kwan yet again. This time, Sarah, not Tara, served up an exuberant program for the judges. In fourth place after Tuesday night, Sarah Hughes had never even considered winning a medal, let alone the gold. Unfettered by expectations, Hughes did not hold back and skated joyously with no hesitation between the jumps in her combos.

While Hughes skated, her coach Robin Wagner leapt around covering her mouth, patting her chest, holding her stomach, trying to breathe. Wagner beat her fists in the air to the rhythm of the music, an agitated conductor in the wings. All of Hughes' anxiety seemed to be resting on her.

Hughes, finished, stunned. The performance was good enough to win a medal. Catching her coach's eye, Hughes shrugged in surprise. Turned out, it was indeed the shrug of a champion.

"Yes! Yes!" Wagner yelled, scampering across the rink-side carpet to hug everyone in sight.

In the "kiss and cry" area, teacher and student giggled like a couple of schoolgirls passing notes. The marks went up and both their mouths dropped. They then retreated to their green room.

As American Sasha Cohen began her final spins, Kwan went into her twitchy pre-ice routine, her arms snapping apart and together like a clothespin. She clapped briefly for Cohen, and then raced out onto the rink, deftly navigating through the toys and bouquets. The flower girls were gawking at Cohen, but Kwan snapped them back into duty, motioning for them to hurry up and gather all the goodies still littering the oval.

Kwan's impatience carried over into her program. She rushed into a triple toe early in her routine and two-footed the landing. Shaken, she later fell on her triple flip. Photographers bolted out of their seats angling for a shot of Michelle sitting on the ice. After she struck her final pose, she also shrugged, but it was only to stave off the tears that would come later.

As she made her way over to the "kiss and cry," Kwan covered her head to avoid getting pelted by a stuffed animal from the crowd who had cheered her on after her fatal error. Kwan punched the seat softly with her right hand, knowing she had failed in her mission. While her good friend Alexei Yagudin took the pressure and belted everyone else with it days before, Kwan was hobbled by it.

Sequestered, Hughes and Wagner hadn't been watching the scores or routines, and they had no idea that the gold was theirs. But later, when Irina Slutskaya's presentation marks went up putting her in second, Hughes and Wagner shrieked in each other's faces.

The night was, of course, not without controversy. If the Russian Federation was trying to set up Slutskaya in good stead with the judges by threatening to withdraw from the Games, it didn't work.

"Everywhere else, my second marks are higher, 5.8s and 5.9s," Slutskaya said. "But here it's funny. As if I'm not artistic. But that is sport. I'm obviously not the only Russian who has suffered here."

Kwan's red-rimmed eyes made it clear the Russians weren't the only ones suffering. For Kwan, gold was just a dream. For Hughes, the dream was reality.