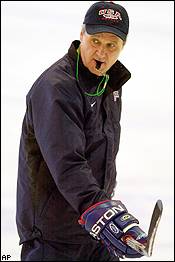 The good old days earlier this week -- when Sergei Fedorov playfully sprayed Red Wings teammate Chris Chelios with a water bottle and then referred to Team USA coach Herb Brooks as "Herbie" -- are long gone. The Russians are fuming, and the Americans better be ready for some nastiness in Friday's medal-round semifinal at the E Center.

Don't assume that Russia's threat to load up the Aeroflot and pull out of these Games has everything to do with skiing and nothing to do with hockey. Russian coach Slava Fetisov and his once-merry band of snipers were not happy with the officiating in yesterday's 1-0 quarterfinal victory against the Czechs. The officials handed out 14 minutes in penalties to the Russians and only 6 to the Czechs. Then there was that two-man advantage -- a relative rarity in international competition.

Russian Olympic committee president Leonid Tyagachev was at that game, and Thursday he had some fighting words for the IOC and the NHL. Tyagachev suggested that judging in all Olympic sports has been politically motivated.

"A lot of money is riding on these Games," he said. "If our team is losing, the prestige of the other team is going up. Where there is a lot of money, politics is involved."

Translation: the NHL does a lot better financially if the Canadians or Americans win the gold than if any other team steps to the top of the podium. And guess who the Russians have to beat to win gold? Team USA and, most likely, Team Canada.

What about that 24-hour deadline for IOC President Jacques Rogge to redress the Russians' stated grievances about the disqualification of cross-country skier Larissa Lazutina? Don't expect Team Russia to up and skate off the ice in the middle of Friday's game. Still, if the Russians receive far more penalty minutes than Team USA and end up losing the semifinal, don't be shocked if Team Russia packs its bags and concedes the bronze medal to -- gasp -- Belarus.

Brooks should also know that unlike the robotic Red Army teams of the Soviet era, these Russians put in effort according to the stakes of the game. Fetisov's men looked downright lazy on Monday, standing around and watching Finland break in on countless two-on-ones and end-to-end rushes. Russian goalie Nikolai Khabibulin used every piece of equipment he had to hold the Finns to only three goals, but what he really needed was a cigarette and a blindfold.

Immediately afterward, Fetisov pulled his entire squad away from the press area and into the locker room for a team meeting. Two days later, the Russians were diving in front of shots and clearing away rebounds to advance to the medal round with a 1-0 win. Khabibulin swatted away 41.

What was the difference? Well, the Russians simply care more about beating the Czechs in the medal round than beating the Finns in a seeding match.

"The games between Russia and Czechs are big for us," Khabibulin said afterward, "and this game meant lots more than the previous three."

And Friday's semifinal rematch of 22 years ago means more -- much more -- to the Russians than even defeating the Czechs, notwithstanding Thursday's bureaucratic mudslinging. The Russians have not won a major international championship in hockey since 1993. Fetisov, though adored in the States, has doubters back home. And 1980 stings as much in Moscow as 1940 once did in Manhattan. If the years of answering all those questions from angry countrymen about the embarrassment in Lake Placid wasn't enough to raise Fetisov's ire, the sight of Mike Eruzione and company lighting the cauldron at the Opening Ceremonies sure was.

When asked about the rivalry after Monday night's tilt, Fetisov droned, "You mean 1980? I don't remember. Too many concussions."

Be assured: Fetisov remembers. Vividly. And "Herbie" and his team can expect the Russians to be the ones banging heads from the opening face-off Friday.