WEST VALLEY CITY, Utah -- Not to overstate the importance of Sunday's gold-medal hockey game for Canada, but I think I saw Prime Minister Jean Chretien in the stands wearing a rainbow wig and holding a sign that read "John 3:16." 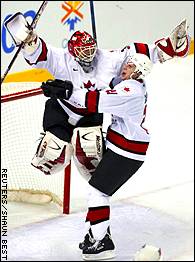 Half a century without a Canadian hockey gold medal? That's like going 50 years without a skater shedding a tear in the Kiss and Cry Zone.

Of course, there was a Canadian dollar worth quite a bit Sunday. After the victory, Wayne Gretzky pulled out a loonie and said the Canadian icekeeper had buried it into the rink before the tournament started.

"We got two gold medals out of it, so this is pretty special," Gretzky said, referring to the women's gold as well. "I hope this doesn't get him fired."

Canada played with the pressure of the drought the way the Red Sox play with the ghosts of failures past. It's like having someone else on the ice with you, but it's not exactly the power play you covet.

"With the 50-year drought," Canada coach Pat Quinn said, "and the longer we're away from (the last gold medal), the more it becomes an albatross than anything else."

"I know what it's like to skate with a piano on my back," defenseman Al MacInnis said.

This was the second Olympic tournament with NHL players and the first did not work out so well for Canada when it lost the bronze-medal game. That placed even more pressure on the Canadians, who brought in Gretzky to turn things around as the team's general manager. Surely, with the Great One running the show, Canada would finally win the gold again.

And then the tournament began and Canada lost its first game to Sweden 5-2.

That, followed by a narrow 3-2 victory over Germany and a 3-3 tie with the Czechs created panicked headlines and more pressure, prompting Gretzky to deliver a few controversial statements about "American propaganda" and how no one likes Canada and wants it to lose.

This surprised more than a few people. One, that Gretzky said it. Two, and more importantly, that there are people who don't like Canada.

"I decided I would take some pressure off our guys and I did," Gretzky explained Sunday. "And then I didn't sleep for five days."

Apparently his players were well rested, though. They got better as the Olympics progressed and were on top of their game Sunday. The game was wonderfully played and fiercely competed for the first 50 minutes -- player after player from both teams talked about how good an advertisement it was for the sport in general and the NHL in particular.

But the Canadians took control late in the final period as the Americans tired. Jarome Iginla scored a back-breaking goal with four minutes left and tournament MVP Joe Sakic scored the clincher with 1:20 left when two U.S. defensemen fell.

Seconds later, the outnumbered Canadians fans began singing "O, Canada." The sound was like the song itself, proud, beautiful and stirring.

"O, Canada, we stand on guard for thee," they sang as the clock ran out and the Canadian players on the bench listened with lumps in their throats so large it felt as if they had swallowed pucks.

"From (Sakic's goal) on, our bench was a great place to be," forward Brendan Shanahan said. "We could hear the 'O, Canada' being sung throughout the arena. It's a historic day for Canada and we're all proud to be part of it."

Way to go, eh! Molson's and Roots gear for everyone!

"It's exciting. It's hard to contain your emotions," Steve Yzerman said. "Every guy is trying to be calm and relatively stoic. But you just can't. You become a kid again."

Former Canadian Prime Minister Pierre Trudeau once said Canada's main exports are hockey players and cold fronts and its main imports are baseball players and acid rain. That's never been so true as in the past decade when the country saw so many NHL teams move to the United States that you could smell the exhaust from the U-Haul vans parked along the border.

So, it was no wonder that when the country sent its best team against the United States' best for the Olympic gold, it brought the entire country inside to watch on TV and then spill into the streets in celebration. The victory won't raise the value of the Canadian dollar or put SCTV back on the air, but it was a wonderful rallying moment that reminded many of the 1972 Summit Series with the Soviets.

As one fan told an Associated Press reporter in Toronto, "It's not really about hockey. It's about Canada and the United States. We're Americanized, but this is our game. This is the last vestige of what we are."

Jim Caple is a senior writer at ESPN.com.