The XIX Winter Games needed a character, a mascot, someone whose utter improbability could save the world from conspiracy theories and figure skaters with persecution complexes. 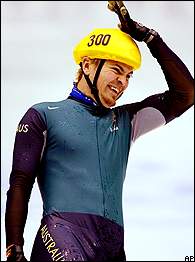 It got Steven Bradbury. Never in our wildest dreams...

He's got hair dyed the approximate color of a low propane flame and an eyebrow ring. His hair sticks up and his eyes bug out and everything about him seems to say, "What am I doing here?"

But the first thing to know about the Australian 1,000-meter short-track gold medalist is that he seemed to have forgotten about the broken neck. He was chronicling the injuries he has endured as a result of his sport, and the broken neck slipped his mind as he talked about the time his thigh was gashed and he lost four liters (out of a grand body total of six) while gaining 111 stitches.

This guy's story started out ridiculous and eventually settled on preposterous. He won his country's first Winter gold by being the slowest man skating but the last man -- the only man -- standing.

If 90 percent of life is just showing up, the other 10 must be just standing up.

His strategy in Saturday night's 1,000 meters was to hang back and wait for Rollerball to break out. This was not only a result of strategy but also necessity. He couldn't have been much closer to the front because that's where all the talent tends to go once the race passes the four- or five-lap mark.

In the final, after confidently holding up the rear the entire race, Bradbury glided across the finish line by himself while the four other racers attempted to either get off the ice or fling themselves across the line. A crash on the final turn, as American silver medalist Apolo Ohno was within spitting distance of the gold, made Bradbury the most sheepish winner, maybe ever.

It's not quite the Jamaican bobsledders winning gold, but it's in the same area code.

"Obviously, I'm not the fastest skater, but those were my tactics and they worked like a charm," Bradbury said. "I thought maybe two would go down and I'd get the bronze. I saw 'em all go down and Oh, my God."

He crossed the line and looked stunned. He looked at the officials, perhaps expecting them to tell him it wasn't true. He skated
something of a victory lap, and when someone in the stands told him he shouldn't look so happy, Bradbury did what any ecstatic winner would do: He flipped the guy off.

"There were some negative comments from an extremely loud fan," Bradbury said.

He might be a little rough, and a little embarrassed about his methodology, but there's a part of Bradbury that believes his gold is poetic justice. Not for the way he skated Saturday night, but for the way he's kept at it all these years.

And for all the times when he thought he should have been standing on the podium and wasn't.

"I don't think I deserve this so much for tonight as for the last decade," he said. "The hard slug I've put in to make it here."

Before we forget, he makes Ohno's boots. Bradbury's company, Revolutionary Boot Company, was looking for a little publicity during these Games, so the Aussie wrote an e-mail to Ohno on Friday that said something like this:

Apolo,
If you win a medal tomorrow night, how about giving RBC a little mention?
Regards,
Steven

Sitting in the winner's press conference, Bradbury said, "I guess he doesn't have to now. I can do it."

An hour after the race, he still seemed to be in a daze. Even allowing for the fact that dazed might be his perpetual state.

Asked what he thought when he crossed the finish line, Bradbury said, "For a split-second I thought, 'My God -- I won … I think.' "

It's a cliché to say he was the happiest guy in the building, but he had company. Everyone with a notebook or a tape recorder was, at the very least, tied for second.