SALT LAKE CITY -- You know why we were expected to care about short track speedskating in the first place? Because the top American is named Apolo. 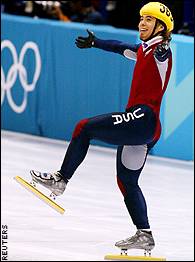 Really, that's the only reason. Short track has been in the Olympics for quite a while, and it normally receives less attention than curling. Even by Winter Olympics standards it is obscure. It is usually the sport (and I use that term charitably) held at the figure skating venue that nobody cares about and nobody covers.

But this time we were supposed to care. Because this time there was an American with a great name, Apolo Anton Ohno, and a soul patch that made him look like the coolest thing this side of Shaggy (the musician, not the Scooby-Doo character). He was on the cover of Sports Illustrated's Olympic preview issue even though the magazine didn't pick him to win a single gold medal (and they were almost right).

Wow, his name is APOLO. Cool! I can't wait until his GameBoy comes out.

So suddenly short track is the hip sport. Suddenly Michele Kwan is sitting in the stands with a fake soul patch under her lip. Suddenly there are more reporters crowded into the mixed zone than in the Sizzler buffet line.

But nobody would care if Ohno's first name was Pete or Steve or Kelly. Don't believe me? Well, there are two U.S. skaters with bland names like Amy (Peterson) and Cathy (Turner) who won seven medals in short track in past Olympics, and I don't remember them ever showing up on SI's cover. Heck, I barely remember Peterson even appearing in her hometown paper.

People whine about figure skating not being a real sport but at least figure skating is upfront about the fact that it relies on biased judges. Short track wants you to believe that it is a pure sport decided only by the clock but that's nonsense.

In his final race at the U.S. trials, he was accused of tanking the race so his friend could make the Olympic team (a charge later dismissed as unfounded by a U.S. Olympic Committee arbiter). In his first race In Salt Lake, there was a three-car pileup on the final turn and the last-place skater won the gold medal while everyone else crawled on the ice for second and third. In his next race, the winning skater was disqualified for cross-tracking, prompting a protest from the Korean delegation, an arbitration case and death threats.

In his next race, the 500 meters Saturday, Ohno was disqualified for impeding another skater. In his final race, the relay, three of the four teams fell down, giving Canada an easy gold.

Dan Jansen falls in the traditional long track and he weeps like a figure skater in the Kiss and Cry zone. Ohno falls in short track and he smiles broadly while shrugging it all off as no big deal. After all, that's just short track

How do I know? Because all the short track skaters keep telling us so.

Oddly, short track skaters don't have much problem with the arbitrary nature of their sport. They're too used to it.

"I'm not disappointed at all. I have a silver and gold," said Ohno after not winning a medal Saturday. "It would have been nice to pick up another one, sure, but with short track being such a crazy sport, you could run the same race twice and have two different winners."

In other words, "That's short track."

Of course, there is a reason "That's short track" is the standard response skaters use after these races. It sounds better than, "Our sport really is ridiculous, isn't it?" or "If I wanted to be in a real sport, I'd be in long track but the people here listen to better music and have better names."

Jim Caple is a senior writer at ESPN.com.