"The further from Torino, the better the Winter Games." Discuss.

That's my Olympic Ph.D. thesis. The streets of Torino are still quiet, though international pop stars Duran Duran did their best Wednesday with a city center concert. 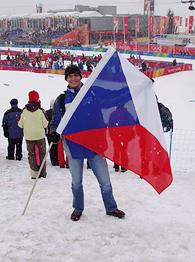 Some 24 hours ago, I curled. Thursday, it was a trip to the women's biathlon 7.5-kilometer sprint at Cesana San Sicario, not to be confused with Sicario San Cesena. It's a great venue in the Alps (or some whopper of a mountain -- geography's not my strong point). At around 5,500 feet altitude, the journey first requires an hour's train ride from Torino to Sauze d'Oulx.

"Where's Sauze d'Oulx?" my friend asked in the tourist information office. "Next to Bardonecchia," was the answer.

From Sauze d'Oulx, it's a free 20-minute coach ride to the venue. Believe me, this is a different experience from my Greyhound bus heading for New York with half of "America's Most Wanted" in the first five rows, including myself. You will always remember any ride that begins with the driver announcing over the loudspeaker he "don't want no trouble, don't want to call law enforcement."

Back to San Sid Cesana, or whatever it's called. Thanks to a magical mix of snow and sunshine, ice and slushy mud are everywhere. That's easily dealt with. I'm no city softy and have watched repeats of "The Waltons" for years.

Biathlon is cross-country skiing and shooting. It started with border guards in Sweden and Norway having a little competition in 1767 and then got really popular nine years later with the Brits and Americans. Under event rules, failure to hit the target means you have to "cover an additional 150-meter circuit for each target missed." Dick Cheney would have to travel around the world if he wanted a go at this one.

Fans at the biathlon Thursday were happy and that's what counts, not my past moaning.

"The transport's great, really works," said Andrew Marks from Manchester, England, here with his parents David and Glenda. Andrew's first Games were "definitely living up to expectations, surpassing them."

Daniel Cech, from the Czech Republic, was also having a good time. Why did he come? "It's near Prague." He skis, but doesn't shoot, a reminder that many spectators are themselves highly skilled athletes, much like myself.

There was also a large contingent of Russian fans and quite a few Union Jacks on display, as well. I asked David why Britain is hopeless at winter sports. "The winters aren't cold enough and they're not snowy enough," he said. Now, if we had a Rainy Olympics, where you have to get the washing in quickly, we'd kill everyone.

And then I met Hollywood star Alec Baldwin. Or someone with his voice. Spencer Allen from Shelburne, Vt., spelled his name for me perfectly, and that's no joke. Some interviewees looked deeply embarrassed on being asked to do this, thinking it's a trick question. Spencer had no problem because he teaches, "Chemistry, literature, philosophy, psychology and business."

Oh, how I wish you could hear this guy's sexy voice on tape. He's got quality gravel in his chuckle box. Can make butter or snow melt.

I asked him if it was hard being an American abroad in controversial times. "Everyone seems to be generally pretty friendly," Spencer said, adding that, "the Latvians were really friendly last night."

We don't want to know, my friend.

In the end, France's Florence Baverel-Robert won the biathlon sprint beating out  whoa, we do want to know about the Latvians, and their 3-3 ice hockey draw against the U.S.! Back to you Spencer.

"Latvians were all over the place and they were drunk and friendly and crazy, but it was fun. So loud!"

For Olympic organizers, the biathlon is "the symbolic re-enactment of a primordial activity: hunting in the snow, the long treks on skis, glimpsing the prey, the coolness of a marksman."

OK, point taken, but how far back will they go? Just because some Stone Age guy tripped and did a double axel on his way back from savaging a dinosaur doesn't mean he invented freestyle figure skating. Does it?

Brian Church is a columnist with the Athens News in Greece. He will be contributing to ESPN.com throughout the Olympics.