TORINO, Italy -- Can we finally stop hearing how "American Idol" beat the Olympics in the ratings?

As if that's proof of anything, anyway. "The Simple Life" got higher ratings than Masterpiece Theater. More people saw "Mr. and Mrs. Smith" than "Before Sunset." "The DaVinci Code" sold more copies than "The Plot Against America." The Dodgers outdrew the White Sox.

If we judge quality and value on the basis of popularity and recognition, we'll have to consider Britney Spears more important than school teachers, "Dogs Playing Poker" higher art than "Nighthawks" and Homer Simpson a better actor than Philip Seymour Hoffman.

Besides, there are two good reasons for lower Olympic ratings this winter that have nothing to do with aggressive counter-programming by Fox and ABC.

1) In the Internet world of instantaneous results, fans lose their enthusiasm for watching a sporting event when they read who won it 12-15 hours before it airs on TV (this won't be a problem in Vancouver in 2010); 2) Fans especially lose interest when they know Bode Miller and other Americans lost the event 12-15 hours before it airs. Despite winning 25 medals, it was a disappointing Olympics for America's marquee names: Michelle Kwan withdrew the first weekend of competition, Miller should have and it's unclear whether either U.S. hockey team ever arrived. All that translated into lower ratings.

But there's no reason to focus on ratings. If you enjoyed the Olympics, why should you possibly care how many other people watched? If more viewers tuned in to "American Idol" on any given night, it only means they missed out on 17 entertaining days of sport (well, except for Yoko Ono's appearance in the Opening Ceremony).

No matter the ratings, here's why the Olympics are better than "American Idol," or any other reality show you ever watched.

"American Idol" gives us Bobby Bennett bellowing "Copacabana." The Olympics had Pavarotti singing Puccini on what was figuratively and (possibily) literally the world's biggest stage (the curtain was a block long). True, the Olympics also had Peter Gabriel singing "Imagine," but that still had more so-bad-it's-entertaining value than William Hung singing "She Bangs."

But if you really wanted an inspiring performance, you just had to watch any of the gold medalists singing along as their national anthem plays and their flag is raised to the top of the pole.

"American Idol" contestants compete for fleeting fame and a recording contract. Rather than showing up at state fairs everywhere, however, speedskater Joey Cheek inspired us by donating his $40,000 in medal bonuses to "Right to Play," the international charity dedicated to providing sports to children in some of the world's poorest, most war-torn nations.

"I've learned how news cycles work," he said. "Tomorrow, there will be another gold medalist. I want to use my time here for something productive."

By the end of the Games, he had raised almost $400,000 with matching donations. Take that, Clay Aiken.

Forget the sniping among the Idol judges or the plotting contestants on "Survivor." We'll take the U.S. men's speedskating team. Watching these guys repeatedly race to gold while wondering which one would be the first voted off Speedskating Island was theater at its best.

Yes, Becky O'Donohue is easy on the eyes (and a former Division I basketball player). But the Olympics gave us Tanith Belbin in her cheek-baring dance costume, Germany's Anne Friesinger and Catherine Raney in their speedskating suits and Italy's new heartthrob, speedskater Enrico Fabris (a dead ringer for Adrian Brody). Fabris is the hero of the Olympics for the host country, but he took it stride. "I got an e-mail from a college classmate," Fabris said, "and he congratulated me on winning and then asked me if he could borrow my notes." 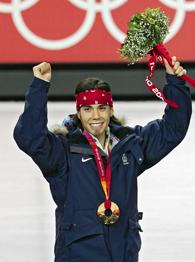 But the most beautiful person of all -- in an "American Idol" sense -- was figure skater Johnny Weir, who wore a single glove he named Camille during his short program, wore a beaver and python coat at a Russian House party and said things like, "I didn't feel my inner peace. I didn't feel my aura. I was black inside."

Raw emotion
Simon Crowell's biting criticisms can never match Italian ice dancer Barbara Fusar Poli for putting a lousy performance in its place. The image that will last for years from these Olympics is the glare Fusar Poli gave Maurizio Margaglio when he dropped her with seconds remaining in their ice dance routine. "It was like, 'Sheeet, we did a mistake," Fusar Poli said of The Glare. "There was no problem between us. I did not know what my eyes were saying."

Sure, it must have been painful for Stevie Scott to get bounced off "Idol." But how long had she been practicing for her chance? Minnesota's Tony Benshoof has been training in the luge for almost two decades. He was 17th at Salt Lake and he finished fourth here, missing a medal by less than two-tenths of a second. "It's amazing to believe," he said, "that I judge my life on such a small time frame."

Courage is getting back on the rink and carrying on your routine after you've been slammed to ice and into the wall, as China's Zhang Dan did while winning the silver medal. Courage is crashing during training runs, getting air-lifted to the hospital and still throwing yourself back down the face of the mountain at 70 miles an hour, as America's Lindsey Kildow and France's Carole Montillet-Carles did in the women's downhill.

"I could not stay in my room and watch this race and I could not watch it from the top of the course, either," Montillet told reporters. "I had lots of pain, but I knew I could grind my teeth and get through it. I prepared too long for this race not to be in it."

That, then, is the best reason why the Olympics are better than "American Idol." They may both feature competitions between people we've never heard of before, people we get to know and root for during a brief period, and people we then quickly forget about. But Olympians put so much more of themselves into this. This is their lives, not a grab for easy fame.

They sacrifice so much, the least we could do is pay attention.

Consider the final alpine race Saturday night under the lights at the Sestriere slalom course, where the Austrians finished 1-2-3, reasserting their status as kings of the mountain despite all the hype about Bode and the Americans. When they received their medals, Ben Raich, Reinfried Herbst and Rainer Schoenfelder waved their arms, pounded the podium with their fists and kissed it with their lips. They stood in pride for their national anthem and watched fireworks light up the mountain night.

My favorite was Ivan Borisov of Kyrgyzstan, a poor, land-locked country the size of South Dakota that was part of the former Soviet Union. Like many a skier on the tough course, Borisov missed a gate near the bottom of the course. He didn't give up though, struggling back up the hill and then resuming the course. He finished more than 30 seconds behind Reich. It was the worst time of the day, and even then, it didn't count because he was disqualified for originally missing the gate. There were no throngs of fans from his country watching -- indeed, almost all the spectators left after Raich's run -- no reporters waiting to interview him, no one watching on TV.

The ratings weren't very good for him, but so what? He competed for his country at the Olympics. Unlike Bode, the man with the Nike contract and the book, Borisov also completed the course, whether the officials recognized it or not. And if millions missed Kyrgyzstan Idol because they were watching something else, well, too bad. It was their loss.

Vancouver is four years away. Set your TiVo now.