ST. LOUIS -- Michelle Kwan did not skate in the U.S. Figure Skating Championships this past week to earn a spot on the Olympic team. Instead, she sat at home, nearly 1,800 miles away in Los Angeles, and simply tuned in to ESPNEWS to find out she had been selected to compete in Torino, Italy.

Kwan, if you don't know by now, petitioned for a spot on the team because she said she was unable to compete at nationals with a pulled groin muscle, her second major injury in the last four months. But her quest for her first Olympic gold remains healthy. 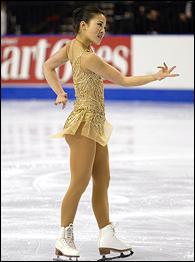 What Kwan is really after is not so much to be a part of the team in Torino. She's been to the Olympics before. She wants very badly to be part of another elite group. On Saturday, in between the men's and women's finals, figure skating fans got the rare opportunity to see all 12 living American Olympic gold medalists gathered together on the ice. Everyone from Dorothy Hamill to Kristi Yamaguchi to Kwan's one-time rival, Tara Lipinski, was there.

Kwan can't petition for a spot on that team. She'll have to skate in Torino for that honor.

"I believe that I will be 100 percent for the Olympics, and I feel I have a shot to win," Kwan said Jan. 4, the day she announced she would withdraw from the U.S. Championships and just days before the nationals were set to begin.

At 25, Kwan has had two previous opportunities for Olympic gold. A prohibitive favorite in both appearances, Kwan skated tentatively in Nagano and was upset by Lipinski. In 2002, Kwan was the leader after the short program but had to settle for the bronze. Another American teenager, Sarah Hughes, won the gold that year.

Although Kwan believes she has a shot at the gold this time around, she hasn't won under the sport's new scoring system, which will be used in Torino. She missed all of her international competitions this season with injuries. In her only showing with the new system, the 2005 World Championships in March, she was fourth. She said afterward that she was going to do more homework to fine-tune her programs to meet the new scoring system's demands. The last time the public saw her skate was in a made-for-TV competition in Boston in December, and she failed to land a triple jump.

As Scott Hamilton put it this week in St. Louis, "I've always looked at the Olympics as a privilege, not a right." That said, Hamilton admitted that Kwan is in an unusual position. After all, she is Michelle Kwan, and few of the average Americans watching the Games on TV are familiar with any other U.S. skater.

Ever since Kwan emerged on the national scene when she was 13, she has maintained an image of all that is right in sports. She has been a respected champion, winning the national title an incredible nine times and the world championship five times. She has lost gracefully, as well. In fact, when she finished second to Lipinski in Nagano, in 1998, Kwan still won many endorsement deals and remained beloved by her devoted fans.

Yet her decision to petition for a spot on the Olympic team marks the first time that Kwan's previously Teflon shell might be penetrated. Should a skater who has had the chance twice before to compete in the Olympics, and a skater who knows what it feels like to bumped from an Olympic team as she was in 1994 during the Tonya-Nancy debacle, have the right to take away another skater's chance to be a part of the Olympic Games?

Life can go on without competing in the Olympics, but it's certainly not easy -- especially if you feel as if you skated and earned that right. In 1992, Todd Eldredge was given a medical bye for a back injury and was selected to compete in Albertville, finishing 10th. Mark Mitchell, the third-place finisher at nationals that year, watched the Games on TV with a close friend.

Now a successful coach for nearly a decade, Mitchell has come to terms with that difficult time in his life. "Hopefully," Mitchell said, "I've set an example that not competing in the Olympics was not the end of my life."

A group of U.S. Figure Skating officials, judges, skaters and coaches voted 20-3 that Kwan, indeed, had earned the right to go to Torino. The group accepted her petition for a medical bye, pending her performance at a special monitoring session Jan. 27.

One committee member, who asked not to be identified for this story, said there was no discussion as to how Emily Hughes, the third-place finisher at nationals and the younger sister of gold medalist Sarah, had performed in St. Louis. The entire focus was on Kwan and what parameters she would need to meet to make the team.

None of the top three finishers in the women's event skated a flawless routine. Sasha Cohen's program was riveting and at times eye-popping, but she, nevertheless, stepped out of a triple toe loop. Kimmie Meissner landed two triple-triple combinations, a technical feat Kwan has never achieved in competition, but fell on a double axel in the waning seconds. Hughes, meanwhile, mustered just four triples.

If Kwan performs the way we've seen her perform the last few years, with the exception of the recent "competition" in Boston, she could still be among the best women skaters in America. She's been one of the most reliable skaters and one of the most beautiful to watch, no matter if she is being judged in a system of perfect 6.0s or one with lots more decimals.

But it's not so much her skating that is being challenged lately, but her image. Could Kwan, of all people, be the one who takes candy away from a kid?

"I know that it has caused a lot of attention in the media, but it is a decision that is not up to me," Kwan said after being named to the Olympic team late Saturday night. "With all my heart, I wish I was in St. Louis competing. I have been to 13 nationals, and I haven't missed one. So it is really disappointing to sit home and watch.

"I have gone through a lot of emotions. I have a great support system around me. I have been getting text messages from competitors at nationals, and it has been keeping my spirits high. It is a positive vibe."

So what is Kwan's exit strategy? How can she maintain her winning image under these circumstances?

She has a few choices. She can be monitored Jan. 27 and make the decision that she is not healthy enough to skate in Torino and withdraw. That would once again make her the gracious champion who allowed a young skater a chance to absorb the Olympic experience.

Or she could train as much as possible and skate a riveting performance in Torino -- even if she doesn't make it to the Olympic podium -- proving that she has the Olympic competitive spirit. Not medaling, but performing from the heart, would only extend her legendary status.

The other option is that could actually win the darn thing. No, she hasn't conquered the new scoring system. Yes, nearly everyone has all but crowned Russia's Irina Slutskaya the champion.

But there is something about Kwan that you can never count out. She has proven the naysayers wrong time and again. And if Kwan said she will be healthy, it's hard not to believe her.

As she said Saturday night, "My body is pretty amazing. Everybody's bodies are amazing if you have the mind for it. It was a really difficult couple of months, and it is frustrating. I know I will be better, and I know that I can be in fit form for the Olympics. I am very confident in how my body will react."

But if she opts to compete and then withdraws shortly before the women's short program Feb. 21, her legacy forever will be tarnished. Taking a spot in Torino simply for endorsement deals and a chance to boost TV ratings wouldn't make her much of an Olympic hero.

Kwan has always handled herself well, and there is the sweeping assumption she'll do the right thing this time.

If she does, then she won't have to be a part of any exclusive gold-medal club. She'll be in a class all of her own.

Amy Rosewater is a freelance writer based in Baltimore.