TORINO, Italy -- Michelle Kwan wasn't selfish for trying to skate in one last Olympics. At least no more selfish than any other athlete ever is.

Kwan is a nine-time U.S. champion and a five-time world champion. She's the most decorated figure skater in U.S. history. She was the face of figure skating during the sport's highest popularity. Yet, what we constantly brought up was how she had never won an Olympic gold medal, that her career was incomplete without it. 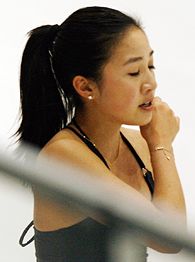 And then we blame her for hanging on too long trying to win one?

If U.S. Figure Skating didn't think a healthy Kwan would be one of the country's three best skaters to send to the Olympics, then it should have rejected her petition last month. But you can't blame Kwan, the athlete, for trying every reasonable means to reach the only goal we say matters -- Olympic gold.

Let us remember that Kwan should have skated at the 1994 Olympics, but was dropped to an alternate role when Nancy Kerrigan got a medical bye and the USOC allowed Tonya Harding to skate despite her suspected role in the knee-capping. Kwan didn't complain. She flew to Norway, trained on her own in Oslo in case she was needed and never whined that she had been cheated out of an Olympic chance, when in fact, she had been.

(She also never complained about having to ride in a Disneyland parade with Mickey Mouse, but that's another story.)

I remember how Kwan skated at the World Championships in Minneapolis shortly after the 1998 Olympics. One after another, the top skaters at Nagano found a convenient excuse not to show (Tara Lipinski bagged out within two days of winning the gold), but Kwan honored her commitment. She could have dropped out like everyone else, but she competed because she felt an obligation to her sport.

How many more fans did the U.S. gain because she skated that weekend?

How many more skaters are there because Kwan "hung around" for more than a decade?

What do we want anyway? Would we be happier if, after losing in Nagano eight years ago, Kwan had instead signed on for a cross-country tour of "Titanic on Ice?" Would it have been better had she dropped out of the sport, started drinking heavily and wound up playing Hold'em on Celebrity Poker Showdown? Would it be better if there was an age limit so that when a skater becomes too old for R. Kelly, she also becomes too old for the Olympics?

Kwan won the previous eight U.S. titles before missing nationals last month because of her groin injury. So if the USOC gave her the benefit of the doubt in this case, she earned it. And when she realized she would not be healthy enough to compete very late Saturday night, she made the decision in time to give someone else a chance.

"When I first put in my petition, I believed I would be 100 percent by the time the Olympics came around," she told a roomful of reporters Sunday through watery eyes. "After yesterday, going on the ice and feeling stiff and doing the flip and pulling my groin again, I don't think I can be 100 percent and I respect the Olympics too much to compete when I don't feel I'm at my best.

"It was the toughest decision I ever had to make, but I know it's the right one."

No one was cheated here. Emily Hughes will compete, just as she would have had Kwan never filed the petition. "I think it was fair that Michelle had all the opportunities to make it the Olympic team and it's unfortunate she's hurt and can't compete," Hughes said in a teleconference call from New York.

Hughes said she was preparing her routine for the World Championships and would be ready to compete whenever the time came up "and right now, it's the Olympics."

The only one who's hurt by this is Kwan (other than NBC's ratings, naturally).

"It was always the dream to win the Olympics. It's always an honor to represent your country," Kwan said. "[But] I've learned that it's not about the gold. It's about the spirit of it. It's about the sport itself. I have no regrets. I tried my hardest, and if I don't win the gold, it's OK. I've had a great career and I've been very lucky. I'll miss the sport. It's beautiful."

Kwan wasn't selfish trying for a gold medal. She was normal.

And if by some chance she's still skating, still "hanging around" in four years, I would be happy to have Kwan represent our country in Vancouver.