TORINO, Italy -- For the record, they say "miracle" in Sweden exactly the same way. 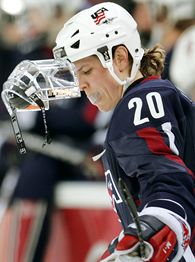 And as the Swedish women danced around the ice, trying not to bump into the still-stunned American women, as they launched into each other's arms, and as they spontaneously threw their hands up into the air in the still-buzzing Palasport Olimpico on Friday night, you could almost hear whoever passes for Al Michaels in Sweden asking into the void: "Do you believe in mirakels?"

In a game no one gave the young Swedes a chance of winning, they answered an emphatic "yes," clawing back from a 2-0 deficit and surviving an overtime power play before finally outscoring the Americans 2-0 in a shootout to make women's hockey history.

"It's hard to believe. When it was over, I had to ask people what had happened. We were the only ones to believe in this result," Swedish forward Erika Holst said.

The victory in Friday's semifinal was the first time in the history of women's hockey (Olympics or otherwise) that the United States lost to a team other than Canada.

But it was that kind of day, all crackly with the impossible and misty with disbelief.

"It is tough and it is hard to take," said U.S. forward Kristin King. "I don't know what to do with myself."

"Sweden was determined," added U.S. coach Ben Smith. "We couldn't bear it when it was time for it. That's what was so frustrating."

Unless the Swedes have another miracle in them in Monday's gold-medal game against the Canadian juggernaut, this will, for a long time, be the game that women's hockey teams talk about. It will become the stuff of legend and the reason women's teams will keep coming back for more.

The gap between world powers Canada and the United States has dominated coverage and discussion of this tournament. Or it did until early Friday evening. Even the Canadian and American women admitted that the best thing to happen to the women's game would be a loss by one of the Big Two at a tournament like this.

"I just wish it hadn't been us," said Natalie Darwitz.

Added Angela Ruggiero, a three-time Olympian: "Everybody talks of the USA and Canada, but this may just open the world's eyes to the fact that there are other teams out there. We're back on our heels right now, but if you can take something positive away from this, then maybe it's that."

And certainly, if you were going to lose the game of a lifetime and take one for the sisterhood, as it were, you could hardly have scripted a more dramatic way to go about it.

Former NHLer Mats Naslund, the GM of the Swedish men's team, watched just five minutes of the game and concluded the lady Swedes had "no chance."

The Americans scored twice on the power play to take a 2-0 lead and outshot the Swedes 27-9 through two periods. But Maria Rooth's second goal of the game, a shorthanded effort after a ghastly turnover behind the U.S. net, left the game tied at 2 heading into the third period.

Even when Sweden trailed by two and seemed to be overwhelmed, there was never any doubt, Rooth insisted.

"We had committed ourselves to winning this game. We talked last night, we had a big team meeting, we just asked everyone to go to their rooms and really think about what it would feel like to win and just see the picture in front of them when we win, and every single player did," she said. "I think that was the key thing, that everyone had seen this happen before we went on the ice today."

Through the third, instead of simply going for the throat, as they had done in a preliminary round game against Finland when they scored five times in the third to erase a 3-2 deficit, the Americans seemed tentative, as if they sensed that somehow this was different.

During the 10-minute overtime, the Americans pushed the Swedes to the brink, outshooting them, 8-3. During an overtime power play, they fired shot after shot at the net but could not dent Martin, who will play U.S. college hockey next season. With about 2:30 left in overtime, Martin kicked out a wicked Angela Ruggiero slap shot through traffic to keep the Swedes' chances alive.

In the shootout, four straight American shooters failed to solve Martin. As though the hockey gods were testing the Swedes' resolve, Ruggiero actually had a second opportunity to open the shootout scoring. Her first attempt was blocked, but officials deemed Martin had moved from her crease too early and so Ruggiero went in again, dekeing but losing control of the puck before she could stuff it in the open net.

The next Swedish shooter, Pernilla Winberg, beat Chanda Gunn to the left side to give the Swedes a one-goal lead. Then Rooth, the fourth shooter, sealed victory with an almost identical goal to put the Swedes up 2-0 in the shootout with one American shooter left.

"First of all, I didn't really know if we had won it or not, so I was celebrating my own goal, but I had to look on the bench to see if they came out toward me or if they didn't. When they did, I just kind of lost it," said Rooth.

"I can't believe it. This is awesome," Martin said, standing happily in her gear, mask tilted back on the top of her head. In the distance, occasional shrieks of delight echoed down the hallway.

Gunn had been the hero of last spring's World Championships, when the Americans defeated Canada in a shootout to win their first gold medal at that tournament. This time, she raced to the bench as the Swedes spilled onto the ice and flung down her gloves and mask.

She appeared headed for the dressing room when coach Smith stopped her, and she returned to the ice for the ceremonial handshake, actually leading her teammates before disappearing quickly into the changing area.

"I was the only person who could have won or lost the shootout for my team, and we didn't win, so I wasn't feeling great," Gunn said later, her voice cracking, eyes red. "The first thing I wanted to do was get off the ice. The last place I wanted to be was hanging around the celebrating."

Asked what her teammates had said to console her, Gunn sobbed. "My teammates. I wouldn't choose 19 other people in the world to play beside," she said. "They're all very supportive of me."

Some will point to the controversial decision to cut veteran forward Cammi Granato last August as a significant factor in this disappointing American loss. Or the decision to cut back on the training program and exhibition schedule. But that would be assuming this is really a loss. Maybe it was Elander who put it best, taking time from his team's rare accomplishment to thank the Americans and Canadians for helping the Swedes to get this good.

"We have to thank the U.S. and Canada for the possibility of playing against them. Sweden is now part of the league of top women teams," Elander said, a heartfelt nod to the North American powers who have consistently invited other nations to play exhibition games against them and observe their training and development programs.

Wrapped in a Swedish flag, defenseman Joa Elfsberg said she hoped the news was greeted with excitement back home in Sweden.

Asked what it felt like to see the second shootout goal hit the back of the net, she paused, tears welling up in her eyes.

"I felt it all day that we were going to make it to the finals," Elfsberg said. "Yeah, we did it, but it was unreal that we beat U.S. for the first time and we do it in an Olympic semifinal."