He has a single memory that stands out from his five-gold-medal performance in Lake Placid. He can't quite explain why, but it's not a memory from the oval, or the medal stand, or even anything celebratory. 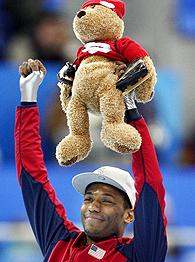 Heiden finds himself, again and again, back in a tunnel leading away from the snow-encrusted ice and down toward the locker room. It was the day he broke the world record in the 10,000-meter discipline. It was the day after the Miracle on Ice. Heiden remembers how long that hallway was, and how it led away from all the lights, toward a door.

"I was leaving a bright place and going into a dark tunnel," Heiden said Saturday. "And I'm wondering, 'What's in store?' "

Heiden was the man of the moment, and still he left it behind even as it happened to him. He sped forward, into the unknown. And Saturday, as he relived that feeling again, Heiden looked out at the rink here in Italy, and a solitary man in a ski hat floated by. The man clasped his hands behind his back and moved slowly, not looking anywhere but straight ahead, into his own tunnel.

Moments later, that man took off his hat and strode into history, becoming the first black to win an individual gold medal in the Winter Games. And of course, Shani Davis did it by coming out of nowhere, going from 25th after one split, to seventh after two, to first at the finish.

Not everyone likes Shani Davis. Some think he was selfish for not joining the team pursuit race the day before the event he's dreamt of winning since he was 8 years old. Others think he's simply difficult, or too bitter. Others still don't like his mother, saying she's too involved. When asked after Davis' performance whether he's happy for the gold medalist, Chad Hedrick complimented only silver medalist Joey Cheek. "I'm happy for Joey," Hedrick said.

To which we should reply: Whatever. The soap opera is for today, but history is forever.

History will not remember Shani Davis for a specific decision he made or for any personality quirks he has. Nor should we. How many remember the disturbance Heiden caused? He said the Olympics were overrated. He said, "Heck, gold medals, what can you do with them? I'd rather get a nice warmup suit. That's something I can use. Gold medals just sit there. When I get old, maybe I could sell them if I need the money."

That didn't go over any better in 1980 than Davis' outspokenness does in 2006. But who cares? Dozens or hundreds or even thousands of African-American kids will put on skates because of Shani Davis, and that is so much more of a legacy to America than joining one extra race. All due respect to Hedrick, but Davis goes stride for stride with the Texan in contribution to Team USA, and he might even be moving ahead. Perhaps Heiden's modern-day complement is not Hedrick, but Davis.

That's especially so when we have people like Bryant Gumbel telling us to "try not to laugh when someone says these are the world's greatest athletes, despite a paucity of blacks that makes the Winter Games look like a GOP convention."

That comment is also for today. Davis' story, from a childhood where he was made fun of for wearing tights, to his place in sports lore, will go on. Mr. Gumbel will talk his entire career and say less than Davis did Saturday without a word. And we reporters asked about all the hot topics, from Hedrick to Davis' mother to the controversy over his decision not to race in the pursuit. Davis rolled his eyes. Good for him.

Rumors flew that Davis would blow off the press conference, but he didn't. He mentioned his past hardships, but he also said, "It's not a hard thing for me. I love what I do." He took no opportunity to snipe or whine or lash out. And there were several opportunities to be had. "Regardless of color," he said, "I want to be the best I can be."

Asked if he thought his achievement would create a big stir, Davis said, "I think it would be if this were a bigger sport. It's what people make of it."

Let's hope people make a lot of it.

There is a long tunnel between the ice and the locker room here in Torino, as well. Davis walked it Saturday, alone in his thoughts. Maybe he'll remember that walk as long as Heiden did. Maybe not. But just like speedskating's first American legend, Davis has walked away from the petty trifles of the moment and into a darker, quieter place that none of us can reach -- a place that cannot be touched by words.