TORINO, Italy -- There are no villains here.

When Chad Hedrick skated in the team pursuit Wednesday because "any time you get a chance to skate for your country, you should take it," he was right. And when Shani Davis declined the pursuit because he thought it presented a "conflict of interest" to him winning the gold medal in the 1,000 meters, he was right, too. 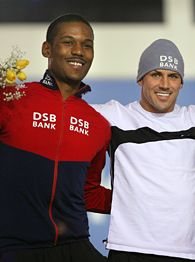 The fact is, they both did what was in their best interests. That doesn't mean one is a patriot and the other a flag-burner. It just means they're human.

"Chad wanted to win five gold medals and he felt a reduction in his chances without Shani on the team," 1994 multiple gold medalist Johann Olav Koss said after Davis won the 1,000. "But Shani was focused on his individual races and doing the best he could for his country, too."

In other words, Koss said, neither was wrong.

Hedrick won the 5,000 last weekend, giving him a chance to match Eric Heiden's five gold medals, but only if the U.S. team won the newly added team pursuit. America's chances for winning the pursuit, however, were diminished when Davis opted out because he feared Wednesday's heat and Thursday's final would take too much out of his legs for Saturday's 1,000. As it turned out, racing Thursday was a moot issue because the Davis-less squad never got out of Wednesday's qualifier.

What would you do?

You devote much of your life to a very individual sport, dreaming of winning a single, specific event -- "Ever since I was a kid," Davis said, "I used to joke around with my friends and say I wanted to win the 1,000 in the Olympics" -- and when you finally near that moment, you're asked to skate a team race you fear might keep you from winning that medal.

Do you race for your team regardless of how it affects your main goal? That's what Hedrick said should have been done.

"I didn't think about how it would affect me. I qualified for Team USA and I came here to skate for Team USA," Hedrick said of racing in the pursuit. "I didn't care how it affected my individual races. I thought about how I can be a part of the team and about all the people who worked hard to help me. Guys like KC [Boutiette] and [Ryan] Laveille, that was their only chance to win a medal. I owed it to them to skate."

Would you do the same? Or would you pass on an event that usually is run at the end of a World Cup event and is not considered as important as the individual events? That's what Davis did.

"A lot of people might think I'm unpatriotic and not a team player, but I've been skating since I was six years old," Davis said. "Maybe if the pursuit was organized better, or if they hadn't brought people over here just to skate it, or if I had been informed about it more than a week before ... If the shoe was on the other foot, would Chad have done the team pursuit if it was the day before the 5,000? We'll never know, but people will do whatever's best for you and that's OK."

Hedrick finished sixth Saturday and said he never expected to win the 1,000. Asked what he thought about Davis winning, he replied, "Shani skated fast today and that's about all I have to say about it." He also said, "I'm happy for Joey [Cheek]," conspicuously leaving out any kind words for Davis.

With everyone from Hedrick to Heiden to Dan Jansen taking shots at Davis for not being a team player, it's clear he isn't the most popular skater on Team Harmony. Still, it was Davis who came off as the most gracious Saturday. Given the chance to respond to that, Davis replied, "I have a lot of respect for Chad. For someone to come over [from inline skating] and do what he has for speedskating, it's phenomenal. I want to see Chad do well. We're competitive, but it's not about being competitive with Chad right now. It's about going out and trying to achieve the goals you have.

Which is to win. For yourself. Be careful about bringing team sport preconceptions into it. Putting themselves first is what athletes do in individual sports.

Skating on a week's rest, Davis started slowly, but few skaters close as well as he does. He virtually flew around the final curve to cross the line with a winning time of 1:08.89, a quarter-second faster than Cheek.

Would Davis have been able to close as well had he skated another race a couple of days earlier? Bronze medalist Erben Wennemars said Davis probably could have skated the pursuit without hurting his performance in the 1,000, while Casey FitzRandolph said he wasn't sure.

"He can handle a lot of work in his legs, but it's hard to argue with his decision not to do it," FitzRandolph said. "I'm not usually the first person to compliment Shani, but I'd say he made the right decision. For the most part, this is an individual sport. To put individual races ahead of team pursuit, that's nothing to be ashamed of there."

Would racing the team pursuit have hurt Davis? The bottom line is we'll never know. All we know is both Hedrick and Davis did what was best for them and that they both won gold medals for their country.

"You can say what you want about Shani," Wennemars said, "but he's an Olympic champion, so he's right."