TORINO, Italy -- This Olympic story does not involve an American. Nor does it involve a sport most Americans watch, or play, or even care about.

This Olympic story is about a Norwegian man, and a Canadian woman, and a simple, split-second act. 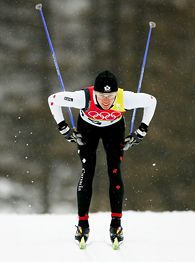 The Canadian woman's name is Sara Renner. She is a cross-country skier. She was in the third lap of a six-lap sprint relay final Tuesday. She was winning. Then, her ski pole snapped. Anyone who has ever laid eyes on snow knows that's the cross-country skiing equivalent of a torn Achilles.

Enter the Norwegian man, whose name is Bjornar Hakensmoen. He's the director of cross-country skiing in Norway. He must have been pleased to see his team slide into medal position. The Canadians, after all, were heavily favored.

But Hakensmoen did something both odd and even. He picked up one of his ski poles and handed it to Renner.

It was a men's pole, 15 centimeters longer than Renner's, but the Canadian muscled her way to a tag zone and reached her relay partner. The Canadian pair was now 2.5 seconds behind.

Renner's partner, Beckie Scott, furiously rushed ahead. She closed the gap. Actually, she obliterated the gap. She gave her team the lead.

The race finished thrillingly -- as thrillingly as cross-country gets, anyway -- and the Swedes narrowly beat the Canadians. Some surely wondered what would have happened if Renner's ski pole hadn't broken. But others looked at the final standings and noticed something.

The Norwegians. They finished fourth.

Now imagine this is, say, hockey. Say it's the U.S. vs. Russia. Or say, it's Game 7 of the Stanley Cup finals. Say Jarome Iginla breaks his stick, giving the Lightning a man advantage. Say John Tortorella picks up a stick from the rack and tosses it out to him. Then, Iginla scores the Cup winner.

Madness, right? Tortorella gets fired. Actually, he becomes a laughingstock -- the Wrong Way Riegels of the NHL. Message boards flare with conspiracy theories. Conan O'Brien jokes that Torts was paid off by Janet Jones. The Around the Horn guys have a field day. Barry Melrose's 'do becomes more famous than Wolf Blitzer's.

What became of Mr. Hakensmoen? Is he being flogged by the Oslo press? Are headless Hakensmoen bobbleheads floating in the Akerselva River?

Hakensmoen was asked by reporters about his actions and he said simply, "This competition, and all competition, it should be a fight. It should not be decided by the skis."

Yeah, but, uh, you cost your team a medal! This race was four years in the making! Can't you be nice next week? Maybe hand your pole to an old lady or something?

What about the Norwegian skiers? They must be enraged.

Or not. The Norwegians actually thanked the Canadians for giving them a chance to make up for an ugly incident years ago when a Norwegian official turned his back on a Swede in need of a pole.

Oh sure, it's not uncommon for opposing teams to help out with equipment in cross-country skiing. "It's kinda normal," said Canadian coach Dave Wood, who has made the same gesture over the course of his career.

Still. This is the difference between sports and sport. We laud athletes who grin as they say they would dunk on their own mother, and we grin ourselves at the thought of Bobby Clarke breaking Valery Kharlamov's ankle in the 1972 Summit Series. We want our heroes to be bloodthirsty gladiators.

But come on. Does a true sportsman want to win because of faulty equipment?

Um, isn't winning everything? On Thursday, Team Canada filed a grievance because one of its speedskaters lost a gold medal to a competitor who allegedly crossed the finish line with one skate in the air instead of both on the ice as mandated. Who cares that the Canadian speedskater -- the silver medalist -- didn't even want to file the grievance in the first place? What of the opinion that, as Herm Edwards says, You plaaaay to win the game?

It's probably delusional to think sports will ever go in this direction. There's too much at stake, too much to gain, too much to lose. That's pretty much why we have The Cream and The Clear.

But maybe Mr. Hakensmoen's gesture has a practical application. Next time you're at a Little League game, and one of those over-involved dugout dads starts screaming about balls and strikes, don't simply turn your head and sigh.

Hand the ump a ski pole.

ESPN.com contributor Carrie Sheinberg contributed to this story. Eric Adelson is a senior writer for ESPN The Magazine. E-mail him at eric.adelson@espn3.com.