KISSIMMEE, Fla.  In its first 35 years, the CITGO Bassmaster Classic had six champions who led from start to finish. Luke Clausen is lucky number seven. 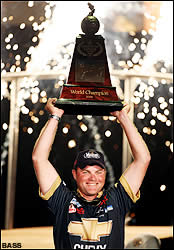 Clausen, a 27-year old professional from Spokane Valley, Wash., jumped to the lead on Friday with a Bassmaster Classic one-day catch record of 29 pounds, six ounces. He staked himself to nearly a five-pound lead on Day Two and facing hellish weather conditions Sunday on Lake Tohopekaliga, held off the field with a five-fish limit that weighed 11-13.

Clausen's consistent performance resulted in a record three-day total of 56 pounds, two ounces and earned him victory in the 36th annual Classic. He also pocketed the $500,000 first prize that accompanies the win.

"It still really hasn't sunk in," Clausen said. "I'm pretty much in disbelief. It's like I'm in the middle of a dream. When I was out there (on stage) and all that confetti is going on and I'm holding that trophy, it's surreal."

Rick Morris of Virginia climbed atop the leader board late Sunday and held the position until Clausen weighed in to close the tournament. Morris finished second with 51 pounds. Arkansas pro Ron Shuffield finished third with 47 pounds, 14 ounces and Terry Scroggins of nearby Palatka, Florida was fourth with 46-15.

Defending Classic champion Kevin VanDam had the day's biggest sack (15 pounds, seven ounces) and finished fifth with a three-day total of 44-8. Clausen, the first to hail from the West Coast, went about his business in the same fashion each day of the tournament.

He fished along the southeast shoreline of Lake Kissimmee and threw a Mann's hard-nosed, six-inch junebug worm to land his lunkers. The worm produced four of his five fish on Sunday, including the day's biggest fish  a 5-pound, 13-ounce bass.

His ability to use a lightweight plastic in the 40-miles per hour winds that swept across central Florida on Sunday required a bit of a change to his technique, Clausen said.

"I kept my rod tip on the water pretty much and I would pretty much reel extremely slow and drag the worm across the bottom," Clausen said. "Because if your line gets up at all, that 40 mph wind (would be troublesome.)"

After Saturday's weigh-in, Clausen said he planned to run to numerous spots on the final day. But heavy rain and wind Sunday morning drove him back to the spot that produced so well for him previously.

"I had a lot of confidence in the area," he said. "(During) my practice, I was in there and I had a tremendous amount of bites. I think the confidence between the bait and the area, it was hard for me to leave and go look at other spots. There were so many good fish in the area. I didn't know of any other place that could duplicate it."

As the other 24 anglers who fished Sunday found out, there were few spots any better than Clausen's. Morris made a 94-mile, round-trip journey to the Kissimmee River each of the three days to seek shelter from the wind. Once there, he threw a War Eagle spinnerbait and a chartreuse-and-white Chatterbait.

He managed to land 13 pounds, 11 ounces on Sunday, but said he had about 15 near misses. Morris, whose highest finish in a Classic came in 1997 when he placed 17th, said as the day progressed, he hoped he could make this tournament his first victory on the BASS tour.

"I was kind of hoping it would be mine," Morris said. "I was second at the Open Championship and I was second here. I seem to be finishing second a lot recently. But you know what? You've got to be second before you can be first."

Shuffield entered the final day practically promising a victory, but said the wind ruined his chances of winning.

"The wind really trashed the areas I had the most confidence in," he said. "I knew if I could win the Classic, it would be in this particular area. But it was trashed, so I wound up having to find other areas."

Shuffield caught three fish for a 7-15 weight on Sunday. Scroggins, who was listed among the pre-tournament favorites also struggled on Sunday, catching 7 pounds, 11 ounces in Lake Kissimmee.

VanDam caught 19 bass on spinner baits in Lake Cypress. Looking for his fourth consecutive tour victory, he held a brief lead, but relinquished it when the Super Six anglers reached the stage.

"(I caught some fish) but I didn't have anything for Luke," VanDam said. "He had a phenomenal (first) day and was consistent the other two. I didn't lose. I got beat."

Clausen's total surpassed the previous Classic record Davy Hite set in 1999 on the Louisiana Delta. Hite caught 55-10 that year. Higher totals have been posted, but that was before the current five-fish limit was instituted.