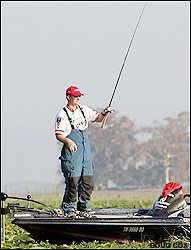 KISSIMMEE, Fla.  When a severe cold front ripped through central Florida last week, most of the anglers who were practicing for the CITGO Bassmaster Classic kept their fingers crossed and hoped for warmer weather to get the fickle Florida fish moving.

Mother Nature kept up her end of the bargain today during the last day of practice for the 36th annual Classic. The sun shined brightly, the temperatures climbed into the mid 80s and the water temperature on Lake Tohopekaliga was 10 degrees warmer than it was last week.

Not surprisingly, the 51 competing anglers were intrigued by the changes and returned to shore this afternoon with good reports and high hopes heading into the Classic, which begins Friday.

"I thought the fishing was easy and good, which I expected it to be with the weather like this," said former Classic champion Jay Yelas. "I didn't see a lot of giant ones on beds, but I did see fish on beds up to six pounds. So I'd say it's going to be pretty good fishing. Everyone should have limits."

Davy Hite, another Classic champion, agreed. He said bringing in a 25- to 30-pound stringer wouldn't be unheard of, but it is unlikely to happen for one angler over three consecutive days.

Encouraged by a good practice session today, Hite estimated it will take 55 pounds to win the tournament.

"It was a lot better than last week," Hite said. "I tend to be more pessimistic going into a tournament, more so than some of the other guys. But if I can execute and expand on what I saw today, I've definitely got a chance."

"I saw a lot of interesting stuff out there," VanDam said. "I'm very pleased."

Not everyone was so enthusiastic, however.