The 35th edition of the CITGO Bassmaster Classic is in the books. The fishing world's biggest show has left town. The Three Rivers' bass population can now relax.

After watching Kevin VanDam's heroics and leaving the Steel City, we pause to assess the Classic Week that was. Based on 23 years of covering Classics, here is one man's look at the good, the bad and the ugly from last week's Big Show.

Kevin VanDam's victory  Long ago I gave the Kalamazoo Kid the moniker "The Total Package." Is there a better all-around angler in today's BASS Wars? I think not. Just as importantly, he has long served as one of the sport's best ambassadors.

And his second Classic championship in four years will serve the sport well.

ESPN's Greatest Angler Debate was a great deal of fun and Rick Clunn is a worthy winner. If the voting was held a decade from now, though, KVD might just be the recipient.

The city of Pittsburgh  Like most of the pros, I was a little dismayed when Pittsburgh was announced as the Classic site. Please excuse my ignorance. The people of Pittsburgh and this section of Pennsylvania provided the greatest hospitality I have ever experienced from a Classic host.

Not only that, but they supported their Classic in grand fashion with large, capacity crowds (13,413 watched the finals) that were enthusiastic about a sporting event that was making its debut in this state. Considering that the Steel City is home to big-league teams like the Penguins, Pirates and Steelers, their enthusiasm was nothing short of amazing.

On-the-water problems with spectator boats and others were largely non-existent. Thirty-six Pennsylvania Fish and Boat Commission officers made sure by patrolling the waterways.

Television coverage  Almost 12 hours of live and short-turnaround coverage on ESPN and ESPN2 is the kind of big-league treatment a Major in golf would receive. Enough said.

BASS/ESPN info stream  If their television was broken or they had to work, fishing fans could still follow every development during the daily weigh-ins  either through live streaming video or the audio webcast. Along with television, it was an impressive effort. 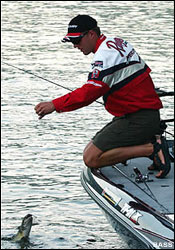 Ray Scott  It was great to have the BASS founder as a featured warm-up act before each weigh-in. It was a fitting honor. Mr. BASS' reception from the Mellon Arena was warm and fanatical. It was apparent that Scott is still very much beloved by BASS members.

Weigh-in set  ESPN created the ultimate weigh-in set for both arena audience and television viewers. Particularly impressive was the 1,000-gallon circular aquarium stocked with the kind of bass that made the Classic contenders drool. It was designed by Gary Lindner from Atlantis Custom Aquariums in Baldwin, Pa.

Skeet Reese's new 'do  The California wild man unveiled a new look that featured shockingly blonde, spiked hairdo  a la wrestler Rick "Nature Boy" Flair. He said it was designed to be an attention-getter. Mission accomplished.

Aaron Martens  Nothing against VanDam, but you've got to feel bad for Martens who posted his third consecutive runner-up performance. Forget the cliché about second place being like kissing your sister; this one left Martens with a considerably worse taste in his mouth.

Water quality  It was very apparent that state and city officials have made great strides in improving the city's environmental image, including the water quality in the Three Rivers. But there is still more work to be done.

In practice nearly a month before the Classic, Virginia pro John Crews reported catching a condom, sanitary napkin and a pair of men's pants on consecutive casts.

Several anglers reported a similar story to that of Jeff Reynolds. The Oklahoma pro started each day fishing around a concrete culvert that was adding clear, oxygenated water into the area. About 10:30 a.m., though, it began emitting a foul-smelling effluent.

"I guess the fish were like me," he said. "Once it started stinking, they decided they didn't want any part of it."

Henry Cho This comedian was really funny  the first day he entertained the Mellon Arena crowd before the weigh-in. The same jokes weren't nearly as entertaining on subsequent days.

Three Rivers bass fishery  There was an old movie titled "The Fish That Saved Pittsburgh." That is not the case these days.

Although VanDam and others went to great lengths to portray the region's bass population as considerably better than it appeared last week, these numbers say otherwise. Sure, it is summertime, a less than optimal time for bass fishing. And, yes, some anglers caught more than a dozen bass a day, but they still had trouble finding five that would stretch past the 12-inch mark.

Former Classic champion Jay Yelas called it "the worst fishery in America." That's a bit of an overstatement. But you have to wonder why the bass don't seem to grow any bigger in large numbers.

Do you realize that the largest bass brought to the Classic scales weighed just 2 pounds, 14 ounces? The next two biggest bass were just 1-15. Only eight limits were caught. Just a total of 219 bass.

VanDam set the record for Classic-winning futility with a three-day total of 12-15. Only seven anglers were able to break the 10-pound mark. And these are the brightest fishing minds in the country.

Cochran's timely absence  Although the television audience have been unaware of it, George Cochran went missing as the highly orchestrated Super Six weigh-in finale was about to begin. As the leader at that point, the veteran Arkansas pro was supposed to take the "hot seat" on the stage until one of the six remaining Classic contenders displaced him.

The minutes passed and still no George. Weigh-in host Keith Alan called for him a couple of times and ESPN officials searched for him. Still no George.

The PITTSBURGH TRIBUNE-REVIEW tied Cochran's absence to a "feud over fishing waters that boiled over" between him and fellow Arkansas pro Jimmy Mize. Mize, the first-round leader, had claimed that Cochran had encroached on his most productive spot the second morning. Cochran denied it and attributed it to sour grapes since Mize did not bring a fish to the scales that day.

Three days later, Cochran said that he was upset that ESPN/Alan had blown the Mize situation out of proportion. He thought it was inappropriate for Alan to put him on the spot on the Classic stage and later for ESPN to put a camera on him apparently in anticipation of a reaction shot as Mize weighed in his catch and was asked about the situation.

"After 25 years of supporting them, instead of patting me on the back for all the years, they stabbed me in the back," he said.
"And I don't appreciate it one bit."

It was apparent that the two-time Classic champion's feelings were hurt. "What made me more upset more than anything was my wife was really upset," he said. "She thought it was really in poor taste. When she left, I left, and I wasn't coming back even if I won the Classic."

Regardless of the reason, it must have looked odd to the Mellon Arena crowd. And it created a buzz among the media and other anglers.