The shirt off his back 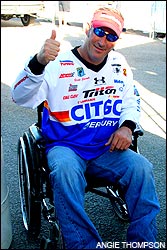 Gerald Swindle is known for a lot of things among his fellow pros and generosity is one of them. Today, he literally gave someone the shirt off his back.

Back in September, Swindle and Marty Stone were doing some pre-season scouting at Lake Amistad when a fan approached them at gas station. He was a member of the Del Rio Bass club and recognized the two pros. He invited them to speak at their club meeting where Swindle and Stone met some anglers who were planning to fish as co-anglers in this week's tournament.

One of those anglers was George "Bodie" Holloway. His plans to fish as a co-angler were cut short on March 2 when a semi-truck turned in front of him as he was traveling on his motorcycle. Holloway was air-lifted to a San Antonio hospital and released on Monday.

Holloway watched the weigh in from a wheelchair today, and when Swindle came on stage, he called Holloway out by removing his jersey and tossing it to him in the stands. An appreciative Del Rio audience gave both men a heartfelt round of applause.

It may take a while for Kevin Short to live this one down.

After not making yesterday's cut, Short went back out on the water today to "fun fish." He brought his wife, Kerry, along for the ride.

"We were just out for two hours," Kerry said. "We just went around the corner from the take off. We saw these two fish on the bed and I caught the buck first and got him out of the way."

"We only had two rods in the boat. I'm sure if Kevin had been holding the rod with the tube bait on it, he would have been the on to catch that big fish."

"If I had caught that fish in competition, I might have made the cut" Short said as he listened to his wife tell her story repeatedly before today's weigh in.

"This lake renews your passion for fishing," said Randy Howell. "It makes you forget all the small fish, all the cold mornings and all the rainy days you've ever experienced."

If you recall Steve Kennedy's battles this week with the monster bass that shook a tree Friday afternoon, you may also remember he was going back for one more crack at her.

Kennedy went not once or twice, but "seven or eight times" on Saturday and failed to bring home a toad. He may try again Sunday since he made the Top 12 cut with 75 pounds, 4 ounce for sixth place.

"I didn't get a bite until the last time I was there, and then I caught a little 2-pounder," Kennedy said. "When I did, three or four others came out with it. She was gone  she could eat all of those little ones."

Nothing changed for Edwin Evers, who is eighth with 74-2, other than realizing the calm conditions made the bedding fish a little more finicky.

In the grand scheme, that may have cost him a shot at the win.

"I got hung up on two fish and stayed with them too long," he said. "One of them ate my bait three or four times, but I had to move so far away from them and make long casts I really couldn't see if she had it. And I had to aggravate them to bite."

Evers was throwing a 7-inch Bass Pro Shops Stik-O plastic bait, a big-fish lure being used by several pros this week. But he caught about 19 pounds to fall from first.

"I feel like I had a horrible, horrible day," he said. "That's sad to catch 19 pounds and feel that way."

Gerald Swindle of Alabama was the first pro below the 12-man cut line, falling short by less than a pound.

"I felt that I had to catch 24 pounds for the cut and I didn't do it," he said. "When you're catching 4-pounders it's hard to adjust."

Swindle eventually switched from his sight-fishing strategy to deeper water, catching some on a Lucky Craft Flat CB-20. But he fell into the trap of pressing to catch something to increase his total, which obviously didn't pan out.

"With just two or three hours left you get in that hurry-up mode and start looking for a 10-pounder," he said. "But that's hard to do. It takes a pretty good fish to cull a 4-pounder and help you out.

"I don't think I've ever had my hands as beaten-up as they are, and I stuck a hook in my thumb Friday," he added. "I had a fish on and when I went to lip her, the hook stuck in my thumb past the barb. So then I was tied up with the fish and the hook, I had to get my partner to cut the line and then yank out the hook with my pliers. That's all I needed, another sore spot on my hands."

Brooks Rogers of Texas also fell hard, from 13th to 28th and out of contention.