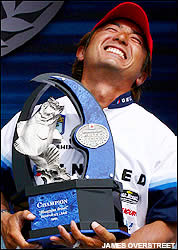 But Sunday during the final round of the Bluegrass Brawl, Morizo Shimizu held the trophy.

Shimizu, the 35-year old native of Osaka, Japan, overcame driving rains and powerful wind gusts to clinch his first CITGO Bassmaster Elite Series victory with a four-day total of 66 pounds, 9 ounces. He entered the day in third place, trailing both Wirth and VanDam, but charged from behind with a 20-pound, 6-ounce sack on Sunday  the largest of the tournament. Shimizu also boated the biggest bass on Sunday  a 5-pound, 7-ounce lunker that provided the boost he needed to seize the lead and the $100,000 check that came with the win.

"Unbelievable and awesome," Shimizu said to the crowd shortly after winning the Bluegrass Brawl title. "A dream come true."

Shimizu carried on the tradition of foreign-born anglers fairing well on this massive Tennessee River impoundment. Norio Tanabe, also of Japan, became the first international BASS event winner when the last tournament was held here in 1993.

Wirth, a Kentucky native and a pre-tournament favorite to win this event, was seeking his first BASS victory in more than 11 years, but fell short in his effort. He finished with a 13-pound, 9-ounce limit on Sunday and took second place with a 64-14 total. VanDam was third with 63-8.

Shimizu's victory wasn't expected after Day One when he found himself in 49th place with a weight of 11 pounds, 7 ounces. But he moved from neighboring Lake Barkley to Kentucky Lake on Friday and caught the biggest bag (19-3) that day. He fished solely on Kentucky Lake for the weekend and continued to climb up the leaderboard.

Sunday's catch provided Shimizu the weight he needed to move ahead of his competitors. He caught his largest fish at approximately 12 p.m. Sunday where the Moors Resort Creek meets Big Bear Creek. He had much of his success earlier in the tournament using crankbaits, but couldn't get the quality bites he was seeking using those Sunday. The switch to a football jig and a Texas-rigged, curly-tailed, 9 1/2-inch Strike King worm on Sunday proved to be key in bagging the largest limit of this event.

"I was fishing in 10 to 16 feet of water," Shimizu said through an interpreter. "I have fished this lake before with another tournament and I know a lot of fish can be caught far away. Usually, I would run 40 minutes or more to catch fish. But this tournament, I looked for closer areas to catch fish. I pre-fished a tournament two or three years at Moors Creek and had a big fish over there. I had a feeling I would have a big fish again in that area."

Turns out Shimizu had a big bite there while practicing for this tournament and he got crafty to protect his spot.

"On the last day of the practice, I had a 6 pounder on my lure, and somebody came by," Shimizu said. "But I didn't want to put the fish up on the boat. So I pretended like it was nothing. That fish came right up to the boat and I saw it was a 6 pounder. I knew there were still big fish to be caught there."

Shimizu learned how to fish on Lake Biwa in Japan. He said that lake is similar to Kentucky Lake in one very important way.

"The man-made breaks; Lake Biwa has that," he said.

Fishing the deep-water ledges was important, Shimizu said, but locating baitfish was the key to his win.

"I was waiting for the baitfish to cruise around where I was at. Where I was running a month ago, in pre-fishing, I was thinking where the baitfish would go a month later for this tournament. That's where I fished."

Wirth said the rough weather conditions hampered the bites that helped him to the Day Three lead.

"It was difficult to put your bait in positions where they were," he said. "They were deep schooling fish and making moves around. I had a little trouble staying with them today."

Wirth figured if anyone was going to catch him on Sunday, it would be VanDam or Shimizu. But he thought if he could boat 15 pounds, he could hold off the field.

Unfortunately for him, it didn't happen.

"There hadn't been a 20-pound sack all week and he came up with one today," Wirth said of Shimizu. "I knew if they caught them at all I was in trouble. They were really the only two guys that could beat me and one of the two caught them. So, he did an outstanding job."