JASPER, Texas  When he arrived in east Texas to practice for the Lone Star Shootout presented by Triton Boats, Greg Hackney had a sneaking suspicion he would fare well in the second CITGO Bassmaster Elite Series tournament of the year.

He was fresh off a top-five finish at the season-opening event on south Texas' Lake Amistad and was finding quality fish a few days later here on Sam Rayburn Reservoir. When he seized the first-day, it looked like the Louisiana pro's hunch might prove true.

Hackney rallied to regain the lead Saturday and with a 20-pound, 8-ounce sack on Sunday, he held on to claim the Lone Star Shootout title. He earned $100,000 for the victory, his third on the BASS circuit.

Hackney finished the four-day event with 20 bass that totaled 79 pounds, 10 ounces. Dean Rojas, who stayed in second on the leaderboard for much of the event, was runner-up with a 75-13 total. Kevin VanDam placed a distant third with 68 pounds, 1 ounce.

Of the 20 fish Hackney landed, 19 were caught on Strike King Zero plastics. He targeted shallow water near willow and cypress trees in areas that had a mix of vegetation. He worked methodically in his areas to land his lunkers.

Hackney's final day didn't go off without a hitch, however. He said there were hundreds of recreational boats on the popular reservoir and that a fleet of 40 boats followed his every move. But early in the morning, when he had yet to land a limit, many of the boats moved on.

That worked to his advantage, Hackney said.

"There were tons of boats everywhere today," he said. "But they left and, when they did, I proceeded to whack them. What happened is the fish got settled. It's only a few feet deep where I was and (the boats) were running around." 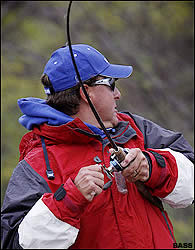 Hackney landed most of his keepers between noon and 1. His biggest fish of the day weighed 6 pounds, 3 ounces.

But when in took him until 11 a.m. to land a limit, he began to fret that Rojas or VanDam might sneak past him for the victory.

"I was getting worried," he said. "I had missed a couple opportunities for some 3- to 5-pounders. I broke one off. It was my fault because I really jerked the rod hard."

But things on the water have gone Hackney's way in the past few years and they did again Sunday. He said it's a combination of factors that have made him successful in his lifelong passion.

"It's just a mental thing, probably," he said of his success. "I've been doing this my whole life, but over the past four years I've just got a lot of confidence in my fishing ability. And I really love what I do. I get up every morning and say I'm blessed."

Rojas climbed into the lead with only Hackney left to weigh in. Though he had a 19-pound, 6-ounce bag Sunday, he felt that it wasn't going to be enough to overcome Hackney.

"I didn't think I had that much," Rojas said. "I was surprised it was 19 pounds. To catch 19 pounds on the last day of a tournament is hard, you know. I just got beat today."

VanDam temporarily held the lead after he weighed in a 15-pound, 3-ounce bag Sunday, but he was quickly replaced by Rojas.

Bill Lowen, a tour rookie, finished fourth with a 64-13 total over the four days. Mark Tyler was fifth with 64-3, John Crews sixth with 64-3 and Stephen Browning seventh with 63-1.

"I'm really happy to be going home," Hackney said. "But I'm so proud of that trophy right there. I really wanted it so much."