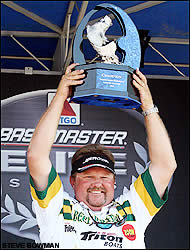 MANNING, S.C.  When Preston Clark launched Sunday morning to begin the final day of the Santee Cooper Showdown presented by MotorGuide, his primary goal was to win the tournament.

And if Clark broke the record for total weight caught over a four-day event, that would be icing on the cake.

Clark bagged 23 pounds, 5 ounces on Santee Cooper Reservoir on Sunday. The five-fish limit, his fourth of the tournament, gave him a 115-pound, 15-ounce total and secured not only the record, but the $100,000 that goes with the victory on the CITGO Bassmaster Elite Series trail. The weight bettered by more than seven pounds the previous four-day catch record that has been held by Dean Rojas since 2001.

Clark has had a meteoric rise in his second year on tour. He had an excellent showing at the Bassmaster Classic in February where he landed the largest bass (11 pounds, 10 ounces) in the history of the tournament. Two months later, he now holds the BASS tournament catch record  one of the most-coveted standards in the sport.

The Palatka, Fla., resident didn't see himself doing so well, so fast.

"No one can imagine the year I've had starting out," Clark said. "Nobody could ever dream to have a year start like this."

Clark entered Sunday's action with 92 pounds, 10 ounces and needed just more than 16 pounds to break the record. He was confident he would do so because he planned to target an area that had been loaded with bass, one of them as big as 10 pounds. But strong winds on Saturday dirtied the water there, and made his preferred sight-fishing technique difficult. So Clark moved and found a similar backwater area about 200 yards away and began throwing the Zoom Critter Craw in pumpkin seed color that had been so successful for him throughout the tournament.

"I caught almost all my fish around pads on the inside of pockets," he said. "And when the water temperature went up, they actually started bedding on the outside of pockets in cypress trees."

Clark had to work hard for his catch. He felt the conditions (clear skies, warm temperatures and bedding bass) would be ideal for sight fishing on Sunday. But he said that wasn't the case, at least not for him on this day.

"I don't know what made it difficult," Clark said. "The big fish should have bit like crazy today and they just didn't...I fully expected out of the 12 guys for there to be three or four 30-pound bags."

As it turned out, there was only one 30-pound bag landed Sunday. That catch came from Alabama's Aaron Martens who boated 32 pounds, 10 ounces to give him a four-day total of 108-4. Martens, who entered the day in 10th place, stayed atop the leaderboard until Clark weighed in to close the tournament. He finished second overall.

Four other anglers joined the Century Club on Sunday. California's Skeet Reese finished with exactly 108 pounds for the tournament and finished third overall. Stephen Kennedy, a tour rookie from Alabama, placed fourth with 104-2 and caught the big bass of the day  a 7 pound, 12 ounce lunker. Kelly Jordon, who won the last BASS event here in 2004, placed fifth with 103-3. Rojas, who presented the winner's trophy to Clark, placed sixth with 102-10.

Despite his considerable bag caught on Sunday, Clark said he began to worry earlier in the day that he didn't have enough weight to clinch his wire-to-wire victory. It was the first time he doubted his chances, he said, after he vaulted to the top of the board on Thursday with a 39 pound, 6 ounce sack  the third largest in tour history.

"I thought I needed 25 to win," he said. "I didn't think I had as much as I did. I thought it was 20 and it was 23. My goal was 25 to close the deal...but before we ever got in line, we were out on the water, and Skeet came up to me and asked me how much I had and I told him and he congratulated me. Skeet Reese is a class guy and I'm lucky to have him as a friend."

Clark plans to use his winnings to pre-pay for his infant daughter's college education. His wife Katrina is also expecting triplets.