TOURNAMENT WATERS: Tournament waters will be High Rock Lake and all rivers, creeks and canals connecting to High Rock Lake. Only water open to ALL public fishing will be considered tournament waters. Any water closed to public fishing will be closed to this tournament's contestants. 6 hole course will be on Lake Townsend. 6 hole course will be off limits to fishing during practice.

FOR LODGING AND ADDITIONAL INFORMATION: www.greensboronc.org

TOURNAMENT WATERS OFF-LIMITS:
PROS: The tournament waters shall be off-limits to all competitors commencing at sunup, 30 days prior to the first practice day.
NON-BOATERS: The is no off limits

Read Rule #3 carefully regarding the "no information rule" during the off-limits.

Entry Fee/Balance Deadline Dates are the dates the balances are due. The entry fee deadline date applies only to the co-angler. Professionals have a separate payment plan. You will not receive any further notices on balances due. It is the angler's responsibility to be sure payment is made by the balance deadline date. Balances can be paid on line at www.bassmaster.com if you paid your deposit online.

DEPOSITS ARE NON-REFUNDABLE AND NON-TRASNFERABLE REGARDLESS OF DATE OF CANCELLATION. ANY BALANCE OF THE ENTRY FEE PAID IN EXCESS OF THE DEPOSIT WILL BE REFUNDED ONLY IF NOTIFICATION IS MADE TO THE BASS TOURNAMENT DEPARTMENT PRIOR TO THE ENTRY FEE/BALANCE DEADLINE DATE.

ALL MEETING TIMES ARE LOCAL. A PACKET WILL BE MAILED TO YOU APPROXIMATELY 3 WEEKS BEFORE THE EVENT WITH MORE INFORMATION.

About the American's namesake: Bryan Kerchal 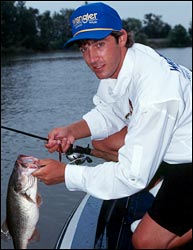 Four years to the day after BASS founder Ray Scott came up with the idea of professional bass fishing and the Bass Anglers Sportsman Society, Bryan Victor Kerchal was born.

Kerchal is best known as the only Federation Nation angler to win the prestigious Bassmaster Classic, claiming the championship in 1994. He is also one of few anglers to qualify for the Classic from the ranks of the Federation Nation in consecutive years. Kerchal, a short order cook in Newtown, Conn., earning $150 a week, finished last in 1993, prompting BASS founder Ray Scott to tell a packed auditorium that if his fishing didn't improve, he'd wind up back home flipping burgers.

Instead, Kerchal rebounded with a vengeance, qualifying through the Federation Nation for the 1994 Classic on North Carolina's High Rock Lake, and then winning it  edging Tommy Biffle by just four ounces in one of the closest Classics in history.

His new fame put pressures on the young angler. In addition to the hectic schedule of a professional fisherman, Kerchal had the added burden of a Classic champ's speaking engagements and personal appearance itinerary.

On December 13, 1994, less than five months after winning the Classic, Kerchal was attending a sponsor function in Greensboro, N.C., When it was over, he made his way to the Greensboro Airport to catch American Eagle Flight 3379, a small plane bound for Raleigh-Durham just 70 miles away. From there, he was scheduled to fly to New York where his fiancée would drive him to Connecticut, where he lived with his parents. Kerchal was afraid of flying, but his new lifestyle left him little alternative.

Just before the plane reached the Raleigh-Durham airport, the control panel indicated that one of the engines had failed. While the pilot was trying to determine which engine was out, the plane stalled and crashed just four miles from its destination, killing 15 of the 20 persons onboard, including the reigning Classic champion. He was 23 years old.

After Kerchal's untimely death, his family and friends established the Bryan V. Kerchal Memorial Fund. His legacy lives on through the Fund's promotion of fishing activities for young people. Since its inception, the Fund has provided assistance to youth programs from Connecticut to California.

Bryan's Fishing Camp opened in Connecticut in the summer of 1998. Children between 7 and 15 years of age can attend free of charge and learn fishing techniques, natural resource protection and the joys of fishing and nature.

For Kerchal, fishing was a way of escaping the pressures and stresses of everyday life.

He wrote this poem about himself:

The reason I go fishin' all by myself
Is to sort out my problems.
Put them up on the shelf
Sometimes I just sit there
I sit there and cry
Sometimes I sit there
And let time pass me by.