And in fishing, "the catch" is George Perry's world record largemouth bass taken on June 2, 1932 from Lake Montgomery, an oxbow of the Ocmulgee River in South Georgia. The fish weighed 22 pounds, 4 ounces and is the most sought after sportfishing record in history.

In 1932, George Washington Perry was a 20-year-old farmer living in rural Georgia. This was in the depths of the Great Depression and fishing was more than recreation. It was a way to get food.

Spring was wet that year, and on June 2 the fields were too soggy to work. So Perry and his friend Jack Page set out for Montgomery Lake to do some fishing. They kept a small homemade boat there and carried a single rod, reel and lure. Each would take a turn casting while the other sculled the boat.

At some point, Perry noticed a disturbance near a shallow stump and made a cast to it.

I don't remember many of the details but all at once the water splashed everywhere. I do remember striking, then raring back and trying to reel. But nothing budged. I thought for sure I had lost the fish  that he'd dived and hung me up. I had no idea how big the fish was, but that didn't matter. What had me worried was losing the lure.

The lure was the only one they had, a Creek Chub Fintail Shiner, and their day would be over without it.

Fortunately for Perry, the lure wasn't hung up at all, and in a moment the fish moved. The battle was brief and soon he was lifting the bass into the boat with both hands.

Neither Perry nor Page had any idea that the bass might be a record of any kind. In fact, there really weren't any records in those days. Although Field & Stream sponsored an annual big fish contest and maintained the most authoritative records of the day, they did not list world records at that time.

All Perry and Page knew was that the bass was bigger than any they had ever seen. "The first thing I thought of was how nice a chunk of meat to take home," Perry told Sports Afield almost four decades later.

But before they took the bass home, they stopped at the nearest town, Helena, and pulled into J.J. Hall's General Store to show the fish off to anyone who might care. Once inside, Hall pulled out a tape and measured the bass at 32 1/2 inches long and 28 1/2 inches around.

Then they took the bass to the post office and got it weighed on a set of certified scales where it registered 22-4. Someone told Perry about the Field & Stream big fish contest, they found an issue with the submission rules and he entered his catch.

After that, Perry took the fish home and cleaned it. It was a female full of roe. His mother fried one side of the fish for dinner to feed the family of six. The other side was dinner the next night.

Of course, Perry's entry won the Field & Stream contest. For his victory he collected a shotgun, shells and some clothes  $75 worth of outdoors gear in total.

It would be two years before the catch would be recognized as a world record. That's when Field & Stream reviewed their contest records and decided that Perry's catch belonged on top of the largemouth bass category. That same year Perry won the annual contest again, this time with a 13-pound, 14-ounce bass taken from Georgia's Altamaha River.

Perry received little notoriety for his catch. He died in 1974 when the plane he was piloting crashed into a mountain in Birmingham, Ala. This was not long after Ray Scott founded the Bass Anglers Sportsman Society (BASS) and just before the sport of bass fishing really boomed. Had he caught the fish today, many speculate that it would be worth millions. All Perry got for the catch was the Field & Stream prize package.

Naturally, with any record that is so revered and which came so long ago, there is controversy surrounding Perry's catch. Part of the problem was the lack of photographic evidence. The Field & Stream contest didn't require photographic proof, so none was submitted. Furthermore, Perry's entry was lost by the magazine in the 1950s after loaning the materials to an outdoor writer. 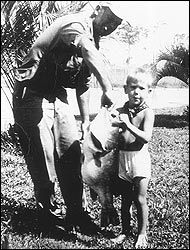 It wasn't until 2005 that a photograph of a man and a little boy holding an extremely large bass surfaced in the effects of a woman whose family was close to Perry's. Though the man in the photo is not Perry (is it Jack Page?) and neither he nor the boy have been positively identified, the background appears to be the area just outside the Helena post office. Record aficionados were thrilled at the possibility that were actually looking at a photo of the fish.

That a photo surfaced at all is not entirely surprising. In recently discovered correspondence between Perry and the Creek Chub Bait Co. in the mid-1930s, Perry referenced at least two such photos  one that was "not a real good photo" and another he described as "a real good picture of myself and the big Bass together...." If the photo discovered in 2005 is one of these, it must be the former since family members agree that Perry is not the man pictured.

Another controversy surrounds Jack Page. Who was he? Where did he go? Did the two men have a falling out over the prize materials or the fish  neither of which Perry shared? Page has completely disappeared.

It's also true that there's only been one other certified bass weighing better than 18 pounds ever taken from Georgia waters. What are the odds that there would be more than a 4-pound (23 percent) gap between the two biggest bass? A look at almost any other state's records shows that mere ounces separate the top catches.

Could the bass have been something else? Some have speculated that it might have been a striped bass and that locals might not have recognized a striper as something different from a largemouth. It's almost certainly true that stripers swam in those same waters.

Ultimately, the controversy doesn't matter. For generations of bass anglers Perry's mark has set the standard and is the number we dream about. Nothing less will do.