BIRMINGHAM, Ala.  Pam Martin-Wells' hands were shaking as she exited the stage at the Birmingham-Jefferson Convention Complex with the lead in the inaugural Women's Bassmaster Tour Championship. 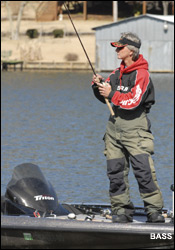 With only Saturday's final round remaining, Martin-Wells of Bainbridge, Ga., holds more than a four-pound lead, but even that significant margin may not allow her to sleep better on the eve of the history-making finale of the first WBT season. The winner of the event will receive a $50,000 Triton/Mercury rig and $10,000 cash.

Martin-Wells weighed in 10 pounds, 9 ounces Friday for a 22-15 total from Lake Mitchell. With weather conditions conducive to spotted bass fishing, the leader knows that fishing conditions could change quickly on the Coosa River impoundment.

"This is an excellent fishery," Martin-Wells said. "The weather has been holding it back. All of these (11 other) ladies are excellent anglers, so I won't be comfortable until it's over. I know that, at any moment, somebody could come in with a 20-pound bag."

Although she may be anxious, Martin-Wells said she had confidence in the strength of her pattern holding out for one more day.

"I should be able to do what I've done," she said. "I did a lot of running around because I didn't want to burn any one spot."

"I did exactly the same thing I did Thursday," said Muse, who is trying to recover from a bout with pneumonia. "I used one rod all day and culled four keepers, so I'm not going to change anything. I'm fishing real slow in 35 to 40 feet of water, back and forth in a half-mile area."

Glasgow, who weighed in 10-6 Friday to move into the tie, said a change of strategy helped her move up.

"The only thing I did differently was I stayed with the fish I caught early yesterday," Glasgow said. "I made the wrong choice yesterday by leaving those fish. I stayed with them today and was able to do some culling.

"I'm not saying I'll do the same thing Saturday. If I sit on those fish and don't get the key bites, I might go fish in some areas where I know there are some four-pound largemouths."

Only one ounce back in fourth is Tammy Richardson of Amity, Ark., who weighed in 11-1 Friday for an 18-6 two-day total.

"I'm catching all spotted bass and it's been a morning bite for me," Richardson said. "After 11 a.m., it gets tough."

Reigning Toyota WBT Angler of the Year Dianna Clark of Bumpus Mills, Tenn., is fifth at 17-15, followed by Juanita Robinson of Highlands, Texas, at 15-13. 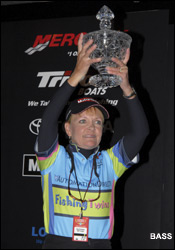 On the co-angler side, Keri Schieber shot from eighth to first, making her the first Women's Bassmaster Championship co-angler division champion.

Schieber of Cummings, Ga., brought in five fish for 11-7 Friday after having weighed-in only one fish Thursday.

"Yesterday I switched baits a lot to try to find something they would hit," said Schieber, who fished from pro Cindy Hill's boat on Friday. "Cindy said she knew where some fish were and she was right. There were fish all over her spot. I was throwing a Texas-rigged Baby Brush Hog on 10-pound test with a 1/4-ounce Tru-Tungsten weight. I was basically finesse fishing with the Brush Hog. The small weight was the key. I gave Cindy one of my weights and she started catching fish, too."

The 12 WBT pros return to Lake Mitchell Saturday for the final day of competition, which will determine the first Women's Bassmaster champion. The women will weigh-in at 3:15 p.m., during the pre-show of the Bassmaster Classic at the Birmingham-Jefferson Convention Complex.