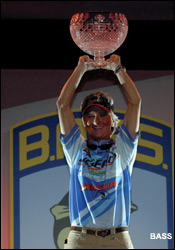 BIRMINGHAM, Ala.  There was no catching Pam Martin-Wells of Bainbridge, Ga., in the inaugural Women's Bassmaster Tour Championship as she capped a wire-to-wire victory Saturday with the largest limit of the three-day event.

Anchored by two big largemouth bass, Martin-Wells' five-fish limit weighed 15 pounds, 8 ounces Saturday on the Bassmaster Classic stage for a tournament total of 38-7, more than seven pounds heavier than the nearest competitor. Martin-Wells takes home a Triton/Mercury rig valued at $50,000 and $10,000 in cash with the win.

Although Martin-Wells headed into Saturday's finale with a 4 ½-pound lead, she refused to relax even after she had a limit of spotted bass in the livewell by mid-morning.

Instead, she went to her largemouth pattern of flipping grass to ensure none of the other 11 finalists could get close.

"I basically did the same thing all three days," Martin-Wells said. "The difference was that today after I got a limit of spots, the largemouths decided to bite. I didn't second guess my game plan. I just did it. 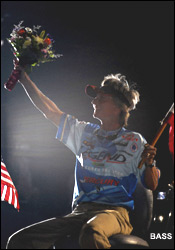 Martin-Wells fished various points with a Carolina rig to catch the Coosa River spotted bass. She used a Wave Worm Lizard, Tiki Stick and Zoom Baby Brush Hog. Martin-Wells flipped the grass with a Tiki Stick, Super Hog and jig with a 1-ounce Tru-Tungsten weight to get through the heavy cover.

When the field was set for the championship, Martin-Wells qualified in the 12th and final spot on the pro side.

"I qualified last, but from that point on I was on a mission to finish first in the championship," she said. "And it's hard to describe actually sitting in that boat for the ride around the arena. This is something nobody can take away. I will always be the first to win this championship."

"I've been doing this for 21 years, so I've seen the good, bad and the ugly. The Women's Bassmaster Tour is definitely the best. I knew when ESPN and BASS got involved this would give the ladies the recognition we deserve."

Sheri Glasgow of Muskogee, Okla., tried to make a run at Martin-Wells, but she knew it would require an exceptional day of fishing. Glasgow managed 12-14 to finish with 31-5.

"A four-pound lead is really hard to make up," Glasgow said. "But I also knew this lake is capable of producing a 20-pound bag. I caught a lot of nice fish on a Shaky Head, but I just had too much ground to make up."

Glasgow tipped the Shaky Head with a Zoom finesse worm in green pumpkin with a chartreuse tip.

"If you got it in front of one, it would hit it," Glasgow said. "I just didn't catch enough big ones."

Juanita Robinson of Highlands, Texas, also made a late run with the second-largest bag of the day at 12-15 for a 28-12 total. Robinson was hoping history would repeat after she came from behind to win the 2007 WBT season-opener on Lake Amistad.

"I knew I couldn't catch Pam unless she stumbled, but I was going to give her a run for her money. At Amistad, that's what happened. Seven stumbled and I jumped over all of them. This time, Pam didn?t stumble."

Weakened from a bout with pneumonia, Tammie Muse of North Little Rock, Ark., still managed to finish fourth at 25-12, while Linda Sands of Cullman, Ala., rounded out the top five with 25-5, which included a final-round catch of 9-14.