Each angler took home a fully rigged Triton/Mercury bass boat and $5,000 in scholarship money. A Walt Disney World experience will also be provided to the champions.

Anglers competed in two age divisions, 11-14 and 15-18. Two anglers, one from each division, fished from the same boat in the company of a Bassmaster Classic competitor. The Classic contenders will have their chance on Alabama's Lay Lake and a $500,000 top prize starting Friday.

But Sunday belonged to the JWBC contenders as they fished in one of the most prestigious events for youth anglers in the world. All earned the right to compete in the championship by fishing events on local and regional levels. 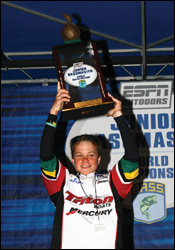 Toplis, who traveled to Alabama from Capetown, South Africa, to compete in the event, boated two bass by working a green-pumpkin jig. It was his first time fishing with the lure.

The near-freezing temperatures were a shock to Toplis' fishing style, but the 14-year-old managed to capitalize on two bites to weigh-in 7 pounds, 4 ounces, besting 43 other contenders in his division.

"You have to fish a little slower in the States," said Toplis, whose pro partner for the day was Classic contender Edwin Evers of Oklahoma. "And with the way the weather was today, I don't think we would have even gone fishing in South Africa. But I sure am glad we went out today."

Tippett, a 17-year-old from Hanson, Ky., brought in three fish that weighed 7 pounds, 8 ounces. He caught two on a spoon and one on a jerkbait, the first time he ever had boated a bass with the lure. 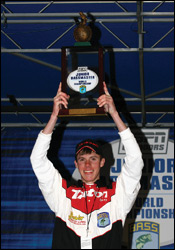 Tippett, who said he located fish during an outing on Logan Martin before the championship, said Sunday that his scouting trip was the key to his victory.

"It's awesome to be here, much less to win it," said the Kentucky winner, a member of the Bluegrass Junior Bassmasters. "I have been fishing since I learned to walk, and this is a huge accomplishment for me."

Tippett, who was accompanied in his boat by Classic contender Kelly Jordon of Texas, said that he hopes one day to be a pro angler on the Bassmaster Elite Series circuit, a dream shared by many youths who competed on Sunday.

The Junior World Bassmaster Championship showcases the top youth anglers in the world and provides youth anglers like Tippett and Toplis the opportunity to fish competitively under BASS- the most visible tournament structure in the world.