I guess the blame rests with my father, who introduced me to the sport when I was 5. Little did he know that letting me catch my first fish would ignite an obsession for the sport.

My insatiable devotion nearly wore out dad, and I never figured out who was happier when I turned 16 and began driving and fishing on my own  although I have a hunch!

North Biscayne Bay in Florida's northern Miami-Dade County is one of my favorite bodies of water. That's because I grew up fishing here, mainly between Julia Tuttle Causeway to the south and Haulover Inlet to the north.

North Bay has yielded a lot of good times, super catches and great memories. Although I now live more than an hour's drive north of Biscayne Bay, it's still a place I visit on occasion.

Unlike the tons of publicity South Biscayne Bay receives  primarily for the superb fishing for bonefish, permit and tarpon along its expansive network of shallow channels and flats  very little exposure is given to the bay's northern reaches. Credit that part of the equation to North Bay's heavily urbanized setting.

However, the numerous grass beds, canals, docks and bridges within North Bay abound with tarpon, snook, mangrove snapper and seatrout. Many people don't think great fishing exists near such a heavily populated area. Those who fish here, including myself, know better.

I vividly recall the enjoyable times I had catching seatrout with my family and friends over the years. So it was only natural that I introduced my daughters to the bay when they were young. 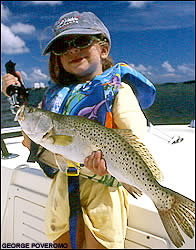 Lindsay, who turns 20 in February, and I spent many days on the bay when she was between 5 and 12. And Megan, who turned 9 in September, has been going with me since she was 5.

Recalling those fun times, and the enjoyment Lindsay and Megan always seem to get from the entire boating and fishing experience, I thought it would be neat to do one of my TV episodes on catching North Bay seatrout with my youngest daughter.

Megan Poveromo is student at Park Trails Elementary School in Parkland. She enjoys iceskating and hanging out with her friends, as well as boating, fishing and swimming in North Biscayne Bay. Megan has caught some impressive trout in the bay, with a 3½-pound fish her largest to date.

In this episode, I wanted to not only showcase the seatrout fishing within the bay, but how easy it is to get kids involved in fishing.

With the latter, it's important to remember to let the kids set the pace. That is, when they're tired of fishing, don't make them stick it out. Instead, take them for a boat ride and point out the water life and scenery along the way.

Parts of the coast, islands, river junctions and wetlands we tend to take for granted are of great interest to kids, especially if birds and other animals are present. It's an education in nature a schoolbook can seldom match.

Of course, to keep kids focused on the fishing, it sure helps to target a fish that can deliver plenty of action: Enter the seatrout.

The spotted seatrout inhabits the grassy flats and shallows of North Biscayne Bay. The larger ones tend to lurk along channel edges near these flats, in potholes and near docks, especially those docks that are lighted at night and attract bait.

Seatrout are aggressive predators that forage on a variety of small fishes and crustaceans.

They're a perfect fish to tempt on artificial lures, if you're looking for more of a challenge. But if you are looking for fast action, they are downright gluttons for frisky live baits, such as shrimp, pilchards and pinfish.

North Bay trout average 1 pound or less, with a 3-pounder raising eyebrows in extreme south Florida. However, what these fish lack in size, they more than compensate for in numbers. And that's a good thing when introducing children to fishing!

Our live-bait rigs consisted primarily of a 2/0 circle hook tied to three feet of 20-pound fluorocarbon leader. The leader, in turn, was tied to a float system. The 4-pound hybrid fishing line was tied to the other end of the float system. We employed rod and reel outfits that were small and light enough for Megan to fish with throughout the day.

To keep our each live shrimp kicking about, we ran the hook under its horn and just in front of its dark spot. Simple adjustments here include adding a split-shot weight to help keep the bait deep when the drift is fast, and raising or lowering the float to suspend the bait at different depths in an effort to locate trout.

Jerking the float yields a splashing, popping-type noise, which trout interpret as a feeding sound. When a fish strikes and pulls the float under, simply wind tight to the fish to set the circle hook. Circle hooks tend to latch in a corner of a fish's jaw, not deep inside them. Hence, they pose less harm to the fish and promote its safe return to the water.

As expected, Megan and I enjoyed a great trip on North Biscayne Bay, visiting some of Dad's old honey holes. We caught numerous trout north of 2 pounds, along with jacks, pinfish, snapper, lizardfish and even a blowfish. I marveled at Megan's enthusiasm for riding in the boat, catching fish and taking in the scenery.

Making a youngster feel like part of the team and not merely a passenger will go a long way toward nurturing their interest. Give them projects and request their help. Have them pack lunches and drinks, as well as sort out their tackle box. Even washing the boat is a big deal for Megan.

While we adults tend to equate washing the boat as the least desirable part of a fishing trip, it's all fun and games for kids  especially if they can drench themselves  and you  doing it.

Staring them young, instilling a value of the environment and letting them participate in your boating adventures are the surest ways to plant the sport in their heart.