OAKDALE, N.Y.  It's a little after 7 a.m. and I'm standing on the bank of the Connetquot River preparing to tie a fly onto my tippet.

Already I have witnessed and photographed a fellow upstream catching a colorful, fat 16-inch rainbow trout, barely minutes after fishing on this well-managed state park waterway has opened to anglers.

On the opposite bank, there's a fallen tree angled downstream that is partly deflecting the flow. The river is no more than 25 feet wide at this spot, and in the deeper water underneath the tree I can see several long sticks lying on the bottom.

But then one of the sticks moves slightly toward me and, looking more observantly now, I realize that this is a rainbow trout and that the other "sticks" are more trout. All right, I think, get that fly tied on.

If this were anywhere else I'd have been rushing to tie the knot and get casting.

But these fish aren't going anywhere and no one else is going to take a whack at them or mess up the water because this particular beat is mine alone for the next four hours.

All this is remarkable, considering Connetquot River State Park is smack in the middle of Long Island.

Soon a size No. 12 black woolly bugger, a perennial local favorite, is ready for action. I ease upriver a bit and start casting across and slightly downstream.

Shortly I hear raucous noise and look up to see two Canada geese coming right at me, hat high, so I raise my rod tip to force them more airborne. Then I realize that waving the rod has probably sent the fish scurrying.

Too good to be true, I think.

It turns out the trout did not like the woolly bugger or any of the other half-dozen offerings I tried. Then it occurred to me that the answer was a heavier fly-fished deeper in front of these fish.

Shortly after my epiphany, a muddler minnow took a chunky and brightly marked brook trout on its second drift.

Four hours later, with perhaps 20 fish to my credit, it was time to head to the car.

During the walk along a well-trodden bank, over a footbridge and along a bark-mulched trail, I thought about how pleasant and satisfying this experience was  and how remarkable that the fishing could be so good and so close to Manhattan. 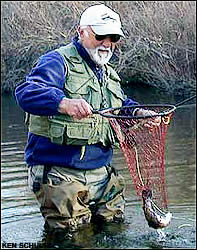 One would think that proximity to more than 17 million people in the New York metro area is not conducive to quality trout fishing. That's obviously not the case in this state park.

It's not a remote ranch stream in Montana that has native fish.

But the river is idyllic, just the same. The park grounds are loaded with deer, turkeys and waterfowl, and there are plenty of not-so-hard-to-catch fish to enjoy  perfect for beginning or moderately experienced flyanglers.

And some of the trout are monsters. I spied an enormous rainbow  maybe 12 to 15 pounds  in the off-limits area, and even bigger trout have been caught.

Gil Bergen, manager of Connetquot River State Park, has three decades of experience with the property

He said the largest rainbow that has been caught here was a 19½-pounder, and the largest brown trout was estimated at 17 pounds.

I cannot imagine tackling such brutes on a light flyrod, but some parts of the waterway are more open than others (there's a large pond you can fish), and the bigger fish tend to be tidal-water émigrés.

Sea-run rainbow, brown and brook trout move into the Connetquot River from nearby coastal waters.

The park has many interesting historical attributes, among them the fact it contains one of the oldest fish hatcheries in the United States, which is functioning today much as it did a century ago.

The hatchery supplies 80,000 trout annually throughout Long Island. The first hatchery constructed on the Connetquot was established in 1871 under the auspices of the Southside Sportsmen's Club of Long Island, which accumulated 3,473 acres by the time it sold the premises to the state in 1963.

It became a state park in 1973, and in 1978 was officially designated as New York's first state park preserve.

The name Connetquot, meaning "great river" is derived from the Secatogue tribe of American Indians, which made its home along the river.

The millpond here became the site of a tavern, which was a stagecoach stop for eastbound travelers and a gathering spot for wealthy sportsmen, before the Southside Sportsmen's Club acquired it.

Many of the buildings are more than a century old. Included among them are the Main House, which was once a tavern and built in 1820, and the wheat- and corn-grinding gristmill, which was constructed around 1750 and operated until 1878.

I left the park thinking about all the people over more than two centuries who have enjoyed the property along the "great river" and the trout within its waters.