LEWISTON, N.Y.  You've heard that expression about throwing a party but no one came? Well, the big salmon threw a recent party here on the Niagara River, and no one was there to catch them.

Actually, four or five boats a day were fishing, but that's tantamount to no one. There will soon be 30 to 40 a day fishing the famous Devil's Hole, battling large salmon in swift swirling water, negotiating cabin-size whirlpools and avoiding bumping into other boats that are trying to control their drift in order to get just the right presentation.

"It isn't often that you come to a great fishing spot and enjoy the absolute best fishing it has to offer," said captain Frank Campbell, a veteran of 20 years on this river.

"Yeah," he said shaking his head. "Well, hardly anyone but us."

The reason so few were here is because it was a bit early for the main run of salmon to show up in this deep and turbulent river.

Regular visitors are tuned into fishing here later in the month and throughout October.

Normally, chinook, or king salmon, plus a few of their coho brethren, migrate up the Niagara en masse around the third week of September, with the run lasting until the end of October, to be followed by a steady stream of steelhead.

But here, in the second week of September, Lake Erie had turned over, sending torrents of cold water down the upper Niagara River, over the falls, and downstream. And that had brought a bunch of salmon in from Lake Ontario.

Campbell and I had launched his boat in Lewiston at 7:45 a.m. and were in place at the top of the hole upriver 10 minutes later. I was already dropping an egg-baited hook down to the bottom of the river as Campbell refreshed my understanding of what to do.

"You have to get to the bottom and keep it there, adjusting up or down as you feel the depth change," he said. "When you feel a fish take, just lift up."

At that exact moment I was lifting, having felt a strike.

"Like that!" said Campbell. "Wow, what did that take? All of 7 seconds? I didn't even get my bait in the water."

"What a way to get started," I answered, as the fish took off for the middle of the river.

Chinook salmon are known to be sluggish when their bodies have undergone much change during their time spent on an upriver spawning migration, after which they will die.

But the fresher they are  meaning recently arrived in the river  the less dark they are and the more energetic. And with the tremendous flow of water in the Niagara, fighting and landing one is a battle.

In fact, the thing I like so much about this fishing is the opportunity to set the hook into a solid fish, one that is much larger than usually encountered in freshwater.

On top of that is the opportunity to have to fight it in the powerful current, a task that requires some skill, luck, good boat maneuvering (to avoid whirlpools and turbulent water), a reel with a good drag, a stout rod, and unfailing line. 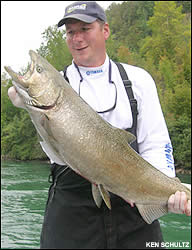 This fishing takes place in the gorgelike section of the lower Niagara, where monstrous power plants exist on both the American and Canadian sides of the river, generating electricity for much of the Northeast.

On the New York side, the Niagara-Mohawk power plant removes water from the river during the night, pumping massive amounts up the gorge and into a huge storage reservoir, then releases it while generating power in the morning.

Thus, around 9 each morning, the river flow picks up and the water rises, eventually by several feet. It stays up until the evening. The change in river flow and height affects where, and to some extent how, you fish.

Often the salmon action is very good in the early low-light hours before the river rises.

After boating my first fish, a stubborn-battling18-pounder, Campbell hooked a slightly smaller one. A little later I hooked a fish that obstinately took off upriver against the fast flow and we had to crank up the big outboard and go after it. The salmon turned out to be a bright 28-pounder, and the third of five fish that we had on in just the first hour of fishing.

We continued till lunch, went to the Niagara Bar (the spot 7 miles downstream where the river empties into Lake Ontario) to look for walleyes, then returned for a late 90 minutes of afternoon fishing.

In all, that produced 15 salmon from 15 to 28 pounds, plus at least eight more that were temporarily hooked and lost.

The line or leader broke on two of those, and one managed to get into the near-shore rocks and wrap me up.

It was a stellar day, however, and two friends who were fishing with us in another boat did similarly well, landing 17 salmon for 22 hookups.

Even though lots of salmon gather in the lower Niagara, catching them is not a gimme.

The favored tactic is controlled drifting, using a bow-mounted electric motor to maintain position and slow your drift down. If you don't use an electric motor, you get whisked downriver too quickly.

Trolling is possible, but not when there is any number of boats. The charter guides here all use remote-controlled electrics and have made boat control an art form; they do not look too kindly on newcomers who are floundering around and messing up their drifts.

This is tied to a three-way swivel, with a heavy pencil-shaped sinker on a 12- to 18-inch dropper line and a 6-foot fluorocarbon leader that is lighter than the main line.

Campbell uses snelled Mustad salmon hooks, which are baited with a chunk of cured eggs. Hook sizes vary, with size Nos. 1 and 1/0 popular.

Campbell and the other guides snell their own hooks and have leaders pre-rigged for the inevitable break-offs. They also cure their own eggs (salmon eggs are a precious commodity here), although cured eggs can be purchased at a local tackle shop. Sinker size runs from 1¾ to 2½ ounces.

With your hardware bouncing along the bottom, you're in the salmon zone, and now you have to be able to differentiate a strike from a rock bump.

Why the salmon strike  since they do not feed on their upstream spawning migration  remains a mystery. But occasionally they do open their mouths for a wad of orange or red eggs.

And when you detect that and raise the rod up, the fish is off into the swirling water, peeling line off the reel, and you're holding on for all you're worth.