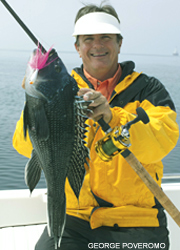 The black sea bass, while not likely to win a piscatorial beauty contest, is an extremely popular bottom fish, especially between South Carolina and Massachusetts.

The reasons? Black sea bass are accessible to many fishermen, because they frequent nearshore wrecks, reefs, rock piles, shell beds and various other structures.

They're usually around in good numbers, when you do locate them. They fight very well on light tackle. And they're delicious to eat.

To catch a single five-pound class black sea bass in a season would truly be outstanding. To catch a few of them in that size class in a single day would be totally off the charts.

Yet that's exactly the kind of day Tom Richardson and I enjoyed this past June on Buzzard's Bay.

Richardson lives and fishes on the southeast coast of Massachusetts. A former managing editor with Salt Water Sportsman magazine, he currently serves as the editor of Offshore magazine, a Northeast boating publication covering the waters from New Jersey to Maine.

Early summer triggers a world class run of black sea bass in Buzzards Bay, as the fish gather here to spawn. These fish are not only plentiful, but  when they're not in the mood for love  extremely hungry. What's more, they're really big!

Tom took me on a short run to the sea bass grounds off Cleveland Ledge Light and stopped over a big area of hard bottom with scattered boulders in 30 to 40 feet of water. We were ready to try our luck at jigging up a few of these trophy humpbacks.

We used a three foot long, 30-pound test Sufix InvisiLine Fluorocarbon leader, joining it to the braid line with a size 7 (75-pound test) SPRO Power Swivel. We both used 3-ounce SPRO Bucktails in chartreuse and pink shad colors, and a nonslip mono loop knot to tie them to the leader.

To make the bucktails appear like a squid or small baitfish, we lowered them to the bottom and then danced them a few feet on and off the ocean floor. The squid strips not only provided each jig with a "fluttering" action, but they also emitted scent, a big advantage when targeting black sea bass.

Since we were fishing between 30 and 50 feet of water, the diminutive diameter of the braid line sliced through the water column with nearly no resistance and helped to keep our bucktails directly beneath the boat.

The braid's sensitivity enabled us to feel even the slightest contact with bottom or subtlest fish strike. Equally important were the braid's no stretch properties, which promoted quick and efficient hook sets in that deep water.

Richardson scored first, reeling up a beautiful sea bass pushing five pounds, which he promptly released. He caught two more fish nearly back-to-back, prompting me to wonder what he was doing differently, or if the chartreuse color was making that much of a difference.

I almost subscribed to the color theory; That is, until my rod took a deep bend. I hooked a tough fish, and it was putting up quite a struggle. It felt like a big sea bass, which was confirmed minutes later when Tom scooped it up into his landing net. I had my first trophy class black sea bass! It weighed five pounds.

Black sea bass are bottom-dwelling, structure-oriented fish that range from Maine to the Gulf of Mexico. Despite their relatively small size, they are determined fighters and lots of fun on light tackle.

Black sea bass are hermaphrodites, which means most begin their lives as females before changing to males. Often brilliantly colored, especially during the spawn, the larger male fish are commonly called "humpbacks" because of the pronounced lump on their foreheads.

By comparison, little or no water movement shuts the fish down. Therefore, a good tide flow is essential for catching black sea bass.

When fishing deep water, like Tom and I were doing, it helps to fish the late or early stages of a tide, when there's moderate water movement. 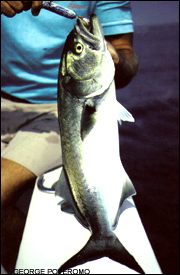 During these stages, you can effectively reach bottom and thoroughly work an area using lighter jigs and tackle. Fishing during the peak of a strong tide makes it difficult to reach and hold bottom without using heavy lures or weights.

ANOTHER TROPHY FOR THE COLLECTION

Tom and I were fishing during the last two hours of a falling tide, and racking up the sea bass. I continued jigging and felt a subtle "thump", prompting me to set the hook.

By the way this fish was fighting, I could tell it was larger than any we had previously caught. Even on the fairly heavy baitcasting gear, this fish fought surprisingly well.

Once again, Tom slipped the net under a beauty of a fish; This black sea bass weighed six pounds on our Boga Grip scale!

After jigging up several more black sea bass, our tide ran out. We decided to move to a nearby cove where the bluefishing had been solid in recent days. With the tide starting to flood, we racked our jigging sticks and switched over to a pair of eight-pound class spinning outfits.

The drill here was to fan cast topwater plugs along the shoreline and dance them back to the boat with a rapid retrieve.

As expected, Tom uncovered the fish and set us up for some highly visual light tackle action.

We tied a short Bimini twist in the fishing line, then used a Bristol knot to join the line to three feet of 30-pound test Sufix InvisiLine Fluorocarbon leader. To coax the bluefish into striking at the surface, we used Yo-Zuri Banana Boat topwater lures.

Bluefish are an important recreational species for New England anglers.

They often travel in large schools close to shore and will hit a wide variety of baits and lures.

When the bite's on, they'll devour virtually anything in their path. Few game fish in this region can match their aggressiveness and pound-for-pound fighting ability.

To hook more bluefish on topwater lures, avoid metallic leaders  no matter how light. Bluefish have keen eyesight and will ignore wire leaders. Fluorocarbon is the way to go.

However, be aware that you may lose a few lures and fish with a non-metallic leader. Yet, that's a small price to pay to keep the hits coming.

To make it safe and easy when releasing bluefish, pinch down the barbs on all hooks. By doing so, the hooks will be easier to set in a fish with light tackle, and slide right out when it's time to release your catch.

My trip back to New England was another memorable one.

This was the first time that I specifically targeted trophy black sea bass  and I ended up catching two monsters!

Then it was back to something I always enjoy doing on my trips up north  chasing bluefish on topwater lures. It was action aplenty, all while spending time with Tom Richardson  a good friend, fisherman, and fellow editor.