Harry Lemire is fly-fishing's version of the Latin scholar, a singular crusader who keeps alive one dead and forgotten dialect in the language of fly-tying.

The 68-year-old Washingtonian quite literally holds an enormous piece of fly-tying history between his left thumb and index finger every time he ties a fly.

Lemire is the country's only known master fly-tyer who does it the Renaissance-era way by creating intricate Atlantic salmon flies without the main creature comfort of fly-fishing's Industrial Age  the fly vise.

"In-Hand Harry" holds the hook in his left hand and lashes the feathers, thread and other materials to the hook with his right hand.

Those who see Lemire in action often wonder just how he does it, let alone does it as well as two-handed tyers who labor for hours over a hook secured safely to a vise.

The question they invariably ask him, though, isn't how, but why?

"I ask myself the same question," Lemire laughs, "when I see those guys climbing up the side of a mountain with just a rope. What would you want to do that for?"

In a sport that is considered the high-brow side of angling, Lemire is a fly-tying traditionalist in the purest sense of the word.

"I like cane rods, silk lines and wooden reels," Lemire says, nursing a glass of wine during a recent visit to Oregon's Rogue River for some steelhead fly-fishing. "I'm very traditionally minded and like bringing back something that's more or less forgotten," he says.

And making this leap to the past has made Lemire  already famous as a pioneer of the Northwest's steelhead fly-fishers  an iconoclast of what passes as today's conventional tying wisdom.

"This tying in hand has really brought his name forward," says Dave Roberts, an Eagle Point, Ore., fly-caster and tyer who shares some of Lemire's purist views. "He's known from Nova Scotia to Russia to Alaska.

"He's taking an old art form and keeping the history alive, the tradition alive," Roberts says. "And it's incredibly neat to watch."

Lemire's path down a road no longer traveled began a decade ago when his wife, Marlene, bought him T.E. Price-Tannett's classic 19th century fly-tying book, "How to Dress Atlantic Salmon Flies."

The book centered around tying "in hand," because the vise was not yet invented, Lemire says.

"I thought that was pretty slick," Lemire says. 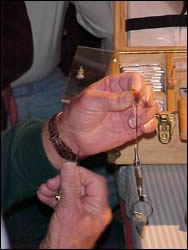 Before that, Lemire was like many of his hard-core cohorts in that he occasionally repaired a fly while holding it in one hand and standing in a stream.

For six years, he practiced holding the hook in his left hand while layering on the various feathers and threads to create the multi-dimensional Atlantic salmon flies.

While feeling attached to history with each new in-hand fly, Lemire also sensed how progress has made hand-tying easier now than when it was common in the 1800s.

Tying materials are better, sturdier and far more available than they were for his historical peers.

"I have a much better advantage than they did," Lemire says. "I have good bifocal glasses and better light. They used to tie in sunlight, during the day."

A typical Atlantic salmon fly takes him about four hours to create, usually in a pair of two-hour sessions. Most of the work is preparing and laying out the various materials, then fastening them in order.

He will put the fly down occasionally to rest his aging fingers.

By 1997, he felt accomplished enough in his in-hand tying ability that he resurrected the art during a fly-tying show in Seattle's Kingdome.

Tyers huddled in awe as they watched history reinvented on the Kingdome's 30-yard line.

"Since then, I guess I've been something of a curiosity," Lemire says. "Now, I'm the crazy guy who ties flies in his fingers, and that's OK."

Lemire has since tied in more than a dozen large venues, including April's large Federation of Fly Fishers tying symposium in Eugene.

His flies are art  excellent representations of the traditional Atlantic salmon patterns that adorn the walls of dens and museums worldwide.

And his flies stand alone, without comparison. There still are no others identified who are tying such flies in-hand anywhere in the country.

"Really, there's nothing around now to compare them to," Lemire says.

He continues to travel the country, talking up the virtues of the in-hand fly and hoping to get the art reborn.

Until then, his old, bony fingers will continue to hold and spin history for the most traditional of the traditionalists.