When the hunter becomes the game

A 300-pound black bear attacked and seriously injured a hunter near Forks, Wash., on Saturday before his partner was able to shoot and kill the bruin.

The incident occurred just outside Olympic National Park, according to the Washington State Patrol's office in Bremerton. The two were hunting under a special permit issued by the U.S. Fish and Wildlife Service to the landowner.

It's spring, that time of year when the plaster figurines and pink flamingoes come out of hibernation and return to their rightful place in flower gardens and front yards throughout Middle America.

But in Oakland County, Michigan, one homeowner's idea of a lawn ornament bucks the trend, so to speak.

About a month ago, Thomas Thompson placed a mounted deer head on a post at the end of his driveway, and now some of his neighbors have asked township officials to demand its removal.

The township supervisor said he can't force Thompson to take down the mount, despite the fact that one neighbor claims the buck scares her children.

"It's gross," local resident Connie Newberg told the Flint Journal. "The first time I saw it, I thought 'how disgusting.' I'm not against hunting, but it's inappropriate to have that right there."

Obviously, the folks who believe a deer head in a yard is disgusting and scary have not had the privilege of viewing my porch gnomes. FORUM | MAILBAG

Students attending a hunter-education class last week in the community room of the Livingston, Mont., library received a firearms-safety lesson they probably will never forget, after the instructor accidentally discharged a shotgun into the ceiling.

Montana Department of Fish, Wildlife and Parks instructor John Lundberg was demonstrating how someone could accidentally load the wrong ammunition into a firearm in front of about 50 students Wednesday when the accident occurred.

He loaded a 20-gauge shotgun with a live 28-gauge shell, and the gun was accidentally discharged.

Frost said the accidental blast is "something that will stay with those students for a long time. I know I will never forget it." FORUM | MAILBAG

The buzz: Shark on the fly

The flyangling community is abuzz over the recent catch and release of a 385-pound lemon shark by Dr. Martin Arostegui.

The retired Coral Gables, Fla., physician is well known for his fishing feats and holds more than 150 world records. But this latest catch, on 16-pound tippet, is in line to top them all.

If the record application for his March 7 catch off Key West, Fla., is accepted by the International Game Fish Association, it would mark
the heaviest fish ever recorded with
a flyrod.

The previous record catch on a fly was a 353-pound hammerhead shark caught in 2004, also near Key West.

Think you're pretty smart when it comes to sharks? Take our Shark Quiz. And be sure to tune in to the mad conclustion of the "Mad Fin Shark Series" this weekend on ESPN2.

The Ozarks region of Missouri and Arkansas is well known for its scenic beauty, outdoor recreation and great fishing. In addition, it's a fair conclusion that more bass-fishing boats are produced here than anywhere else on the planet.

On Wednesday, Curtis Karlen of Fort Collins, Colo., was in northwest Arkansas with his newly refurbished 21-foot bass boat and 225-horsepower engine. According to an article in the Baxter Bulletin, Karlen decided to try some fishing on Bull Shoals Lake that evening and used the opportunity to take his boat for a test spin.

The Marion County Sheriff's Department reports that Karlen evidently became disoriented on the lake after dark and ran his boat aground, seriously damaging its hull and engine.

After a long night, Karlen loaded his wrecked boat onto its trailer and headed down the road, where he unfortunately hit a deer, caving in the door on his sport-utility vehicle. Once again, Marion County's finest were there to fill out another report.

Memo to Curtis: If you expected to go turkey hunting in Arkansas this weekend, make other plans.

Wal-Mart decision: What does it mean?

Wal-Mart, the nation's largest single retailer of firearms, announced last week that it plans to discontinue gun sales in one-third of its U.S. stores, or about 1,000 locations.

A spokesperson for the retailer said the move was strictly a marketing decision. As one would expect, however, there has been a lot of speculation that the move signifies something more ominous.

Anti-gun organizations were quick to pounce on the Wal-Mart decision, claiming it reflects a growing decline in gun purchases and firearms ownership. However,
industry trends generally prove otherwise.

Interestingly, John Lott, gun-ownership advocate and author of the books "More Guns, Less Crime," and "The Bias Against Guns," writes on his Weblog that Wal-Mart's action "will have a major impact on the gun industry." Further, Lott writes that the move might not have occurred "if Wal-Mart heir John Walton hadn't died last year."

I'm no economist, but it seems to me that Wal-Mart didn't get to this point by making bad business decisions. Would its floor space in some of its more urban stores be put to a more profitable use with electronics and DVDs instead of 20-gauge shotguns? Probably.

In addition, I would suspect that the major expansion of big-box outdoor retailers like Bass Pro Shops, Cabela's and Gander Mountain has impacted gun sales at nearby Wal-Marts to a noticeable degree.

"While from a customer perspective we don't like to see a reduction in the number of retail outlets for our industry's products, the Wal-Mart decision to eliminate firearm sales in some locations may open the door for increased sales among independent retailers and outdoor 'superstores,'" said Doug Painter, National Shooting Sports Foundation president.

One of my favorite gun writers (and bloggers), Field and Stream magazine's David Petzal, also sees the decision as market-based, and little else.

"I think it means that Wal-Mart is obeying one of the inexorable laws of commerce, which states that you carry in your stores those items that sell best, and if people would rather buy jockstraps than firearms, why, clear the shelves for all the new athletic supporters." FORUM | MAILBAG

Spear near in Pennsylvania?

Under pressure from some hunters and anti-hunters alike, the Pennsylvania Game Commission board has delayed its vote to approve the use of an ancient spear-throwing weapon for deer hunting, and has referred the issue back to its law-enforcement committee.

In January, against the recommendations of its staff, the commission nonetheless unanimously supported use of the primitive atlatl for the state's deer hunt.

A staff opinion read prior to that vote stated, "the staff is not convinced (that an atlatl) in the hands of the average hunter, possesses sufficient lethality to ethically and humanely harvest a deer in Pennsylvania."

The commission announced in November it was acting on a request to draft proposed regulations that would permit deer hunters to use the small, wooden launching device that propels a 6-foot spear. The leverage of the atlatl is said to allow users to throw the projectiles much faster and at a much greater distance than one could throw a spear without it.

Currently, only Alabama allows the atlatl for deer hunting, while a handful of other states list the device as legal for rough fish (those not sought for sport or food), some game birds and non-game mammals.

Allan Andress, chief fish and game enforcement officer for the Alabama Department of Conservation and Natural Resources, said that few hunters opt for the weapon for deer hunting. In fact, there are so few atlatl hunters in Alabama that spearhunters (state game law also allows spears) outnumber those using the spear-tossing tool.
FORUM | MAILBAG

Hunting for a college?

Spring may be in the air at the University of Wisconsin-Green Bay this week, but so are carbon arrows tipped with razor-sharp broadheads, as campus bowhunters aim to reduce the growing deer population on the 700-acre facility that offers scenic views of its namesake bay.

Bowhunters who qualify for an existing urban deer-hunting program in Green Bay and Brown County began hunting Saturday and will have until the end of the month to cull as many deer as possible from a herd estimated at 50. 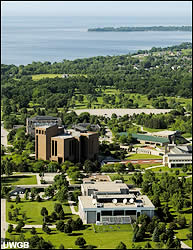 As in other city archery-hunting programs cropping up around the country, the UW-Green Bay program requires bowhunters to adhere to certain parameters, like hunting from treestands, shooting downward and staying at least 100 yards away from certain trails.

University authorities said the hunt was implemented as a growing whitetail population increasingly chews away at the campus bushes and flowers, contributes to vehicular accidents and raises the risk of Lyme disease.

The volunteer bowhunters, all of whom have passed shooting proficiency tests, will be allowed to keep one deer; additional venison will be donated to a local food pantry.

Speaking of hunting and institutes of higher learning, ESPNOutdoors.com's top-5 colleges ranks the best that combine education with deer hunting.