"I talk to people all the time who think I'm lying when I say the fishing's this good."

Capt. Chris Cinelli was helping two of his customers land a duo of smallmouth bass as he said this, both in the 3 1/2-pound class. They were fishing along a seawall at the far eastern end of Lake Erie, Buffalo's tallest buildings in the near background.

"Tell me about it," said my fishing partner, Mark Davis. "Last year I was here this same week in May and we smoked 4- and 5-pounders for three days, but no one believed me.

Indeed, on this day Davis had caught two bass in the 5-pound range, and Cinelli's three anglers had caught and released over a hundred bass, with the average size being a remarkable 2-1/2 to 3 pounds. Some of their fish were in the high 4- and low 5-pound range as well.

This catch occurred at the beginning of the New York special bass season in May, and if it sounds too good to be true, then so will the statement that good fishing, and, indeed, big smallmouths, can be caught all season long, even in summer and into the fall.

"There's no best time here," said Capt. Frank Campbell, who has been guiding fulltime on Lake Erie and the lower Niagara River for over a dozen years. "It used to be that fishing for big smallmouths fell off after the early season, and you went begging for them later when they moved to deeper water after suspended baitfish. In the past I could not say that you stood much chance of catching a 4-pounder in July or August, much less a 5-pounder. But the bass stay around now and I can say that even in the summer you could see a 5-pounder."

Moreover, there's quantity to be had as well. "Over the years we used to average 35 to 40 bass per guide trip," added Cinelli. "Now we average 75 per day." 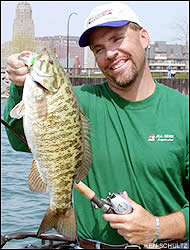 The primary reason why smallmouths are large, plentiful, and stay around, is that they're feasting on round goby. A bottom-dwelling fish that hitchhiked its way to the Great Lakes from Eurasia, the invasive round goby now comprises roughly 80 percent of the diet of smallmouth bass, according to Campbell, displacing the formerly favored crayfish and minnows. In fact, gobies, which are commonly found 3- to 6-inches long (but do grow to 10 inches), eat small crayfish and minnows themselves. The once locally favored smallmouth bait, softshell crayfish, can't even be used anymore because gobies are so attracted to them.

Not only have gobies become the favored food of smallmouths, they have also impacted seasonal results. "Now with the goby here," said Campbell, "fish stay around. It used to be that you had to go to much deeper water in the summer to find smallmouths that were after suspended baitfish. And there's no best time anymore on eastern Erie for big bass. It's good from May till fall."

Smallmouths move inshore in May prior to spawning, and, although Campbell says there is no best time, early May is when bass are concentrated in certain areas and uniformly large in size. During the first week of May this season, three friends of mine fished an entire day along the outside of harbor seawalls and caught well over a hundred smallmouths, with the average size being more than 3 pounds, many of them being 4- and 5-pounders. Really. They were delirious.

All of their bass were caught in 18 to 30 feet of water, and, at times, if conditions were right, they could see bass on the bottom in 20 feet of water. The following day, one bass fisherman caught thirty smallmouths himself that were over 4 pounds, with the largest being a 7-plus-pounder.

For the last two decades, Lake Erie has been known for its great walleye fishery. And, in the central basin, the Bass Islands of Ohio have long been a smallmouth destination. But recently, the eastern basin has not only become known for a tremendous smallmouth fishery, but as probably the best place in the nation to find a large smallmouth. And much of this takes place within the shadows of Buffalo.

Lake Erie is the second smallest of the five Great Lakes, and the shallowest, with an average depth over its 9,900 surface acres of only 62 feet. In the eastern basin, bass fishing takes place early in the season close to shore, as mentioned. While this is generally for pre-spawn bass (with a special season in New York that permits fishing in May and early June), not all of the bass spawn at the same time, so you can catch smallmouth into July in shallow or mid-depth waters in various stages of pre-spawn, spawn, and post-spawn attitude. Later, the action occurs out in the basin away from shore, and on reefs and hard-rock-bottom humps which may have only a rise of 3 to 4 feet.

Local guides and anglers have these spots locked into GPS units to help re-locate them. Live minnows, fished off a three-way rig, are very effective. Artificial lures are likewise popular, with tube jigs leading the way; Campbell and Cinelli favor dark-colored soft tubes, with brown, green, and a hint of purple in them, to mimic the look of gobies.

Fishing is significantly better when there's a chop on the surface to provide wave action. Erie can get very rough, often meaning that it's no place for a small boat, so good judgment is mandatory. The amazing clarity of the water, a phenomenon throughout the Great Lakes thanks to the proficient filter feeding of another exotic species, zebra mussels, makes it necessary to cast farther and work generally deeper than in the past, use smaller lures and bait for shallow water and early in the season, and fish with fluorocarbon leaders. Fishing on the bottom for smallmouths is a given most of the time.

Walleye call the eastern basin of Lake Erie home, too, and where lure-trolling in open water for suspended fish was the most common walleye method in the recent past, now there's more fishing with worm harnesses and spinner-and-worm rigs, using three-way swivels to probe the bottom. This is especially so near the head of the upper Niagara River. There's also largemouth bass here, generally around the seawalls and harbors. Muskies, which inhabit the upper Niagara River in trophy sizes are sometimes also caught at the eastern end of the lake, as well as in the upper Niagara River, which flows out of Erie and toward Niagara Falls. Campbell trolls for these fish in October and November using a three-way rig and a live sucker chub.

But don't expect to catch muskies the way you do smallmouths. Of course, many bass anglers who experience the numbers and size of smallmouth that eastern Lake Erie holds cannot imagine wasting time fishing for anything else.

The smallmouth bass is the second largest member of the Centrarchidae family of sunfishes. To anglers it is one of the most impressive of all freshwater fish and is coveted for its fighting ability. It is less tolerant of very warm environs and is not as widely distributed as its close relative, the largemouth bass.

Identification. The smallmouth bass has a robust, slightly laterally compressed and elongate body, a protruding lower jaw, red eyes, and a broad and slightly forked tail. Its pelvic fins sit forward on the body below the pectoral fins; a single spine is found on each pelvic fin and the front of the anal fin. The two dorsal fins are joined or notched; the front one is spiny and the second one has 1 spine followed by soft rays. Its color varies from brown, golden brown, and olive to green on the back, becoming lighter to golden on the sides and white on the belly. Young fish have more distinct vertical bars or rows of spots on their sides and the caudal or tail fin is orange at the base followed by black and then white outer edges.

Size/Age. The average lifespan of the smallmouth bass is 5 to 6 years, although it can live to 15 years. Most smallmouths encountered by anglers are about 1 to 1.5 pounds in size and from 9 to 13 inches long, and fish over 3 pounds are considered fairly large but not uncommon. The largest smallmouth known, and the presumed maximum weight, is the Tennessee state record, a fish that weighed 11 pounds 15 ounces when caught from Dale Hollow Lake in 1955. It measured 27 inches long and 21.7 inches in girth.

Distribution. The smallmouth bass is endemic only to North America, and its original range was from the Great Lakes and St. Lawrence River drainages in Canada south to northern Georgia, west to eastern Oklahoma, and north to Minnesota. It has since been widely spread within and beyond that range, across southern Canada west to British Columbia and east to the Maritimes, west to the Pacific Coast states, and into the southwestern U.S. It has also been introduced to Hawaii, Asia, Europe, and Africa.

Habitat. Smallmouth bass prefer clear, quiet waters with gravel, rubble, or rocky bottoms. They live in mid-sized, gentle streams that have deep pools and abundant shade, or in fairly deep, clear lakes and reservoirs with rocky shoals. Although they are fairly adaptable, they are seldom found in murky water, and avoid swift current.

Life History/Behavior. Smallmouth bass spawn when the water temperature is between 60 and 65 degrees Fahrenheit. The male builds a nest in water that ranges from 1 to 12 feet deep depending on the environment. Older bass prefer rocky, shallow areas of lakes and rivers and retreat to deeper water during high water temperature periods. They tend to seek cover and avoid the light, and generally do not inhabit the same types of dense weedy or wooded cover that largemouth bass prefer. They hide in deep water, behind rocks and boulders, and around underwater debris and crevices, preferring water from 66 to 72 degrees.

Food. These highly carnivorous and predatory fish will eat whatever is available, but have a clear preference for crayfish and small fish. In lakes this includes small bass, panfish, perch, and assorted fingerling-size minnows. In rivers, it includes minnows, crayfish, hellgrammites, nymph larvae, and leeches.