I never thought I'd go to prison for fishing, but I did.

On May 8, 1989, I was processed for entry into the Louisiana State Penitentiary at Angola, a prison known during the late 1960s as the "bloodiest prison in the South," due to the number of inmate assaults.

"Lean against the wall and spread your legs," said one of the heavily armed guards who patted me down. Another guard lay on a mechanic's creeper and pulled himself beneath my truck to search for contraband. Two others were doing a thorough search of everything inside and outside the vehicle. Everything was scrutinized.

Three friends  Lewis Peeler, W.T. Moore and Curt Moore  also were being processed. I will never forget the looks on their faces as the guards searched them. They looked like condemned men.

"Sir, you'll have to leave this here," one guard said, holding up my camera and film.

"I have Warden Butler's permission to take it inside," I replied.

Quickly, he dialed a phone. "Give me Warden Butler," he said.

A moment of silence passed, then he spoke. "Yes, sir. Yes, sir. I understand."

The guard turned to me, a stern look on his face. "You can take the camera," he said, "but Warden Butler said to remind you the photos you take aren't for publication."

"The four of you can go then," he said. "Park beside the lake, and be sure to lock everything and take the keys with you. And, remember, you must leave the prison no later than 5 p.m. If you don't show up on time, you could find yourself here longer than you expected."

As he said that, he smiled for the first time.

Thirty minutes later, we were fishing on the prison lake.

A fellow outdoor writer in the Bayou State was the first to tell me about the incredible fishing on Angola's Lake Killarney.

He shared the tip when I mentioned to him that my three friends and I had planned a crappie-fishing trip that would take us to several Mississippi River oxbow lakes in eastern Louisiana. 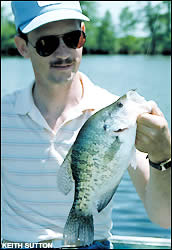 These lakes serve up some of the finest angling for big "sac-a-lait" in the world, and we intended to spend a full week fishing one oxbow one day and another the next until we made our way from Lake Bruin on the north to False River Lake on the south.

"If you like, I can get you permission to fish the best crappie lake in the world," the writer told me. "This is the only lake where I've ever seen an honest-to-god 5-pound crappie, and there are tons of 2- to 3-pounders.

"You won't be able to do a story about your trip, though. The folks who control access to the lake don't want anyone knowing about the great fishing there, and you have to have connections to get in. Are you interested?"

"Then I'll talk to the warden and see if I can get you in," he said.

"Warden? Is the lake on a prison or something?" I asked.

"That's right," he said. "It's on the grounds at Angola, the largest maximum security prison in the United States. That's why you need connections to get in."

"Getting in is not what worries me then," I told him. "If I go, I just want to be sure you've got connections to get me back out."

A week later, Angola warden Hilton Butler called me to discuss my visit.

"Lake Killarney is an old oxbow of the Mississippi River," he said, "and because we control access to it and only a few people ever fish there, the crappie grow really big.

"I like to think of it as my lake, and I wouldn't want some nosy writer in here thinking he's going to tell the whole world about the great fishing on Angola prison. So if you want to fish here, you have to assure me you'll never write an article about fishing here as long as I'm the warden."

"I assure you I won't write any articles," I said. "But I would like to photograph any big crappie I catch. Would that be OK?" 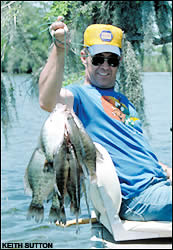 "I don't suppose that would hurt," he said. "But don't be taking photos of anything else on the prison grounds. Only fish."

He explained the other rules, as well. I could bring three friends, and we could use two boats.

Fishing was allowed from 8 a.m. to 5 p.m. and we'd have to be processed at the prison gate before we could enter.

We couldn't possess anything but fishing gear while on the grounds, and we could travel only to and from Lake Killarney. All other parts of the prison were off-limits.

Several things about Angola stand out in my mind. I remember seeing gun-toting guards on horseback watching inmates hoeing weeds in the perfect rows of cotton, corn and other crops.

I remember how incredibly beautiful and clean the prison grounds were  at least the part we were permitted to see.

The complex of immaculate cellblocks and dormitories is surrounded by 18,000 acres of farm fields and perfectly manicured lawns. Even the razor wire lining the miles of fences looked like it had been hand polished.

Some ugly truths were hidden behind that beautiful façade:

Angola houses more than 5,000 inmates. The average sentence is said to be 88 years. According to officials, 90 percent of those inmates will die there. Angola has more prisoners who will never be released than any other prison in America.

Some call it the Alcatraz of the South. Others call it "The Farm," a title also given to a celebrated 1998 documentary about the prison.

Reforms have brought changes for the better, but during much of Angola's more than 100-year history, life was woven by the thread of violence.

The only law was that of the knife, and the only protection available to prisoners was what they could acquire through sheer force of character and the ability to impose their will upon others.

As prisoner Wilbert Rideau wrote, "The pursuit of survival fueled a heated arms race among the prisoners for the superior weapon: a sword over a knife, a broad ax over a sword and a gun over everything.  The knife claimed the lives of 40 prisoners between 1972 and 1975 and left 350 more seriously injured."

While fishing beneath cypress trees draped in Spanish moss on scenic Lake Killarney, we did not talk about these things. Instead, we focused on fishing.

The crappie angling was as excellent as we had been told, and a jig dropped near good cover might produce one or a dozen slabs. We did not catch the fabled 5-pounder, or even a 3-pounder, but during two days there, we caught almost 50 crappie in the 2-pound class.

We returned in 1990 and fished Killarney once more.

But a new warden was coming on board, we were told, and he had decided not to allow outside anglers to fish the prison lake after our visit.

Supposedly, a prisoner had hotwired one of the fishermen's vehicles after our previous Angola trip and tried to drive it through the front gate and escape.

That makes a good story. And if I were the warden of Angola and this could be my lake, I suppose I'd use it, too. I have never fished a better crappie lake, and the memories of the few days I spent there will forever be etched upon my mind.

My experience fishing on Lake Killarney was so unusual and "out there," I have long felt compelled to tell about it. Because Hilton Butler no longer is warden there, I feel I lived up to my promise to him not to write about the lake while he was in charge there.