Editor's note: Watch for Keith "Catfish" Sutton appearing on "The Casting Couch," a one-minute commentary on the wild world of fishing that airs on Saturdays during "BassCenter" on ESPN2.

For more than 40 years I've been hunting and fishing in the Big Woods. Before the ivory-bill, however, we never called them the Big Woods. 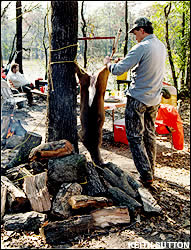 I suppose it's as good a name as any for the 550,000 acres of floodplain forests lining the Mississippi, White, Arkansas and Cache rivers in eastern Arkansas.

After all, this is a big place with lots of woods and, as many students of literature can tell you, Big Woods was the name used by writer William Faulkner to describe the portion of this once-vast area he hunted in Mississippi.

Before the ivory-bill, however, we never called them the Big Woods. The name just seemed redundant.

The ivory-bill, as I'm sure you know, is an ivory-billed woodpecker  a bird most folks thought was extinct.

To most, these swamplands had no value, and their destruction held no significance. Sportsmen, however, recognized the importance of this river-floodplain ecosystem; and in the early part of the 20th century, they were at the forefront of efforts to protect what remained.

It was at the urging of hunters that the federal government purchased 113,000 acres along the lower White River in 1935 and, thus, White River National Wildlife Refuge was established. Money raised by the sale of Federal Duck Stamps paid for this acquisition.

Revenue from hunting and fishing license sales, as well as from taxes on sporting arms, ammunition and fishing tackle, were the sole means of funding for the Arkansas Game & Fish Commission in 1952. That's when the agency purchased 5,265 acres of bottomland hardwoods between Cache River and Bayou de View, which later became Dagmar Wildlife Management Area. 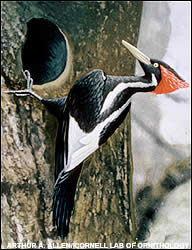 The same was true in 1958 and 1959, when Hurricane Lake and Wattensaw Wildlife Management Areas were established, thus protecting an additional 32,800 acres of the Big Woods.

And since 1986, when Cache River National Wildlife Refuge was established, three of every four acres of refuge land acquired have been purchased with revenue from the sale of Federal Duck Stamps.

After the ivory-bill sighting, some folks seem to have forgotten the sportsman's role in protecting the Big Woods.

For example, after reading a recent article about the ivory-bill's discovery in Nature Conservancy Magazine, one might have gotten the impression that sportsmen played no role in this at all, for the author fails to mention this important fact.

The same is true elsewhere; credit is not given where credit is due. And though I have supported the many conservation organizations working with sportsmen to protect the Big Woods, I am incensed by the fact that some claim far too much credit for being the ivory-bill's beneficiaries.

Had hunters, fishermen and the agencies their dollars fund not purchased the majority of the lands now part of the Big Woods, it is likely the Big Woods would not exist  and neither would the ivory-bill.

On a recent visit to Dagmar Wildlife Management Area, I visited with bird-watchers from Texas, Virginia and other states. All were there in hopes they might catch a glimpse of the ivory-bill.

I am an avid birder myself, and since 1977 I've served as compiler for the White River National Wildlife Refuge Christmas Bird Count, an annual event sponsored by the National Audubon Society. I've long touted this area as one of the top birding hotspots in the South. But it always has been extremely difficult to find people willing to assist with the bird count.

This year, I expect I'll be overrun with people wanting to help. Most will participate for a single reason: They want to see an ivory-bill. And though the chances of that happening are slim, there is a chance, nevertheless.

In the coming years, thousands more will be drawn to the Big Woods, year-round, and all will come for that same reason: They want to see an ivory-bill.

This is a good thing, I think. And I've thought about it a lot.

You see, despite all our efforts to protect the Big Woods, this ecosystem remains one of the most threatened in the world. In particular, two controversial U.S. Army Corps of Engineers' water-development projects  the White River Navigation Project and the Grand Prairie Irrigation Project  could have devastating effects on these floodplain forests.

Before the ivory-bill, it looked like these projects might proceed, despite the terrible consequences. But after the ivory-bill, more and more attention has focused on the importance of the Big Woods ecosystem.

Many people now know what hunters and fishermen have known all along: The Big Woods are a national treasure and we must work hard to conserve this critical habitat, not just for the ivory-billed woodpecker but for the black bears, waterfowl and many other species of these unique woods.

I believe the ivory-bill and the people who come to see it will help save the Big Woods. What hunters and anglers could not do alone will be accomplished in partnership with bird-watchers, photographers, nature lovers and others who come in hopes of glimpsing an ivory-bill, and we'll all be the better for it.

The Big Woods not only will survive, they will expand; and future generations will come to cherish these beautiful bottomlands many of us have always loved.

It is important, however, for people to understand that sportsmen's contributions made it possible. Before there was an ivory-bill, hunters and fishermen were working to protect the Big Woods because they understood the value of such a place, with or without a nearly extinct woodpecker.

Today, while I was writing this column, the postman delivered confirmation that I am among a few hundred hunters who will receive a permit to hunt whitetail deer on White River National Wildlife Refuge during the modern-gun season in November. Three of my sons drew permits, as well.

We'll camp on the refuge as we've done several times in the past, and we'll hunt together in a tract of bottomland hardwoods far off the beaten path. We'll be searching for ivory-bills as we watch for deer.

Before the ivory-bill I did not fully realize the true importance of contributions from hunters like us. After the ivory-bill, however, I came to understand, in no uncertain terms, that without concerned sportsmen, without outdoorsmen who willingly contribute a portion of their hard-earned dollars, many places such as the Big Woods wouldn't exist.

I'm glad the ivory-bills are there. I hope we are lucky enough to see one. But more than anything, I'm glad the Big Woods are there so my sons and I have a beautiful place where we can hunt away from the crowds, a place that's still wild enough for ivory-bills  and for deer and ducks and bears, as well.